The Ballarat International Foto Biennale (BIFB) has purchased the heritage-listed former Union Bank building for $1.3 million, with plans for transforming the old building into a  National Centre of Photography. 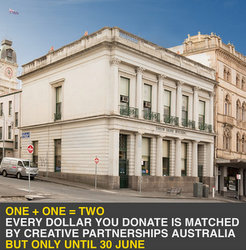 The former Union Bank building was built in 1863-4. The building requires significant restoration work, and BIFB is seeking donations from the public.

The 436-square-metre historic building on Lydiard Street South will eventually be the festival’s new home, replacing the leased  office space upstairs at the Ballarat Mining Exchange, which is currently also home to major exhibitions and functions held during the BIFB.

BIFB’s surprise announcement of the building acquisition came from nowhere – and it won’t come cheap.

It is a 155-year-old building in need of refurbishment, and the development plans are way beyond a simple renovation. The National Centre of Photography will consist of: the BIFB offices; two galleries – a contemporary temporary gallery and community space; a stockroom housing BIFB’s permanent collections, including the Martin Kantor Portrait Prize; a photobook library; a black-and-white darkroom; and one or two apartments for ‘artists-in-residence’. The building will be multi-functional, allowing for educational workshops, studio facilities, and other activities.

BIFB is looking for benefactors to help fund the centre, and aims to raise a total of $2 million to ‘obtain, design and construct a functional and sustainable community asset,’ the National Centre for Photography prospectus says.

BIFB Festival and Creative director Fiona Sweet was unwilling to share much in the way of detail when approached on behalf of the photo community by ProCounter. It appears the $1.3 million acquisition covers the ‘obtain’ goal, leaving a further $700,000 to design and construct the centre. This is speculative. ProCounter asked how much will it cost and when will it be ready and was told; ‘Lovell Chen Architects and Slatterys (are) working on the design and costings’.

‘Lydiard Street will be a magnet for tourism in Ballarat,’ Fiona told The Courier. ‘The National Centre for Photography increases the scope of creative offerings in the area while complementing the regionally significant Art Gallery of Ballarat and the contemporary Post Office Gallery. We are thrilled to be part of the re-activation of such a significant street.’

While the building is being developed – which will likely take several years – BIFB will need to continue to lease its current office space at The Mining Exchange.

The vision is ‘to create a photographic gallery of national significance in the heart of historical Ballarat. A space that engages the community and businesses, inspires photographic practice and puts photography at the forefront of art appreciation. We aim to support best practice and be financially self-sustaining.’

The business name, National Centre for Photography, was registered with ASIC in March.

Donations are coming from ‘generous philanthropists and benefactors’, The Courier reported. Who they are remain a mystery – Fiona told ProCounter it’s ‘not for public reading’.

Beyond the philanthropy, BIFB is the recipient of numerous state and federal government grants.

It’s currently promoting the Creative Partnerships Australia Plus1 grant. Every dollar donated to BIFB by the public is matched by the organisation, which ‘promotes private sector support for arts and culture’.

There is currently little in the way of photo industry involvement in BIFB, apart from Ilford as ‘Lead Partner’. Under the stewardship of founder and inaugural creative director Jeff Moorfoot BIFB was much closer the photographers and photography. Under Fiona Sweet the event could be characterised as more a property of the broader Melbourne arts community.

In 2017, Fiona’s first outing as festival director, BIFB attracted 26,000 over the four weeks, down around 20 percent from Jeff’s sixth and last festival in 2015 which brought in 31,000 festival-goers.

The Ballarat International Foto Festival takes place every two years. Until now it has run for a month in winter/spring. The next festival in 2019 will run for two months, from August 23 to October 20. .

One thought on “‘National Centre of Photography’ for Ballarat”