‘Superficial and materialistic’, ‘too commercial’, ‘grotesque and beautiful’, and ‘inspirational’, are the polarising terms often used to describe pictures by renowned fashion photographer, David LaChapelle, whose exhibition is the centrepiece of the seventh Ballarat International Foto Biennale (BIFB). 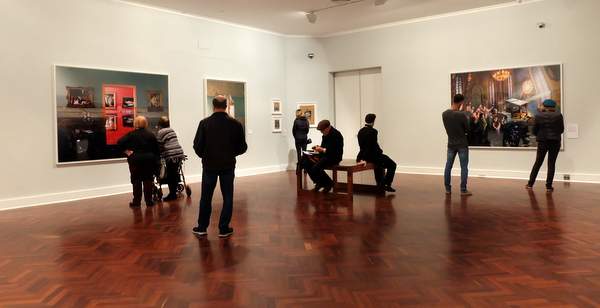 For a drab and dreary mid-week, the LaChapelle exhibition was busy. BIFB encourages visitors to Ballarat during the coldest time of the year.

BIFB is a non-profit month-long photography festival which rolls around once every two years. The festival brings over 100 exhibitions from international and local photographers to Ballarat, along with a jam packed schedule of workshops and events.

It’s LaChapelle’s first solo Australian exhibition, and a major draw card for the seventh edition of the festival.

BIFB banked on LaChapelle’s 60 ‘hyper-realistic’ photos, currently on show at the Art Gallery of Ballarat, to bring a crowd to the historic regional Victorian city.

It’s a new approach for the festival to have a headline act, a ‘blockbuster’ exhibition.

BIFB focussed the festival’s marketing campaign primarily around the exhibition – a Vline train in Melbourne was wrapped in a LaChapelle photo, for instance. 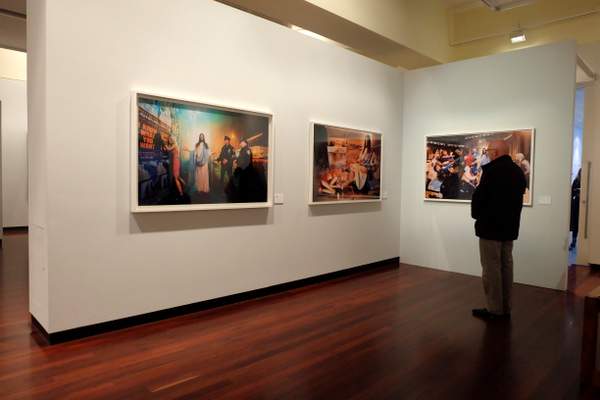 Photos from the Jesus is my Homeboy series, 2003.

The photographer is Andy Warhol’s Interview magazine protégé. The king of pop art discovered LaChapelle while he worked as a bus boy at the world famous Studio 54 nightclub in New York. From there he rose to fame, making millions from fashion shoots, music videos, and portraits of celebrities.

His high-gloss images are dripping with colour, famous faces, and nudity. He obsessively connects contemporary society with religion or historic art periods, often to form a social message.

It’s understandable why LaChapelle has detractors and admirers. His unique style is kitschy, and full of saturated, eye-popping, and elaborate detail.
The fascinating pictures make more sense viewed up close and in the flesh, rather than from the screen of a handheld device – today’s most popular photo viewing platform.

The prints are massive and transport the viewer into LaChapelle’s dreamlike fantasy world. It’d take a hardened art critic not to feel immersed in it, and walk away in awe – or at least impressed.

The exhibition came to Ballarat in large shipping containers and at a large cost, with it being the first BIFB show to be ticketed. But it has paid off – the exhibition has been a success, and this reflects the festival as a whole. 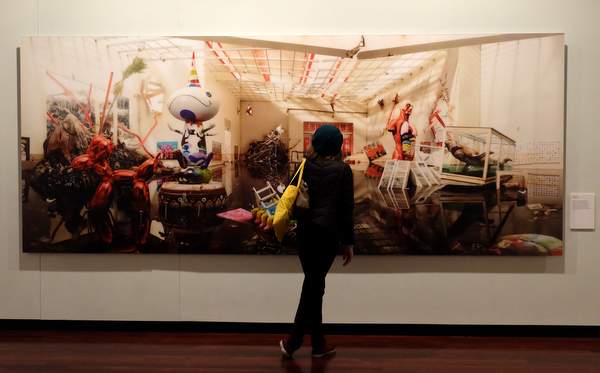 ‘It appears, as usual, to mainly be Melbourne (attendees) but quite a few are from Sydney – more than in the past,’ BIFB director, Fiona Sweet, told ProCounter.

She is an experienced artistic director, and founded the successful Melbourne design agency Sweet Creative, which works predominately with arts organisations.

The event is primarily funded by government organisations. The Australian Council of the Arts, Festivals Australia, Vicotoria State Government, The City of Ballarat, and Visit Ballarat all support the festival.

The photo industry is also onboard, with Ilford holding the title of ‘lead partner’. Nikon and Momento Pro are major partners, while Camera House is a supporter.

It looks like BIFB is secure under Sweet’s direction.

The Core program, shown at eight venues, follows the theme ‘performance of identity’.

Performance of identity has resulted in the festival adopting a socially progressive political edge. It’s loosely defined by Sweet as ‘how genders and cultures are globally unequal’.

For good or for worse, the Biennale is steeped in identity politics – a departure from previous iterations.

Most of the exhibitions address social issues of gender, sexual orientation, race, migration, colonialism, and so on. (‘Cept A Field Guide To The Stars exhibition at the Municipal Observatory, and the Martin Kantor Portrait Prize exhibition at Ballarat Town Hall!) 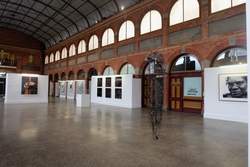 Some may recognise the portrait on the right, taken in 2000 by Ricky Maynard, of Wik Elder, Gladys.

Tell, an exhibition of contemporary indigenous photography curated by arts teacher Jessica Clark, has taken over The Mining Exchange, a huge heritage listed space built between 1887-9.

The Gold Rush era was a major driver of Australian colonialism, and The Mining Exchange played an important role in this history – it’s where shares in mining companies were traded.

Hosting Tell within these walls has symbolic significance. The pictures explore themes of indigenous identity and experience, which radically changed when dispossession was brought about by colonisation. 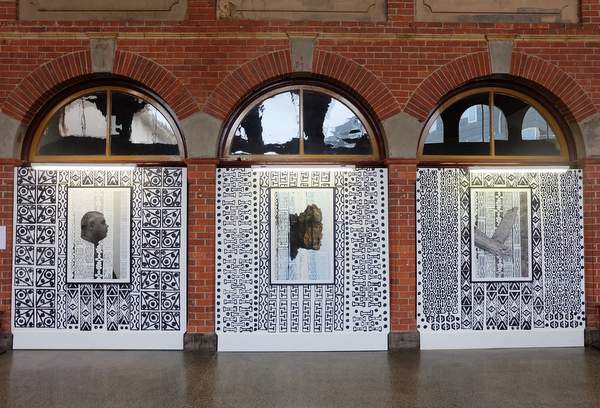 The Pitcha Makin Fellas, a Ballarat indigenous art group, painted behind these photos prior to launch.

Tell has works ranging from art installations, through to fine art and portraiture.

‘Rearranging Boundaries brings together leading documentary photographers and visual activists from some of the most reported and scrutinised upon regions of the globe to showcase and counteract underreported and often misrepresented depictions of their homelands. Each photographer in the exhibition narrates a nuanced alternative to mainstream media generalisations.’ 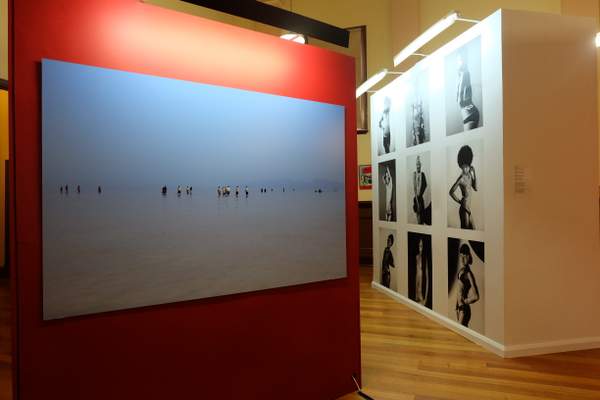 ‘Each photographer had to be living and working in the place that they had originated from,’ Aaron Bradbrook told 3CR Radio Melbourne. ‘Each artist tackles, seeks to overcome, or shows the way they deal with issues within their country. It’s taking that perspective away from a dominant Western view and looking from within. It’s a rare opportunity, when audiences are used to Western media. You rarely get this notion of what’s going on from an insider’s perspective.’

A leading example in the exhibition are the photos by Habjouqa, who captures the everyday life of those living within the Palestinian-Israeli conflict zones. Western media often broadcasts scenes of death and destruction from places like Gaza, but Habjouqa shows how life goes on despite the challenges faced by all.

The Outdoor Public Program, made up of six installations dotted across town, will likely be the first taste of photography for visitors.

Those driving into Ballarat will be greeted with large boards set up in the Sturt Median Strip showing veiled Iranian women with objects, like frying pans and teacups, covering their faces. These are from the series Like Every Day by photographer Shadi Ghadirian.

The walls along the Police Lane, next to the Art Gallery, and down into the arts precinct, are covered with paste-up posters of pictures by another Iranian, Gohar Dashti.

Look elsewhere and more public installations appear. An element of discovery and exploration is delivered with the outdoor installations. It has been a ‘huge success’, and a highlight for many BIFB attendees this year. Expect it to grow for the 2019 event. 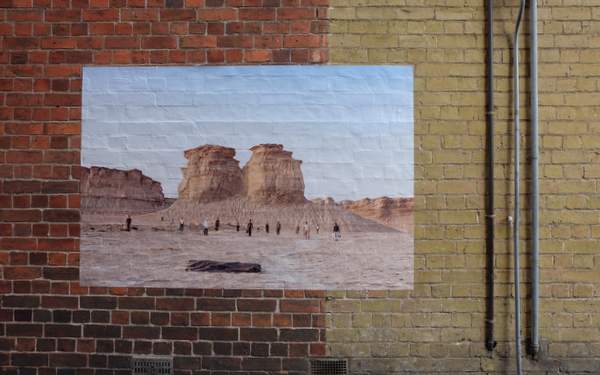 The weird and wonderful Fringe Program
The Fringe program fattens out the festival to venues throughout town, and features something for everyone.

Over 80 open-entry exhibitions are showing in cafes, bars and pubs, galleries, shops, commercial spaces and so on.

The Core Program can be knocked out in a day, but it’d be a shame to not spend an extra day discovering this crucial part of the festival. It has an egalitarian vibe – open to photographers of all styles and credentials.

Pretty much anyone capable of pulling an exhibition together, impressing a venue owner, and paying a registration fee can have their work shown.

The result is that student and emerging photographers, some who are exhibiting for the first time, appear in the program alongside well-known names in photography from around the world.

BIFB provides opportunities, and fosters creativity among photographers through the Fringe Program.

It’s certain BIFB is a starting point for many, and it’s likely some of the exhibitions wouldn’t otherwise visit Australia or ever be shown due to gallery prerequisites and barriers to entry. This is just one reason why festivals like BIFB, and Head On in Sydney, are crucial for photography in this country

The best way to find Fringe exhibitions is to simply walk around town, and head into any venue advertising an exhibition out the front. Everything is listed in the program, but sometimes it’s best to keep up an element of surprise.

The City of Ballarat has signed on for the 2019 edition of the festival, and hopefully this contract will be renewed for many more years.

– The Ballarat International Foto Biennale is on until September 17

One thought on “LaChapelle puts Ballarat on the map”