The 10,000 Apple ‘Shot on iPhone’ billboards, described as a global gallery exhibition which toured 25 countries last year, was the tech-giant’s reminder that ordinary iOS users are capable of capturing a professional photo. All it takes is an Apple iPhone 6, with 8-megapixels.

The award-winning advertising campaign; which also appeared online, in magazines, newspapers, and TV commercials; was seen over 6.5 billion times, Apple said, and it’s back again.

Apple, through its advertising agency TBWA/Media Arts Lab, approaches amateur and professional photographers on platforms like Flickr and Instagram with a cryptic message and a project codename.

The agency is mysterious throughout the correspondence to bait the iPhone photographer, however it’s the strict non-disclosure agreement indicating serious business.

Once the client’s name is revealed the photographer realises they’ve won Apple’s equivalent of a Willy Wonka Golden Ticket – to be featured in the World Gallery campaign.

The advertising campaign has other Willy Wonka factors, as iPhone photographers have since joined the hashtag #shotoniphone fever in an effort to be seen by the agency. Only a few hints and stories are out there to assist others to make it in the club. (Hint: take pretty photos, and leave no shortage of iPhone related hash tags)

‘This has been an unreal experience. I am extremely proud. I drove to Milan just to see it on a billboard’ Flavio Sarescia, a dog food salesman from Switzerland, told Cult of Mac about his travel photo featured last year. Shortly after he licensed the photo to Apple he created a website portfolio for his photography to ‘maybe get lucky’ again. 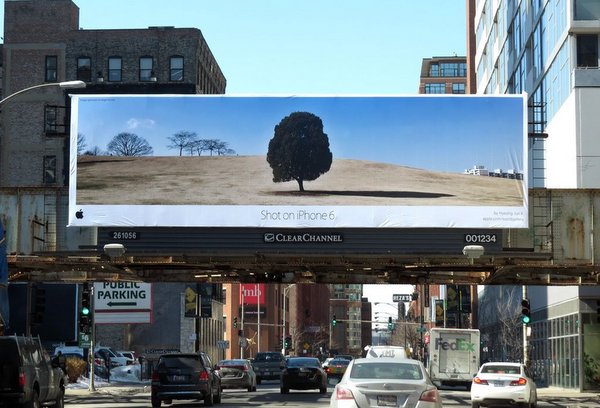 A huge billboard in Chicago.

Jordan Ison, who was featured in this year’s campaign, told TechCrunch that the non-disclosure agreement created huge secrecy among the chosen photographers. Most are too afraid to even mention the name of the agency – which is public knowledge.

While Ison was paid ‘much better than I would normally be for a stock image’, it was less than US$2000 – a random number suggested by the TechCrunch journalist.

Few people attempted to negotiate the fee as they had no clue what rate could be commanded for licensing a photo appearing in a multi-format worldwide ad campaign. However Cult of Mac reports some found out the professionals negotiated a higher fee.

Perhaps Austin Mann, a US travel photographer known for embracing the iPhone, did – he had two photos and a timelapse video featured in Apple’s campaign. Mann has worked alongside Apple previously, he may be considered an unofficial ambassador.

As a fairly young photographer with 86,000 Instagram followers, he offers insight into how future travel photographers may operate carrying no more than a smart phone. Coincidentally the majority of Apple’s campaign photos fit the ‘travel photography’ mould.

Closing the gap
The ‘Shot on iPhone’ campaign is classic Apple, minus the product shot. It shows off its customers’ creativity and the power of the technology, while giving viewers a warm fuzzy feeling. 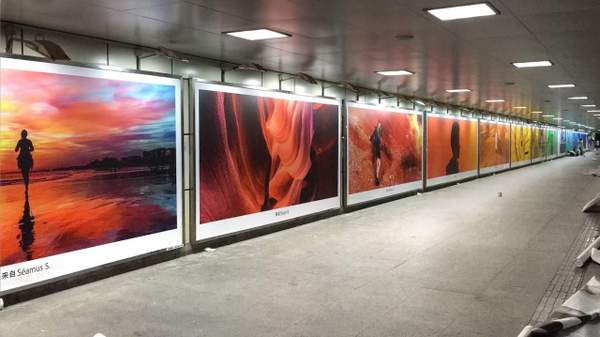 A rainbow in Shanghai.

The main message Apple fan blogs, tech news publications like CNet, all the way to immensely popular websites like Buzzfeed, took from the campaign wasn’t that iOS was better than competing smartphones.

It was Apple declaring ‘the gap between phones and cameras is gone’. Capturing a commercial photo worthy for print in a newspaper or magazine, or on a billboard, requires only a pocket-sized camera phone and some eye candy.

A solid argument after seeing some of the large billboards.

Sceptics in photography forums report the billboards visually collapse when viewed from a closer-than-intended distance, however many large adverts are printed at a similar resolution even if shot with a 50.6-megapixel Canon 5Ds.

But the company isn’t performing as well as it would like – the campaign has done little to curb falling iPhone sales.

This quarter sales dropped 15 percent. In 2015 it sold 47.5 million iPhones this quarter, but now this has reduced to 40.4 million.

TBWA may distance itself from this figure and point to the big 6.5 billion sets of eyes that passed a ‘Shot on iPhone’ ad, but the sales aren’t there to back it up.

Three Aussie iPhone champions
Glenn Homann, a keen amateur photographer from Queensland, was among three Australians to win the top spot at the ninth iPhone Photography Awards, taking out prize for the Panorama category.

He can’t justify buying a DSLR as a hobbyist and echoes the message taken from the Apple campaign – that the smartphone can compete with a DSLR provided the subject photographed in interesting.

Kevin Casey, a 60-year old iPhone photographer, won the Others category for a shot of local kids lining up to jump off a ledge in Botany Bay. Like many he ditched his point-and-shoot camera, a segment of photo retailing hit hard by smartphone cameras, a few years ago. For him the iPhone camera is a delightful replacement.

Nicky Ryan, a freelance photographer and iPhone aficionado from Sydney, won the Sunset category for a image taken at Bronte Beach. She said its her iPhone which gives her the freedom to spontaneously take photos when it’s impractical to lug around clunky Canon gear, such as on an early morning walk when this photo was taken. 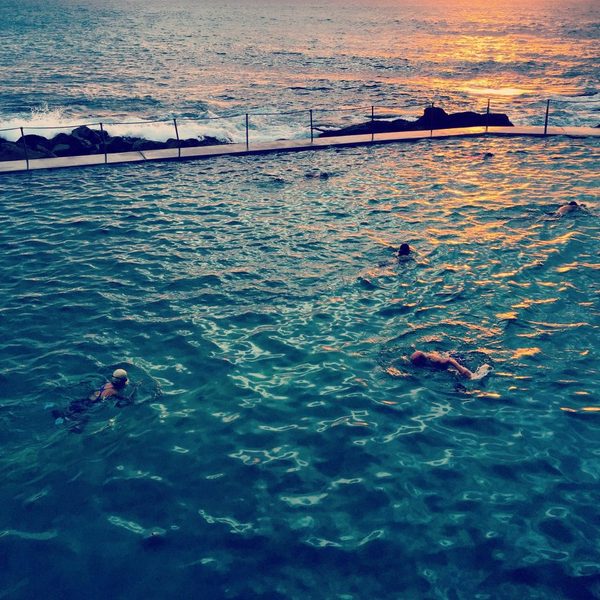 Nearly all of her 1400 plus Instagram photos are taken on her iPhone – as a tool it has earned a legitimate place in her business, particularly for the social media.

While Apple and its fans may enjoy the idea of the iPhone replacing DSLRs and other high-end cameras, it’s a long way off.

But since the iPhone burst onto the scene nine years ago with a 2-megapixel camera there’s been fairly serious upgrades to the image sensor and camera.

Smartphones have passed point-and-shoot compacts, forcing them to its knees. With accessories like lenses and tripods becoming popular, along with Apple commitment to continuing this advertising campaign, it looks like consumer DSLRs are next in sight. What’s next?