Veteran US photojournalist Steve McCurry has had his work put under the magnify glass after a photographer noticed substandard Photoshopping in one of his prints on display at Le Venaria Reale in Italy. 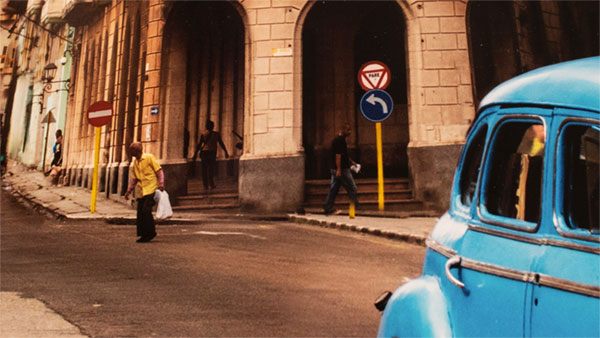 McCurry said it’s up to the exhibition curator to decide whether or not to take down the print, which will be hung until September 25 in Turin, Italy.

‘Internet detectives’ have since unearthed two more photos with clear evidence of ‘excessive post-processing’ where details in an image, including people, have been removed.

Italian photographer Paolo Viglione posted about the first instance on his blog and coupled it with a close-up of the Cuba street photo (above),showing a street sign vanish behind a man’s leg. He removed the post shortly after, fearing it would result in an attack on the Magnum photographer.

In an interview with Italian news website la Repubblica, McCurry explains it was a one-off mistake, and that while he takes ‘full responsibility’ a (former) lab technician was behind the error. He said he would have ‘never authorised’ such a change, but didn’t have time to review all the exhibition photos as he was travelling at the time. (ProCounter comment: Really!?)

McCurry added that altering contrasts to remove attention from a minor detail; squaring an image to balance it; and darkening the background of a portrait to focus on a facial expression is fine. But ‘moving elements’, like in the Cuba photo, is not an ethical practice in his book.

During the interview he highlighted that he’s a ‘visual storyteller’, and his works are personal projects captured as he travels the world. That is, he was distinguishing this work from photojournalism.

A similar message was given to photography blog, Petapixel, explaining his career in photography began in 1979 as a photojournalist in Afghanistan, but he’d define his recent work as ‘visual storytelling’.

‘Much of my recent work has been shot for my own enjoyment in places I wanted to visit to satisfy my curiosity about the people and the culture. For example, my Cuba work was taken during four personal trips. My photography is my art…,’ McCurry said.

Jerry Galea, RMIT industry fellow and lecturer for photojournalism, told ProCounter that the label ‘visual storyteller’ provides some leeway for manipulation, but as a sub-genre it’s more photojournalism than anything else.

‘Under the tag name of “photojournalism”, which people rely on to see, read and understand a story as a real event, there should be no manipulation (of this kind). It’s incredibly important not to brandish the name of photojournalism in a negative way,’ he said. ‘As soon as a picture is tagged as something else – like conceptual fine art or visual storytelling – that does give room to manipulate to a certain degree.

‘I see what he’s saying, but I’d think “visual storytelling” is still under a “narrative genre” of photojournalism. Anything closely associated with photojournalism (involving manipulation) is a no-go for me.’

McCurry’s explanation relies on distinguishing the difference between a photojournalist who documents events as they occur, and a ‘storyteller’ who captures a scene as art.

But even as a storyteller there is surely a difference between telling a true story and playing with the facts.

It seems the Cuba photo isn’t a one-off ‘error’. 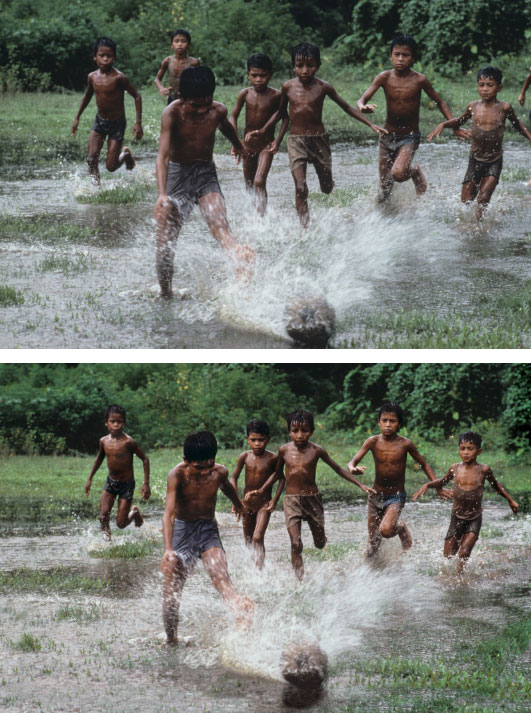 Two more photos have emerged showing what looks like cloning – things McCurry would ‘never authorise’. One photo, captured in 2009, shows young boys playing soccer in Bangladesh, and another shows two men being pushed along in a rickshaw in the rain.

In the 2009 photo a boy has been edited out, as well as another person’s arm. The photo had been published on the Magnum website, but has since been removed.

‘I understand why it was done – it’s a little confusing to see that little boy behind the first boy’s head. It looks more clear aesthetically without him,’ Galea said. ‘But on an ethical stance it’s completely wrong to do. I say that mainly because our industry, photojournalism, is the last area of photography that needs to be clear and honest with what it does.

‘Other forms of photography – it’s fine to manipulate. But we have a responsibility to the general audience to say it as it is.’

In the other photo more editing is noticeable. Two men and two carts have been removed, as well as other details. 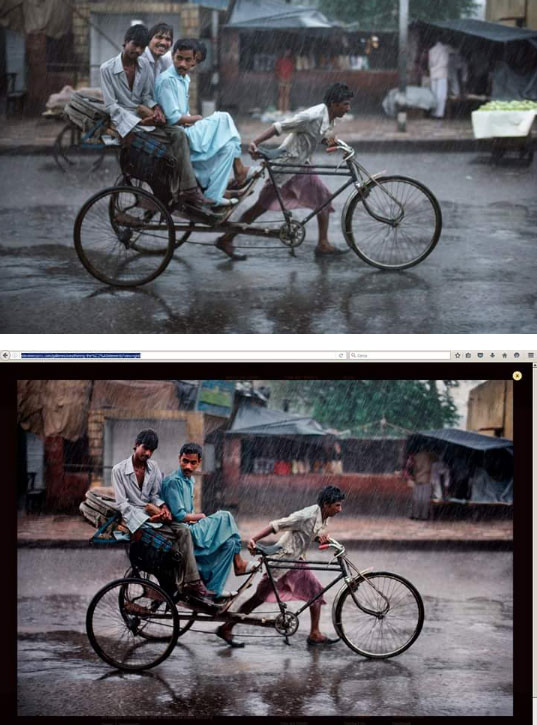 Petapixel has presented the latest round of images to McCurry’s team and is yet to hear a response.

Galea said his photojournalism students are divided when it comes to photo manipulation. They are first introduced to staging images, which, provided the scene could be real or it’s a re-enactment, is ‘perfectly fine’. If the Oxford University study, The State of News Photography, is any indication of an industry consensus, then most photojournalists would agree with Galea.

‘But then we move into manipulation after a photo was taken. I don’t allow my students to do this, especially cloning. In class it’s always a very divisive conversation among students,’ he said. ‘Every photographer has to work out where they stand, but overriding that is this general idea in the profession of what you can and can’t do. Although it hasn’t been properly laid out.’

Galea says that for his own editorial work he sets himself a ’20 percent rule’. This rule allows him to darken, lighten, or vary the contrast of an image within 20 percent of the in-camera photo. He believes that’s roughly in accordance with traditional dark room post-processing. But anything beyond that, for him, is ‘dangerous territory’.

‘It’s not as easy line to walk. Manipulation and adjustment becomes a grey area pretty quickly. But in the McCurry examples, it quite clearly shouldn’t have been done.’

What does the ProCounter readership think. How far is too far?

One thought on “McCurry’s ‘storytelling’: true or false?”