A recent high-level global study, ‘The State of News Photography‘, has surveyed 1556 photojournalists from over 100 countries to reveal 20 key findings about the current state of news photography. 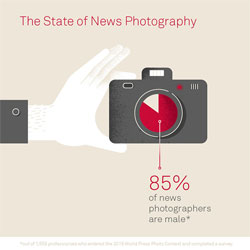 According to the study, the average photojournalist is a self-employed man aged 30-50 who makes less than US$30,000 and receives supplementary income elsewhere.

Some of the findings paint a portrait of the average photojournalist and show areas where they’re united universally, while other statistics suggest a divide – especially when photo manipulation and staging shots is the topic.

For instance, the industry is dominated by male photographers and most photojournalists have obtained university-level qualifications, yet earn only around US$30,000 on average.

Which might explain why over half of photographers surveyed ‘sometimes’ stage images to get the job done!

‘This is certainly contrary to codes of practice at most news organisations and indicates an important gap between the codes and what happens in the field,’ the research said. ‘It suggests that the idea of the photographer being a fly on the wall and not in any way affecting the news event or issue they picture must be revised.’

This finding is likely an eye-opener for the World Press Photo Foundation (WPP), which commissioned the study with Oxford University’s Reuters Institute for the Study of Journalism. WPP has taken on the task to establish an industry standard for photo manipulation recently by controversially stripping Giovanni Troilo of his World Press Photo award for staging photos this year, as well as disqualifying a large number of finalists for image manipulation two years in a row.

While manipulating images ‘in real time’ is not considered overly sinful, the same cannot be said for digital manipulation. Seventy-six percent of respondents view adding or removing content digitally as a ‘serious problem’, while the remaining 25 percent ‘at least sometimes’ manipulate images beyond cropping.

And only 10 percent of news photographers never enhance RAW files by post-processing the contrast, hue, tone; over half always or often do it.

These findings, which came by surveying photographers entering the WPP contest, show that they do not always see eye-to-eye on image manipulation and staging. Are the 76 percent who view manipulation as a serious problem rightfully concerned, given a quarter of their colleagues have manipulated images?

Fortunately nearly all survey participants agreed that understanding ethics is important, and that the digital era has added ‘new complexity and uncertainty to the professional ethics of photojournalism’. This hasn’t much to do with the rise of citizen journalists and user-generated content, as the majority of photographers said they feel ‘neutral… or see it as a positive development’. 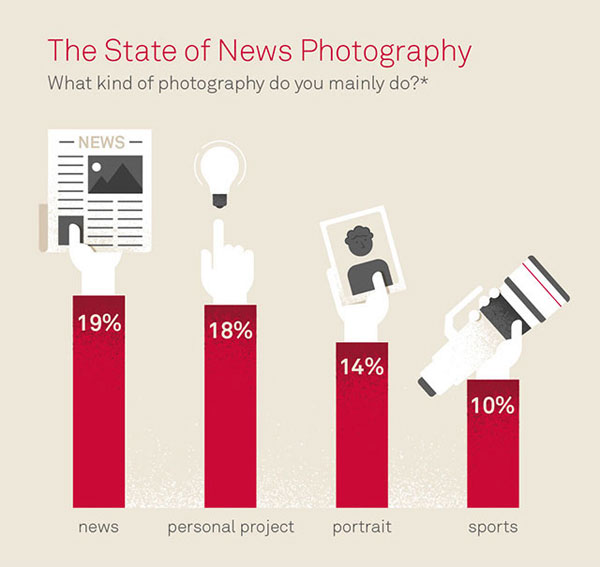 All respondents used for the image manipulation data identified as photographing news.

It’s of little surprise that unauthorised use of photos is widespread, and photography can be a dangerous occupation – 90 percent said they felt vulnerable to the threat of physical risk or injury at some stage. Respondents rated South America, Central America and the Caribbean as the most dangerous regions.

Personal websites are important to 63 percent of respondents and more than half often or always use social media. Only 11 percent steer completely clear of social media.

And while Instagram is the social media handle focused on image consumption, Facebook is the preferred platform with 62 percent ranking it number one.

The glass is half full for around half of the photographers surveyed; 55 percent feel mostly or always positive about the future, despite the testing times.

Let’s hope this statistic is representative of Australian photojournalists – only 16 of the 1556 surveyed are from here, equaling 1.2 percent of respondents. Europe has the highest number of respondents with 816 photographers being surveyed, or 52.7 percent.

It’s intended that this research will continue annually to track changes and circumstances affecting professional photographs, and to examine the impact the digital era has/will have on photographers’ livelihood.