When signing up to any image hosting service or portfolio website, professional photographers are usually in tune with how important it is to read the terms and conditions. But not everyone is that savvy. 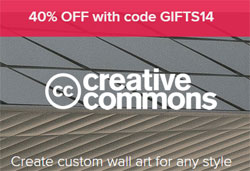 Amateur and enthusiast photographers have recently expressed their disappointment with the Yahoo-owned photo sharing website, Flickr, after finding that the website is selling their photography as wall art and taking all the profit.

Of course, Flickr is doing this legally by taking advantage of the Creative Commons license that these photographers agreed to when uploading their photos to the website. There are many different types of Creative Commons licenses, but the particular license that the photographers agreed to permits anyone to use the images however they like, including Flickr.

One of these photographers, Liz West, has almost 12,000 images on the website, most of which were being flogged for US$49 a print by Flickr according to The Wall Street Journal, with only a small sticker of her username for attribution.

‘It ticked me off that somebody else is selling them when I was giving them away,’ she told The Wall Street Journal. She has since removed the licenses from her images.

Another photographer said he believed his images were being licensed for things such as articles or other works that’d be shown to the public, and not for Yahoo’s gain. However, eight of the 14 photographers the publication asked said they were happy with the extra exposure.

It’s worth mentioning that Flickr also ‘handpicks’ professional photographer’s photos that are signed up to the service (and don’t grant a Creative Commons licenses) and receives permission to run off prints, with a 51 percent cut going to the photographer.

Spokespeople for photo sharing sites 500px and DeviantArt both questioned the ethics of Yahoo’s move to profit from it’s members after being asked and Flickr co-founder, Stewart Butterfield, who is no longer with the company, said ‘it’s hard to imagine the revenue from selling the prints will cover the cost of lost goodwill’.

Offering international shipping options for what would be hundreds of thousands of Creative Commons licensed images for a fairly low price is also likely to cut into the number of potential customers browsing individual professional photographers prints. Especially when Flickr can undercut the market with deals such as the current ’40 percent off Holiday Sale’ currently being offered. But then again, Ikea and similar businesses also offer a range of cheap wall art.

At least it’s clear that while the free terabyte of data Flickr offers users does seem charitable, the company is always looking for different streams to generate revenue.