It is unknown when Sony’s new patented curved image sensor technology will be available to the public, but an image captured with the technology has appeared online begging many to speculate it will be sooner rather than later.

The image was published by Japanese business website, Nikkei, which required some Google translating to decipher. 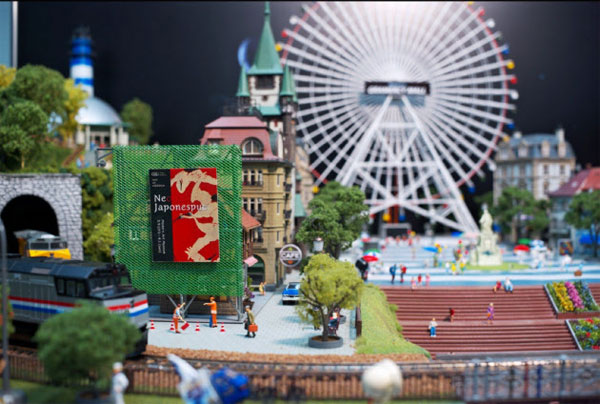 The image Nikkei published does show a shallow depth of field of a model town. A strange choice of imagery to debut the technology, don’t you think? Soure: Nikkei.com

The article didn’t reveal much more than what is already known about the technology, which photo retailing and affiliate website, Photo Counter, covered two weeks ago.

‘A curved sensor mimics the shape of the human eye,’ Photo Counter wrote. ‘According to Sony its curved CMOS BSI sensor and an integrated lens will deliver close to zero light loss in the corner of the images and create a great deal less curvature aberration. It will also be capable of richer blacks.’

The technology was showcased at the 2014 VLSI (Very Large Scale Integration) Symposium in Hawaii last month.

One can make their own judgement about the picture, which is an interesting image choice to debut the technology – nothing indicates it is more advanced than other sensors. In due time it will be revealed exactly how ‘revolutionary’ Sony’s new sensor is – but at least we know that the technology is well on its way.

It is unlikely that Sony will ‘give’ this technology away, especially if it works as well as the hype suggests. But there is a possibility that it may end up being used in Nikon cameras. It has been reported by Nikon Rumors that Nikon has utilised Sony’s sensor technology before – the D800, D7000, and the D3x all use Sony sensors. Either way, now that there has been an image released, Photokina seems to be an appropriate event for Sony to demo a prototype and reveal more information regarding how the technology stacks up.

While on the subject on recent patents, Canon and Microsoft have ‘broadened their strategic alliance with the announcement of a broad patent cross-licensing’ last week.

In a press release published by Microsoft, the agreement will cover ‘certain digital imaging and mobile consumer products’. This suggests it could be a collaboration to further the Nokia Lumia smart phones’ camera performance. The current model, the Lumia 1520, features a 20 megapixel camera. Dpreview also speculates that Canon cameras may benefit from ‘some of Microsoft’s and Nokia’s mobile wireless knowledge’. Then again, the press release states that the ‘contents of the agreements will not be disclosed’ – it is just as likely to be related to a cross-licensing of Canon’s medical imagery products and office products as it is to be strictly Canon’s photographic products.