Famous high-end fashion photographers, Bruce Weber and Mario Testino, have had multiple allegations of inappropriate sexual behaviour in the workplace levied against them by male models and assistants.

Both photographers vehemently deny the allegations and there has been no proof provided to support them. One individual among dozens making accusations has taken legal action.

Pre-Weinstein, claims made against the powerful photographers fell mostly on deaf ears.

But an  damning article published by The New York Times in January claims the two photographers are known across the industry for exploiting male models. However, these whispers rarely left fashion’s inner circles until now.

It was claimed Weber would ask the model to get undressed and breath, while guiding Weber’s hand with their own to body parts where they felt energy. The models would touch their shoulders, face, chest, stomach, and then Weber would allegedly take control, guide the hand to inside the models mouth, and another body part described by one model as his ‘root chakra’.

Model Jason Boyce, who filed a lawsuit against Weber in December 2017 and was one of the first to go public with his experience, said he was warned by other male models about the photographer’s ‘weird’ sexual passes.

Weber denies the breathing exercises involved touching models inappropriately, and says he’s ‘shocked and disheartened by the outrageous claims made against me’.

‘I have used common breathing exercises and professionally photographed thousands of nude models over my career, but never touched anyone inappropriately,’ Weber said in a statement to The Times. ‘Given my life’s work, these twisted and untrue allegations are truly disheartening. I’ve been taking pictures for over 40 years and have the utmost respect for everyone I’ve ever photographed. I would never, ever, try to hurt anyone or prevent someone from succeeding – it’s just not in my character’.

Since The Times article, four more models who previously worked with Weber spoke with fashion trade publication, Business Of Fashion, with experiences that question the integrity of his statement.

Model D.L Janney claimed that in 1982 he refused Weber’s request for a complete nude shoot, and after refusing to pretend his brother was his boyfriend for a shoot, the photographer verbally abused and blacklisted him from further shoots. He claims that this led to him failing to find new work, effectively ending his career.

Model Christopher Cates said Weber touched him inappropriately in 2006 and photographed the incident. Another model, Alex Geerman, experienced the same ‘breathing exercise’ routine, however he claims it wasn’t a ‘sexual thing’, but an ‘art thing’.

Model Ryan Locke, who described Testino as a sexual predator, said that during a casting shoot for Gucci, the Peruvian photographer told the crew to leave the room because Locke ‘wasn’t feeling it’. He claimed Testino locked the room and made an aggressive physical sexual advance on him.

– And so it goes on (and on).  Those of a more voyeuristic bent can read the nitty gritty from The Times here.

Testino’s lawyers told The Times the 13 individuals cited ‘cannot be considered reliable sources’, and they spoke with former employees who are ‘shocked by the allegations’.

Blurred lines when selling sex
For male models, it would be a poor career decision to turn down a shoot with either photographer. The Times reported that models would often go in to a shoot with warnings from colleagues or managers about being pressured to pose naked. Some knew they may be ‘Brucified’, as it was apparently labeled, during breathing exercises.

The models who came forward said there’s many more with similar experience, but they fear appearing ‘difficult’ would damage their career.

Others in the article requested anonymity for fear of losing jobs – work has a strange way of drying up after speaking out, refusing to pose naked, or appearing uncomfortable about being made do certain things. 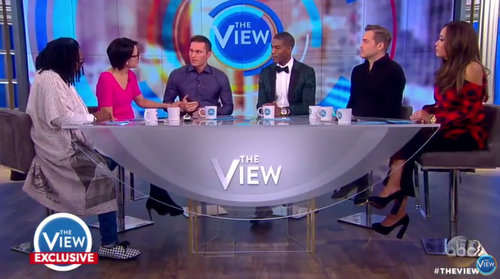 Three male models Josh Ardolf, Bobby Roache, and Jason Fedele, who were sources in The Times article, speaking about Weber, Testino, and the industry on US TV talkshow The View. Source: Screengrab/YouTube.

The Times article asserts a greater issue exists within the fashion industry: there’s no clear boundaries when selling sex.

When the job demands models pose naked and appear seductive, and a model’s success is measured with how sexually desirable they appear, behaviour behind the scenes can quickly get out of hand.

While it’s granted there’s more verbal and physical workplace contact occurring in fashion than most other industries, many models now want to establish clear boundaries that will protect them.

Fashion looks into the mirror
The Times article says there’s an ugly blame game between brands and magazines, which condemn model agencies for not protecting models, and agencies holding brands accountable for hiring photographers with bad reputations.

Mass media publisher Conde Nast – which publishes Vogue, Vanity Fair, and GQ – has cut ties with the two photographers, along with controversial fashion photographer Terry Richardson late last year. If these claims are as rife and long-standing as The Times claims, it beggars belief that Conde Naste editors would not have been aware they were putting models in jeopardy when hiring the two favoured photographers. But now, sniffing the zeitgeist, the publisher is taking steps to end its apparent complicity.

Both Testino and Weber have been regular contributors to Conde Nast magazines, with Testino contracted to stand in as guest editor of the April 2016 Vogue Australia Magazine, which featured photos he captured in the country.

‘We are deeply disturbed by these accusations and take this very seriously — as previously noted in our statement regarding sexual harassment,’ Conde Nast said in a statement. ‘In light of these allegations, we will not be commissioning any new work with them for the foreseeable future.’

Vogue US long-time editor-in-chief, Anna Wintour, said both men are ‘personal friends’ – the decision was both professional and personal.

‘I believe strongly in the value of remorse and forgiveness. But I take the allegations very seriously, and we at Conde Nast have decided to put our working relationship with both photographers on hold for the foreseeable future.’

Conde Nast has responded with a new Code of Conduct – guidelines for outside contributors. It will not commission shoots with models under the age of 18, unless appearing as themselves in an article; no alcohol on set; no photographers can use Conde Nast sets for work not commissioned by the company; and shoots with nudity, racy clothing including swimwear, or simulated drug use must be approved in advance by the subject.

The Deichtorhallen, an art center in Hamburg, Germany, has suspended an upcoming Weber retrospective exhibition.

It would appear the allegations have ruled Testino is out of the running to photograph the royal wedding, despite capturing Royals several times during his career.

He was supposedly the front runner for photographing Prince Harry and Meghan Markle’s wedding, having captured Prince William and Kate Middleton’s engagement and the last official portraits of Princess Diana.