The Nikon D850 has dethroned Sony’s a7R II from the top of the DxOmark camera ratings chart, with the independent testing lab describing the camera’s sensor as ‘breaking new ground for image quality’. 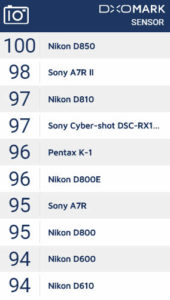 Interestingly, Canon doesn’t make an appearance in the top 10 DxOmark chart, with the 5D mk IV coming in at 16. Source: DxOmark.

The D850’s new 45.7-megapixel backside-illuminated (BSI) sensor, designed in-house by Nikon, has scored 100 points by DxOmark, two points higher than the A7R II at 98. This makes it the best camera DxOmark has tested.

In a comparison which will be seen as odious to Canon fans, the top Canon camera in DxO’s ratings is the Canon EOS 5D Mark IV, with a score of 91 and a ranking of 17th. There are only two Canon cameras in DxO’s top 30.

The sensor is said to have improved low-light capabilities along with readout speed and overall performance.

‘BSI sensor technology, in theory, enables the pixels to capture light more efficiently, giving a boost to dynamic range, color, and signal-to-noise performance, particularly at high ISOs,’ DxOmark’ review says. ‘What’s more, omitting an optical low-pass filter on the D850’s sensor (historically used to reduce unwanted moiré effects on high-frequency details) gives the D850 a further boost for sharpness. To be fair, this is less of a big deal, as leaving out the low-pass filter isn’t unusual on high-resolution chips nowadays, since they’re able to capture very fine detail without moiré.

‘But it all adds into the mix: combine the D850’s massive resolution with improved light-gathering capabilities, and we should see some exceptional image quality.’

‘Offering outstanding dynamic range of 14.8 EV and colour depth of 26.4 bit at base ISO, combined with its massive 45.7Mp resolution, the D850 is a mouthwatering prospect for landscape, studio, portrait, as well as high-end editorial or advertising photographers who are  seeking top-notch image quality for large-scale reproduction and display.

‘Its low-light ISO (Sports score) of ISO 2660 doesn’t quite live up to its other scores, but it’s still a very acceptable result, and taking into account sensor size, resolution, and resulting pixel pitch, the D850 fairs pretty well for ISO performance.’

DxOmark says that at base ISO, D850 image quality is ‘unrivalled for a DSLR’, however two Sony mirrorless cameras, the A7R II and RX1R II, ‘come pretty close’.

It concludes that image quality is nearer to – and even better than – medium format cameras.

‘The first DSLR to hit 100 points – rather apt for Nikon’s hundredth anniversary year – puts the Nikon D850 in a class of its own for image quality. At base ISO, it’s unrivaled for color in the DSLR class, and its headline dynamic range score is outstanding, too. Against the competitor high-resolution options from Sony and Canon, the D850 offers either better or close to comparable image quality throughout the ISO range. So if you’re looking for the best image quality at low ISOs, at significantly less cost than a digital medium-format camera, the Nikon D850 looks like the camera you’ve been waiting for.’

Of course, DxOmark only tests the sensor and there’s more components that make a camera great. Nevertheless, the crew is impressed.

In a comparison which will be seen as odious to Canon fans, the top Canon camera in DxO’s ratings is the Canon EOS 5D Mark IV, with a score of 91 and a ranking of 17th. There are only two Canon cameras in DXO’s top 30.