The AIPP has handed over 6500 WWII veteran portraits to the Australian War Memorial (AWM), marking the completion of Reflections ‘Honouring Our WWII Veterans’, the biggest voluntary photography project ever undertaken in Australia which lasted for over two years. 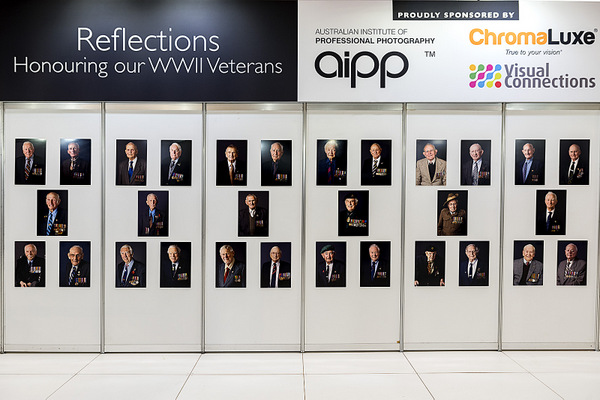 A handful of veterans’ portraits, printed on ChromaLuxe semi-gloss metallic substrate, on show at the PacPrint 2017 trade show in Melbourne. Photo: John Swainston.

The purpose of Reflections was to photograph the remaining Australian WWII veterans, and create a historic archive of the elderly men and women who fought for their country a lifetime ago.

Reflections is being heralded as a success by the AIPP, which had between 350 and 450 photographers volunteer their time to capture 6500 of the 7000 registered veterans’ portraits.

The AWM became the custodian of the Reflections collection on Victory in the Pacific (VP) Day, August 15, with a launch of the digital instalment held at the War Memorial. 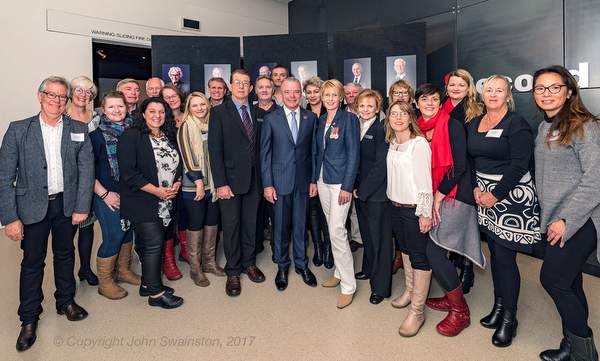 ‘The AIPP, as a group of professionals, has presented to the Australian War Memorial our gift to the nation: Reflections, a historic collection of veterans portraits. In my 35 years as a member this was my proudest day, and I’m sure that was equally felt by the members who travelled from around the country to attend and those who were there in spirit,’ said former AIPP president, Ross Eason. ‘In delivering this project we demonstrated to the community and government the true value of our profession, the importance of the photograph in recording our story and heritage, and a legacy that future generations will explore and discover at the AWM.

The project was, as expected, logistically challenging. Without persistence from the Institute, enthusiasm could have easily dwindled, and the project falter as a result.

Veterans, or their families, registered online for the project. AIPP members from major cities and regional hubs were co-ordinated to travel far and wide to find veterans, and either photographed them on-location or arranged a studio shoot.

Registrations closed on Remembrance Day, November 11 2015, but veterans kept ‘coming out of the woodwork’ to have their portrait taken.

The final product
The AWM has installed a permanent Reflections exhibition in the Second World War Gallery, projecting a continuous rolling slideshow of the portraits.

The photos will be available to the public, as part of the Memorial’s online collection. 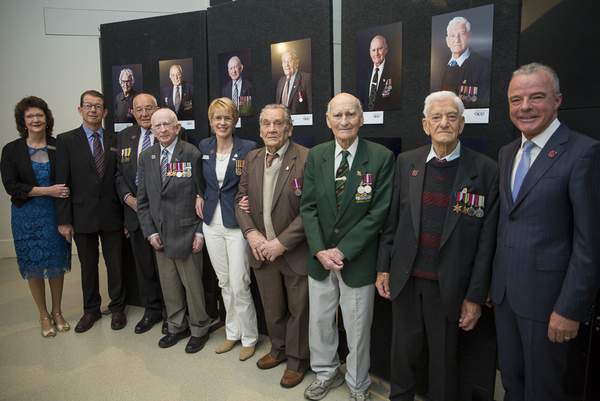 Veterans, standing in front of their portraits, at the AWM launch in Canberra, along with John and his wife (left), Louise, and Brendan (right). Photo: Geoff Comfort.

Wish Me Luck, an exhibition of 100 South Australian veterans’ portraits commissioned by Veterans SA, ran during the ANZAC Day Centenary last year. The exhibition, printed by Atkins Photo Lab and curated by Reflections national co-ordinator Louise Bagger, was hung at the State Library of South Australia and toured to the South Australian Riverland and Mt Gambier.

The AIPP also exhibited 200 metal prints over three days at the PacPrint 2017 trade show in Melbourne earlier this year.

ChromaLuxe, a manufacturer of dye-sublimation metal prints, donated and printed the photos on 12×18-inch semi-gloss metallic substrate at the trade show as part of their newly-forged partnership with the AIPP.

The ChromaLuxe exhibition will also be shown at the AIPP Australian Professional Photography Awards this weekend.

A photographer’s journey
Among the hundreds of photographers who volunteered their time, two AIPP members who worked most tirelessly for the duration of the project were Reflections project manager John de Rooy, and Louise Bagger.

John handled the back end administration – processing registrations, collating the data, and so on – while also photographing numerous veterans.

Louise initially volunteered as a South Australian photographer. The Adelaide Hills photographer previously served 15 years in the Royal Australian Navy, so she signed up with full commitment. Reflections was another way she could serve her country – but with her photography skills! 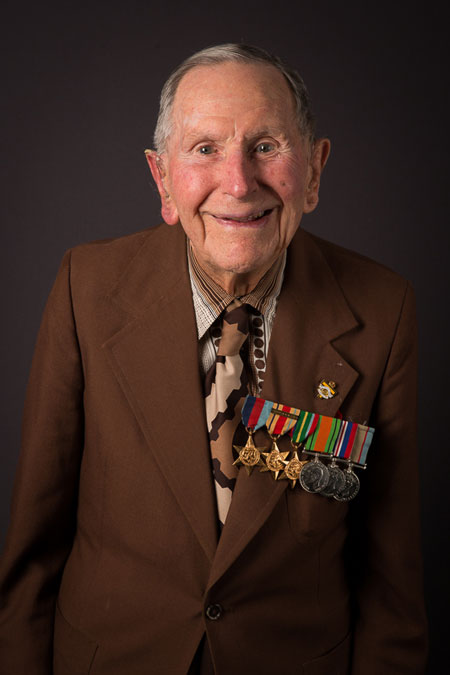 Clifford Brice was one of the Rats of Tobruk that fought at the Battle of El Alamein. He kept a journal for the entire battle on toilet paper. And we’re not talking about Kleenex toilet paper, but rough sandpaper-like paper. Louise saw the daily journal and photographed it. Photo: Louise Bagger

In 2015 Louise was ‘promoted’ to SA state co-ordinator, and under her leadership all 1050 portraits were captured by the end of the year. She knows how to crack a whip, which comes with her military background – ‘but I’m not a slave driver!’ she insists.

By March 2016 there was around 2300 veterans left unphotographed in the remaining states and time was running out. The plan to have Reflections complete by early 2016 was, in hindsight, an ambitious goal.

Louise was asked by the AIPP to co-ordinate Victoria, and even embarked on a five-day road trip to photograph 25 veterans, going as far as Deniliquin, NSW. She was driven and passionate about the project, so AIPP executive officer, Peter Myers, asked her to be national co-ordinator.

‘I reached about 205 veterans, and so many amazing stories came from it,’ she informed ProCounter. ‘A few times a family member told me a veteran had passed away, and said how wonderful it was to have the portrait shown at their funeral service. To have reached them before their time was up, and have their photo included in this collection – I can’t describe the feeling. Sometimes we only got in a few days before a veteran sadly passed away. We had a real urgency to get this project done before it was too late.’

Veterans were presented with a 5×7 print, courtesy of Kodak, and could purchase additional prints or a digital download. All profits went to RSL and Legacy.

AIPP treasurer, John Swainston, estimates that Reflections cost the AIPP more than $100,000, and over $3 million worth of ‘opportunity cost’ – time volunteered by photographers and sponsor contributions.

Not only did this put Reflections in front of a huge audience, but also promoted the AIPP and the profession of photography.

With Reflections now finished, the AIPP will continue communications with the AWM to explore how the collection may be used in the future.