Shaune Lakin, senior curator of photography at the National Gallery of Australia, has defended his controversial decision to award the $20,000 Olive Cotton Award for photographic portraiture to Justine Varga’s print of ‘spit and scribble’. 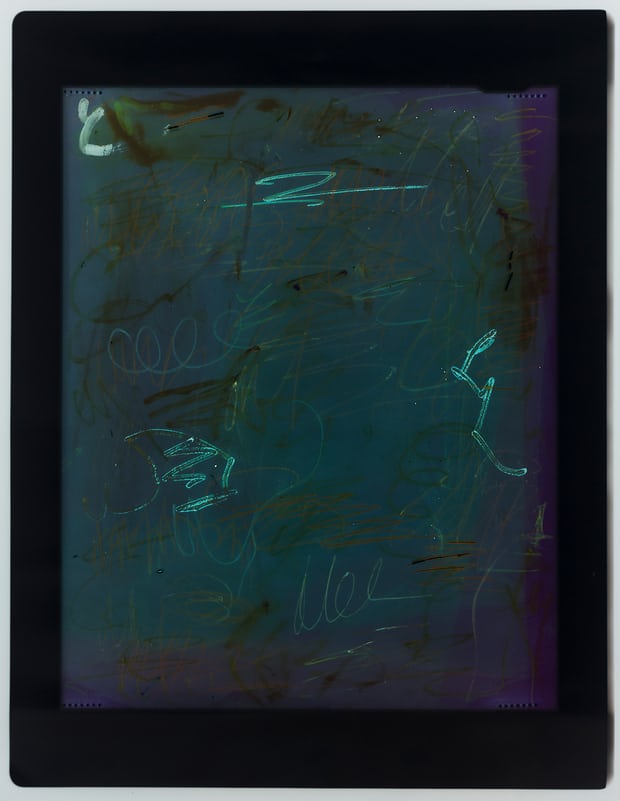 The winning image wasn’t made with a camera and doesn’t show an individual, leading to unprecedented global media attention for the Award from the Tweed Gallery, northern NSW.

Varga’s photo, Maternal Line, is a ‘portrait of her grandmother’. But without the artist statement this would be unknown.

‘One day, not so long ago, I came upon my maternal grandmother hunched over a table, vigorously testing a series of pens by scribbling with each of them in turn on a piece of paper. Captivated by this busy repetition of gestures, so reminiscent of her character, I asked her to continue her task, but on a piece of 4 x 5 inch negative film,’ Varga wrote in her submission. ‘Having left these traces of her hand on this light-sensitive surface, she also, at my request, rubbed some of her saliva on the film, doubling her bodily inscription there. I then processed the film and printed it at large scale.

‘A collaboration across generations, with her born in Hungary and me in Australia, the resulting image looks abstract but couldn’t be more realist; no perspectival artifice mediates her portrayal of herself or our genetic link, with both now manifested in the form of a photograph.’

Varga’s works – which have been acquired by the National Gallery of Australia, and the Art Gallery of NSW and SA – are primarily made using analog processes without a camera, and Maternal Line is no exception.

Varga told the Sydney Morning Herald that at the award ceremony on July 23, ‘I could feel it in the room that people weren’t happy about it.’

This was just the beginning. Many photographers have criticised the contest and asked whether the image deserved the considerable cash prize.

Oculi photographer and former Walkley Award winner Dean Sewell, who judged the Olive Cotton Award in 2009, told the Sydney Morning Herald the image was not a photograph as it wasn’t produced in camera, and it was ‘probably drawing a long bow’ to call it a portrait. He would ‘probably not’ have awarded it the top prize, but states this is all just ‘his opinion’. 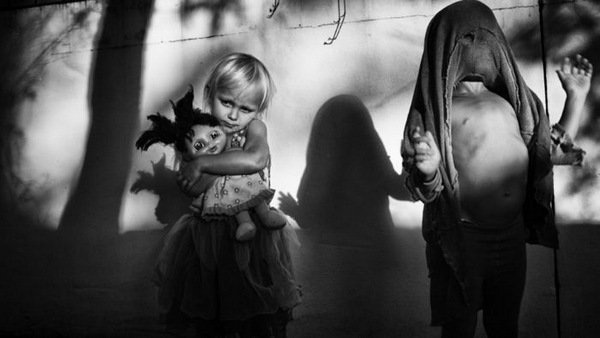 Commercial photographer, North Sullivan, wrote an opinion piece for photo magazine Capture questioning who owns the copyright to the image, as Varga’s grandmother created it by drawing and spitting.

He also asked whether Lakin, a member of the ‘celebrating (fine art) academic fraternity’, was qualified to make decisions on what is a photo and a portrait.

‘He is after all an academic who made his career posturing a theoretical perspective in a field (in which) he has made no physical contribution,’ he wrote, highlighting a ‘gulf’ between the broader photographic community and ‘those that see themselves as practitioners of fine art photo media – the intellectual elite’.

Respected fine art photographer and founder of the BIFB photo festival, Jeff Moorfoot, who is known for creating photograms – images produced without a camera – had this to say in a Facebook post.

‘As a photographer who has approached photographic prizes from all angles – as an entrant [mostly unsuccessful] a judge [both solo and as part of a panel] the instigator [also writer of T&C’s, the design of judging criteria and appointer of judges] of quite a few awards I have learned a few lessons along the way.

I know Shaune Lakin and I respect his integrity. I don’t know Justine Varga, but I do know her work and think some of it is quite beautiful, including the winning entry. I am most definitely not anti-conceptual art, nor am I against pictures made where there is no camera involved, in fact, most of my current body of work is made without a camera. But I always endeavour to make it appear photographic because I am a photographer. My bottom line on the subject of what was selected as the winner of the Olive Cotton Award was, is, and remains: the winner is ‘not a portrait!’ I would also proffer that, in my opinion, Justine Varga is not a photographer. She is an artist who has chosen photography as her medium. I might throw in here, that in my humble opinion, many commercial photographers are small business people and, photography happens to be the small business that they practice.

The things that I see as the mistakes the Olive Cotton Award made [as is my understanding of the process]: Having the same judge who selects the shortlist being the same judge who selects the winner. The prizes I have run have always had a separate panel who select the shortlist, and they do so independently and the entrants are always anonymous. The finalist panel or single judge have generally judged the works hanging on the wall, once again anonymously [in the case of a panel, sometimes with discussion] My preference has always to judge without artist statements. This may be because I am a photographer and not an academic. I have always understood, that even though works in a judging, to all intents and purposes, are anonymous until after the winner has been selected, any judge worthy of his or her credentials will know the work of some entrants, either by style or from previous exposure to an image. This is inevitable. So to all of you conspiracy theorists out there, pffffft!

The Prize is a memorial to a photographer who was not a fine artist, nor, some would say, a pusher of boundaries. If the Director of the Tweed Gallery deems the Olive Cotton Award is on the right path, then my suggestion would be that the terms and conditions of entry are amended to firmly and unambiguously state that it is a fine art award, and that concept, artist rationalisation, and the final work, are all to be evenly weighted in the judges deliberations. Personally, I think it’s a wise exercise to research previous editions of any photographic prize to get a feel for what sort of work got shortlisted last time. But ultimately, you pays your money and you takes your chances. At the end of the day, there is only one winner. The rest remain coodabeens. Me, I would consider it a personal victory to be shortlisted!

These have been the level-headed responses. Based on comment sections around the interwebs, where much more colourful and aggressive language can be found, the majority of photographers agree that the image is neither a photo or a portrait. 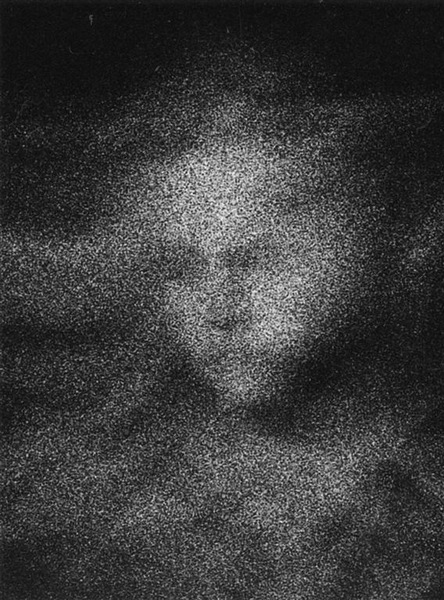 The 2013 winning photo, Candid portrait of a woman on a street corner 2013, by Trent Parke.

Lakin has reportedly received ‘dozens’ of hate e-mails, and said his decision has received a ‘disproportionate level of criticism’. In response he wrote an opinion piece for The Guardian.

This is why he chose Maternal Line: ‘It was a moving, melancholic experience: to witness a moment of significant emotional and cultural exchange between two women at such different points in their lives; to be left with a strong feeling for the subject’s personality and – to quote Olive Cotton’s daughter Sally McInerney – her soul. But I was also impressed by what I saw as the photograph’s feminist response to the proposition of a photographic portrait: this portrait was created between women, using elements [scribble, saliva] associated with maternal intimacy. In the end, Maternal Line called itself out as the award’s most ambitious portrait. ‘

Lakin argues that Maternal Line was not only ‘profoundly photographic’, but ‘the most photographic’ – as it was made with film and handprinted using darkroom processes.

‘it was handprinted chromogenically by sensitising photographic paper to wavelengths of light. At every turn, photographic processes and materials – including light – were used to bring this portrait to life.’

He said photography pioneer, Henry Fox Talbot, experimented with ‘photogenic drawings’ in the 1830s, which paved the way for avante-garde photographers such as Hungarian László Moholy-Nagy, who was ‘admired’ by Cotton and Max Dupain.

He then is so bold to assert that Olive Cotton would approve: ‘Maternal Line knowingly and conscientiously draws on this history of process-based [as opposed to picture-based] photography, a history which has always understood the darkroom as a place of practice, experimentation and innovation,’ Lakin wrote.

‘Cotton, the woman after whom this great prize is named, would have understood all of this. The often breathtaking character of her prints reflects not just technical command but countless hours of darkroom experimentation. To assert, as one e-mailer did, that “Olive is rolling in her grave” is to greatly undermine Cotton’s highly adventurous relationship to making and printing photographs.’

One thing Lakin wrote which is not up for debate, is that ‘people are looking at contemporary Australian photography’. What they are making of it might be another thing!

4 thoughts on “Spit and scribble divides art and photo world”