Life has turned a tad pear-shaped for John Rogers, the Little Rock, Akansas-based entrepreneur currently in possession of key components of the priceless Fairfax photo archive. 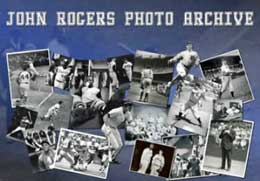 In June 2013, Roger’s Photo Archive (RPA) released a press release announcing it had finalised a partnership with Fairfax ‘to digitise and catalog all of the company’s news photo archives.’

‘Its photographic collections span more than 100 years of history, as covered by publications past and present, including The Sydney Morning Herald, The Sun-Herald, The Age, Sunday Star-Times, Auckland Star, and Dominion Post,’ the press release read. This must count as one of the single most valuable collections of photographs in Australia and New Zealand.

Rogers also convinced around 25 leading US capital city newspapers to hand over their photo archives. Unbelievably, it is reported that some newspapers’ archives were trucked off to Rogers without a written agreement in place.

According to the agreement with Fairfax, Rogers Photo Archive (RPA) was to pay $300,000 for up to 8 million original photographs and negatives from Fairfax publications. After they were scanned the ‘digital library’ was to be delivered to Fairfax, and RPA would assume ownership of the physical materials. Fairfax would own the digital copies. Only it hasn’t happened. Not yet anyway.

Fortunately, not everything is with Rogers. Two million negatives from The Age have been scanned and returned. Fairfax is negotiating to obtain the scans as part of a settlement agreement. The Age print collection never left Australia, according to Fairfax. Fairfax NZ’s print collection and the SMH print collection are in the US.

In a lawsuit filed in the Arkansas Circuit Court by Fairfax, the company alleges it terminated the agreement in September 2014 after it found a number of terms in the agreement had been broken. It found a handful of images it still technically owned floating around for sale on eBay.

Now there’s a warrant out for Rogers’ arrest on a $15 million bank fraud charge. An article in the Minneapolis Post estimates that claims against him amount to over US$50 million. He was previoulsy raided by the FBI.

But there seems to be a glimmer of hope for the Fairfax archive: A Little Rock court has agreed to a $150,000 loan for Rogers to to complete scanning work for Fairfax Media specifically. (Although how many of the millions of images can be scanned and digitally organised for $150K remains to be seen.)

While this appears to be a fraud of the first order, there’s not been a lot of coverage. Seems that newspapers don’t like to admit they have been conned. One exception is a reporter from the Salt Lake Tribune, who wrote: ‘Rogers not only failed to deliver digital archives, Web development and other services, in violation of signed contracts, the suit alleges, but also knew all along his business model was not viable. The couple’s actual intention, the newspapers assert, was to “personally plunder and deplete” the archives for their benefit.

A local image scanning expert ProCounter spoke to for our initial story corroborated the observation about the unviable business model.

‘I’ve seen this type of thing happen numerous times with digitisation,’ said Nick Kreisler, a Melbourne photographer who specialises in digitising historical archives. ‘People that run organisations think you can simply send off all your material and it will come back neatly packaged as high-res TIFFs or something. The reality is really different. Outsourcing large scale projects to be digitised rarely works.’

‘For somebody to go “let’s send Fairfax’s photo archives off to America”… You don’t know much about a company like that in America unless you do quite good diligence checking them out. They may be just paying minimum wage to some people to sit in a room, or even a garage, and just churn it out,’ Kreisler said.

Currently, no-one seems to know exactly where the images are or who will be employed to scan them.