Australian born photographer, Peter Lik, has claimed a world record by reportedly selling a single print for a whopping $7.8 million. 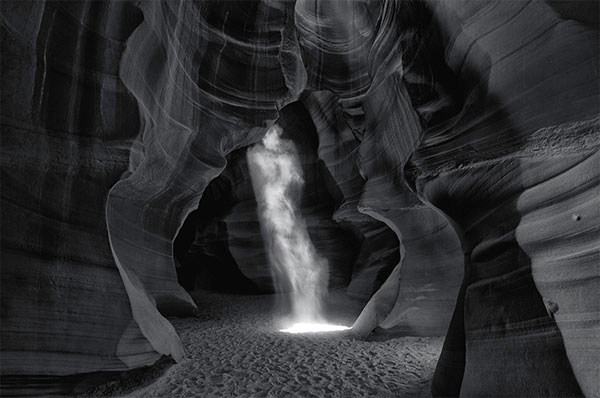 Peter Lik’s ‘Phantom’ was sold for an unprecedented $7.8 million and is the most expensive photograph in history. Source: Lik.com

The print of Lik’s ‘masterwork’, Phantom, is a monochrome image taken in Arizona’s Antelope Canyon, and depicts a ‘ghostlike figure’ appearing through a shaft of light.

Lik also reportedly sold two other prints to the same private collector who prefers not to be identified ‘for security and private reasons’ for a casual couple million.

‘The purpose of all my photos is to capture the power of nature and convey it in a way that inspires someone to feel passionate and connected to the image,’ Lik said. (And make a hell of a profit!)

Lik, who migrated to the US back in 1984, has been awarded the title of Master Photographer from the AIPP and the Professional Photographers of America.

There hasn’t been any independent verification, and the only proof of purchase comes from Lik’s PR department, which cites a buyer representative named Joshua Roth, who says his client ‘is a long-time collector of Lik’s work.’

But the Sydney Morning Herald’s Arts writer Andrew Taylor is sceptical, to put it lightly.

‘Lik’s work has been ignored by major public art galleries and dismissed by critics,’ he wrote. ‘When his photos have gone up for public auction, they have not sold well. Australia’s most famous photographer, Bill Henson, sells for nowhere near Lik’s astronomical prices.’

Taylor’s column (which comes off rather bitter) also quotes a couple of art dealers and consultants who questioned whether Lik sold a print back in 2012 for US$1 million, which was also claimed to be one of the most expensive photos ever sold. He also followed the article up by asking Roth for proof, who only gave his and a fellow attorney’s word that the sale is true.

But Lik does live in Las Vegas, where some manage to blow $7.8 million in a single night on the tables – so is it that hard to imagine a one off print selling for that much?