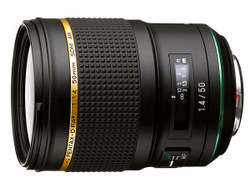 The weather-sealed fast 50mm prime lens is the first of Pentax’s new premium Star series for K-mount DSLR cameras, such as the K-1 and K-1 Mk II.

It has 15 elements in nine groups – one aspherical and three anomalous (super low) dispersion elements, to effectively compensate for chromatic aberration.

Pentax says the lens minimises distortion, even at a focusing distance of one metre, resulting in crisp images.

A new ring-type supersonic direct-drive motor (SDM) generates as much as 7.5 times the torque as the SDM installed in previous-generation lenses, and assures a smooth, high-speed focusing operation of the rear multi-element lens group.

Other features include:
– Nine-blade, round-shaped diaphragm produces a bokeh effect up to an f2.8 aperture setting;
– A minimum focusing distance of .4 meters, effective for capturing images with a bokeh effect;
– Electromagnetic diaphragm-control mechanism, for high-precision exposure control during movie recording;
– Weighs 910 grams.