Two former newborn photographers, Sandra and Brendon Moffatt, have generated over $1 million in sales from a ‘super left field’ product, the StandInBaby, a safety training mannequin for practising newborn posing. 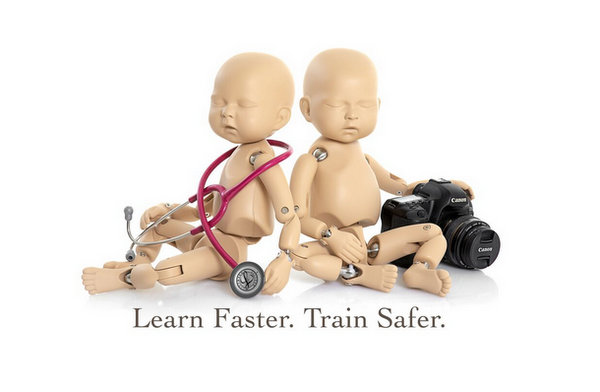 The couple’s invention is designed with ball joints that simulate movements that a newborn makes, and is weighted, sized and articulated to resemble a baby.

‘When we were designing it, we had a choice between looks and functionality,’ Sandra told ProCounter. ‘We went with functionality – it needed to move and pose in certain ways for it to be effective. Some silicon dolls look like a baby, but ours feels and moves like a baby. It features natural motion within the parameters of how a baby can move. It’s head can’t rotate 360 degrees, for instance.’

StandInBaby has been described by many as ‘creepy’ – most recently by celebrity investor Steve Baxter, on the TV show Shark Tank, where people pitch business ideas.

Sandra and Brendon appeared on Shark Tank, and received a $200,000 investment for a 20 percent of the business.

The Moffatt’s on Shark Tank.

It may pay off for the ‘sharks’, as newborn photography is a booming industry in Australia and around the world. As more photographers enter the field, there’s an increased safety risk due to inexperienced baby handling.

StandInBaby is a full-time business for Sandra and Brendon, who have shipped the products all over the world.

The biggest market is in America, followed by Europe and Australia. Customers have almost all been photographers, ranging from amateurs learning the ropes through to experts conducting workshops. However the life-like features has gained interest from the medical industry.

‘It doesn’t look like much, but it took a lot of effort to get right. We went through three different engineers to design it right. The first two said they couldn’t design it. It turned out more complicated than we initially thought.’

A common method to practice newborn photography – the way Sandra and most others learned – is by sourcing a living ‘model’.

The challenge is finding parents willing to model their newborn baby, the newborn time frame only lasts a few months, and babies need to sleep, eat, and can have medical conditions.

It was these challenges that led to the idea.

The Moffatts’ ran a busy family portrait photo studio in Ipswich, Queensland, with shoots banked up eight months in advance. After a staff member left in 2014, Sandra was swamped with work and didn’t have time to source a newborn model to train a new photographer.

She said it became overwhelming and broke her.

Brendon suggested they buy a fake baby to conduct training sessions, but Sandra couldn’t find a doll that could be properly posed – they were all too stiff and made from silicon. So they decided to make their own.

‘We never built or manufactured anything. So it was a big learning curve, but we went from Googling “how to invent something’” to being a company that ships globally,’ Sandra said.

The couple successfully raised over $230,000 in 2016 through a Kickstarter campaign, indicating there was significant demand for the product. Orders began pouring in, and the couple were forced to close the photo studio. 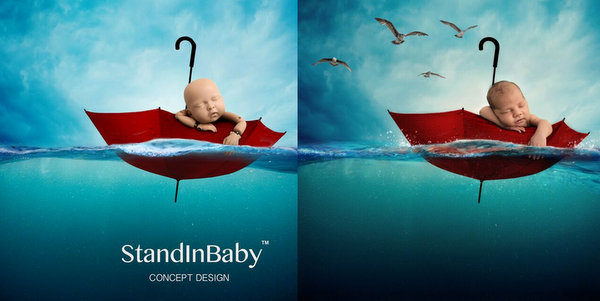 No babies, fake or real, were actually placed in an umbrella floating in a body of water for this shoot!

Newborn workplace safety serious business
The inanimate StandInBaby obviously lacks the ‘human element’ of practising  with a real live newborn, but Sandra says it’s the closest available practice aid to a real baby, and a safe way to learn.

StandInBaby is designed to be used alongside online or in-person guides to prevent any baby-related injuries.

There’s numerous ways an inexperienced photographer can cause a disastrous workplace accident.

‘Thing is, you’re practising on a real baby – someone’s child – and could cause harm to them. Especially if your attempting to self-teach by using other images as inspiration. You don’t know what was Photoshopped out, or used as a support underneath a blanket’.

Some health dangers are unknown by most newborn photographers, such as potential ‘positional asphyxiation’ due to the newborn’s underdeveloped airways being blocked when in a slouched position; or overheating due to unregulated temperatures in a studio, which puts the baby to sleep and makes it unable to communicate if uncomfortable.

But accidents are more commonplace than expected, Sandra says. They often end up in court, with the signing of a non-disclosure agreement which keeps it quiet.

Stories regularly float around the newborn photography community about unethical and dangerous businesses practices, due to the ignorance or inexperience of a photographer.

In the US, Sandra said there’s already been a handful of serious accidents reported this year.

For those unsure how to safely conduct a newborn photo shoot, StandInBaby provides a safe pathway to prepare for photographing a living newborn.