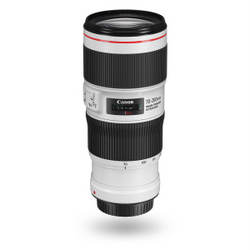 The f4 will ship at the end of June, and the f2.8 will arrive in early August

EF 70-200mm f4L IS II USM
The major improvement with this lens is five shutter speed stops of image stabilisation correction, up from three on the original. The stabilisation system includes three IS modes for shooting various situations – still subjects, panning, and fast moving objects.

The construction features 20 elements in 15 groups, with one fluorite and two UD lenses for improved image quality. It also has Canon’s fancy-sounding, super-duper Super Spectra Coating technology to help minimise ghosting and flaring, and fluorine coating on the front and rear elements to reduce smears and fingerprints.

The lens has a circular nine-blade aperture, and an ‘Ring Ultrasonic Motor’ inner focusing system.

Minimum focusing distance has been shortened from 1.2m to 1m.

EF 70-200mm f2.8L IS III USM
This lens is a totally mild upgrade from the predecessor – it’s primarily just new and improved coatings.

The major new talking point is the addition of ‘Air Sphere Coating’, to reduce flaring and ghosting, and the front and rear fluorine coating mentioned earlier.

The lens uses the same 23 lens elements in 19 groups, and 3.5 stop image stabilisation system as the superceded model.