The UK Intellectual Property Office, which has handled Orphan Works copyright exception licensing, reports its regulated approach has been a success. 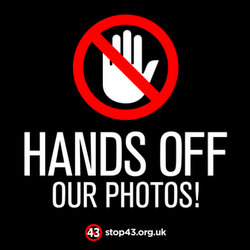 Stop43 was led by UK photographers to campaign against dramatic changes to copyright law.

Despite British photographers railing against Orphan Works in the lead up, the IPO hasn’t received a single official complaint since the copyright exception was introduced in 2014.

This is good news, given the Australian Federal Government may soon introduce a raft of amendments to the Copyright Act, including new exceptions like Orphan Works.

While the voice of Australian photographers has been primarily channeled through the AIPP, with the dedicated work of Chris Shain, the Brits campaigned much harder and louder. (see below)

There was genuine concern that Orphan Works would create a system that allows copyright material to be stolen. 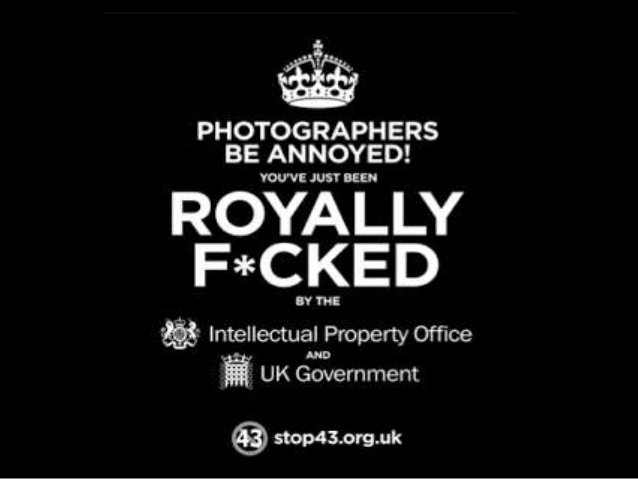 An activist graphic advocating against Orphan Works by the Stop43 group, consisting of reps from the Association of Photographers, The British Institute of Professional Photography, The British Press Photographers’ Association, Copyright Action, EPUK, The National Union of Journalists and Pro-Imaging.

ProCounter was recently informed by Chris, AIPP adviser for copyright matters, that the government is likely to push through Orphan Works, as it’s less controversial than other exceptions and will prove beneficial to cultural institutions.

For those who haven’t been reading ProCounter‘s detailed and running coverage of Orphan Works, here’s a quick refresher: an Orphan Work is any copyrighted material that’s been separated from its creator. Cultural institutions, like museums and universities, argue that they have a heap of Orphan Works in the archive that cannot be used due to potential copyright infringement. If the exception is introduced, a ‘diligent search’ would need to be undertaken to find the copyright holder before the work could be used. Copyright advocates are concerned that the law could be bent to bypass licensing content, and what constitutes ‘a diligent search’ will be a lawyers picnic. Photographers are particularly vulnerable given how easily image files can be detached from an owner. For instance, many social media sites strip metadata from digital image files as a matter of course.

There’s several ways the government could introduce Orphan Works, but Chris highlighted how the UK approach has minimised harm to creatives through a tightly regulated system.

The IPO handles licences, requiring a small fee to be paid along with the ‘diligent search’ process. The content is then loaded onto an online public register.

If the copyright owner finds their work, they can file a complaint to either have the application removed or claim the licence fee.

ProCounter asked IPO head of copyright operations, Margaret Haig, about whether photographers, or any creatives, have complained about the system since it was introduced.

‘We have received no formal complaints about the applications or licences granted for photographs; we have received notification of a possible right holder through the register and that application was later withdrawn; other applications have been withdrawn because the right holder for the photograph was located as part of the diligent search, but I do not have numerical data on this; and no rights holders have come forward for any licence granted to claim their fee, including for licences for the use of photography,’ she responded.

‘Our preparation for the orphan works licence scheme included working with stakeholders, including photography associations and individual photographers. A concern they had was that photographs on the internet would have metadata deliberately stripped and then someone try to claim it was an orphan work to be able to use it.  I think our diligent search requirements make that possibility very unlikely.  The diligent search guidance for still visual art and the sample diligent search for a photograph that we have created show that an applicant needs to be quite clear about how they have tried to locate the right holder,’ she explained.