An Australian phone accessory company has paid over $40,000 in damages for copyright infringement, after using a photo by US photography video bloggers, Tony and Chelsea Northrup, without permission. 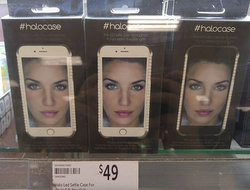 The original photo sent to the Northrups of the product.

The photography couple posted a lengthy 26-minute video to YouTube explaining how the saga, which started in early 2016 and lasted over a year, went down. As a service to readers, we watched the entire video and condensed the narrative into something more digestible.

Tony photographed Chelsea, his wife, for a book cover. The shoot was filmed and turned into a ‘ring light portrait’ video tutorial, and the high-res image was posted for pixel peepers.

The Australian phone accessory manufacturer used the image on its packaging for LED Halo Selfie phone cases, #halocase, which is sold at Target, JB Hi-Fi, and other large retailers. The cases have a form of ringlight built into the edges – kind of clever.

Fans from across Australian and New Zealand began asking the Northrups if they endorsed the case, as Chelsea’s portrait became the face of the brand. The couple were surprised to find the Australian company had used the photo on packaging and in promotional content.

Tony contacted – sorry, ‘reached out‘ to the company via e-mail, stating:

‘We were never contacted about nor compensated for the use of the image, a violation of the Copyright Act of 1968. The photo is not, nor has it ever been, for sale. As such, we seek the removal of our photo from your website, product, and advertising. We insist you remove the product from retailer shelves, and cancel any open orders. We also seek compensation and damages for the misuse of our intellectual property.’

Tony also asked for details regarding units manufactured, sold, the price, and provided a deadline to respond or the lawyers would come into it.

The Aussie company responded through a law firm, which blamed the image theft on a third-party graphic designer, who claimed to have licensed it from a stock website. The company said they would remove the image from all advertising material, and recall the products.

Tony wasn’t satisfied – the response didn’t answer his question regarding sales, compensation wasn’t addressed, and the situation was being handled poorly.

The photographer said he’d prefer a personal and cooperative response explaining the situation, rather than a cold legal letter.

But even worse, the products continued to be sold by retailers across Australia despite an assurance they had been recalled.

So the Northrups consulted a ‘middle-man legal service’, which specialises in finding attorneys for international cases for a cut of the winning fee. An Australian attorney was assigned the case and entered the legal arena for them.

During this period, the company again insisted that the product had been recalled. Yet Northrup fans from Australia and New Zealand continued to find the products for sale. They were being moved at a heavily discounted price.

Tony speculated the manufacturer didn’t want to sour relationships with distributors by having thousands of phone cases recalled from mass merchants. In total, the company manufactured 10,000 phone cases and sold almost 5000.

The case went to court, with proceedings dragging on for almost a year.

The Northrups weren’t happy with the result, with the case consuming time and being fairly stressful. It wasn’t worth the money, they said, but hoped the significant costs to the business would ward other copyright infringers from locking legal horns.

Settling out of court is a much cleaner, quicker way to reach a resolution, and often serves to benefit both parties.