With the Federal Government favouring introduction of an Orphan Works exception to copyright infringement, the AIPP has asked for the reform to be fair and tightly regulated. 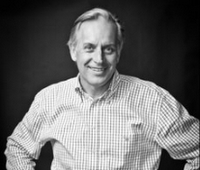 Chris Shain (right), AIPP adviser on copyright matters, explained to the Department of Communications and the Arts how photographers may be affected by an Orphan Works exception.

The federal government is in the final stages of its ‘copyright modernisation consultation’, and is also considering other ‘flexible exceptions’.

These exceptions are based on the recommendations in the Productivity Commission’s Intellectual Property Final Report, released in late 2016, and includes the controversial US-style Fair Use policy.

The proposed reforms were formulated way back in 2012, when the Australian Law Reform Commission (ALRC) launched the Copyright and the Digital Economy inquiry. The AIPP, with the help of Chris, has ensured the photo industry’s voice has been heard throughout the reform process.

Chris had a two-hour meeting with the department a fortnight ago in Canberra to advocate fair copyright reform.

‘The meeting was particularly about Orphan Works, but they’ve been having round table meeting for several potential reforms,’ he informed ProCounter. ‘I thought it was reasonably important for us (AIPP/photographers) to throw our oar into the river and share some ideas. It’s mostly lawyers and bureaucrats at these meetings, so they often don’t get real creators in there.’

Based on discussions with copyright advocacy and interest groups, Chris said the government is likely to push through the less controversial reform. Policy that isn’t as polarising as, say, Fair Use.

What is Orphan Works?
The copyright exception applies to works that are separated – ‘orphaned’ – from their original author. If a ‘diligent search’ fails to find the owner of the copyrighted material, it can be licensed as an Orphan Work.

Orphan Works beneficiaries – the most vocal supporters – are cultural institutions like libraries, universities and museums which possess archives of historical material. But the big online content aggregators clearly have an interest in the matter as well.

It’s argued that important archived work is going to waste, as the copyright lifespan remains active, but the author and their family is unknown.

Institutions don’t want to risk copyright infringement, but Orphan Works would allow them to digitise, display, and distribute the material.

But Orphan Works could work against photographers – digital image files can easily become orphans. Strip the metadata from a photo and combine unpredictable technological change, and in a decade thousands of image files may become Orphan Works. Chris said this is a point he highlighted during the meeting.

‘There are aspects which are perfectly reasonable with Orphan Works. It’s just a matter of limiting the damage,’ Chris said. ‘We need to have some control over commercial exploitation of Orphan Works. That’s where the trouble starts for photographers. Non-commercial stuff, like galleries and archive collections, that’s understandable and a reasonable position.’

Related: How easily an image become an orphan

The UK system
The UK introduced Orphan Works in October 2014, with the government’s Intellectual Property Office (IPO) granting licences through an online register.

Applicants provide information regarding a photo, complete a diligent search checklist, outline the desired use, and pay a fee. The information then becomes available to the public, and either granted or denied a licence.

If an author finds their work has landed on the register, they can either stop the application or claim the licence fee. 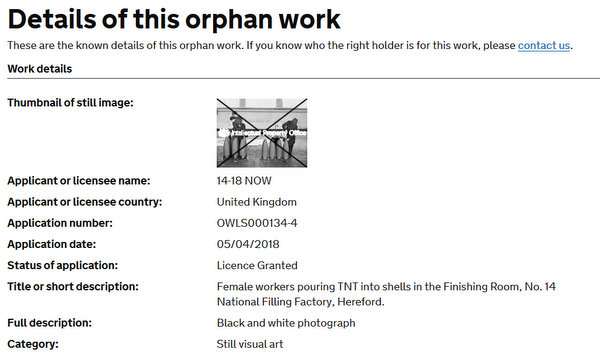 The IPO Orphan Works register: This historical photo shows women pouring TNT into shells. The photo came from the UK Imperial War Museum archive, and the applicant is 14-18 NOW, an arts organisation that brings WWI stories to life. Source: Screenshot/IPO.

Chris said that in the lead-up to the UK introducing Orphan Works, British creators were concerned the policy would harm their business. Almost four years later, Orphan Works hasn’t proved to be an issue.

The IPO recognises a diligent search varies depending on the image.

Regardless, it’s a complicated process, which costs time and money – not exactly a lazy trickster’s way to bypass licensing an image.

‘When you look at the reality of Orphan Works in the UK, it’s not a problem at all. Through the IPO they regulate and track Orphan Works. Interestingly, there hasn’t been much stuff put up there. The Productivity Commission said there’s this “massive problem with libraries unable use material”. The UK experience says it’s not a big problem at all.’

Since the register was established in late 2014, there have been 584 visual art applications – photos, illustrations, sketches, design, fine art. The service is being used, but not abused. (In total, only 801applications!)

The photos are primarily historical, with a large number taken during the World Wars. Applicants are mostly cultural institutes, with a handful of individuals and companies in there.

Scrolling though the images, ProCounter found only a small number of contemporary photos.

One example is a school portrait taken in the early ’90s of British actress Felicity Jones, to be used in a feature film produced by Columbia Pictures Industries.

Another is a portrait of deceased Brazilian F1 racer, Ayrton Senna, published in Autosport magazine in the the ’90s. The applicant, a Welsh-language broadcast company, contacted the magazine which had no database records of the photo or creator.

There’s another – a stock graphic ‘photograph’ of a fast travelling bullet with a swirling trail behind it. The applicant is soft drink manufacturer, Beau Drinks, which intends to use the image on product packaging.