NSW conservative MP, Philip Donato, has been criticised by the NSW deputy premier, John Barilaro, for publishing an out-of-context photo of a cow being executed to push a political message. 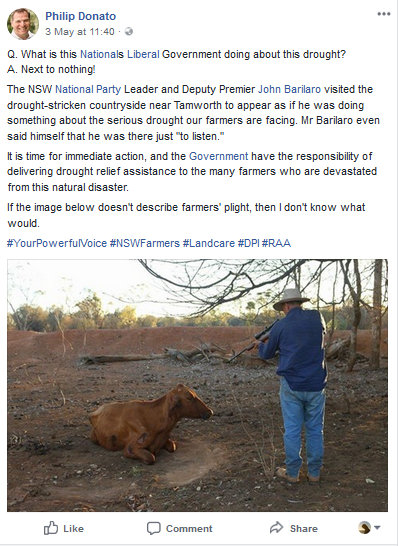 Donato, a member for Orange from the Shooters, Fishers, and Farmers Party, posted the image to Facebook. He didn’t ask permission from Queenslander, Honor Moore, who captured the photo of her father shooting the cow.

However Donato used the photo to take a stab at Barilaro and the NSW government, and highlight the effects of drought in western NSW.

‘It is time for immediate action, and the Government have the responsibility of delivering drought relief assistance to the many farmers who are devastated from this natural disaster,’ Donato wrote. ‘If the image below doesn’t describe farmers’ plight, then I don’t know what would.’

When questioned about using the photo without permission, the politician argued it has ‘been circulating on Facebook, it has about 7500 shares. Look, once it is on Facebook it’s open to people to like, to share and to copy it.’

While the use is potentially copyright infringement, Moore is also unhappy her personal photo has been used out of context. But Donato is refusing to take the image down.

‘Mr Donato has clearly used this highly inflammatory and emotive image out of context, in an attempt to generate an emotional response from his audience, and in turn score cheap political points,’ he said. ‘This image wasn’t even taken in NSW. This image is more than four years old. Yet he’s tried to convince his audience the [image] reflects the “plight” of NSW farmers.’

In response, Donato said Barilaro is simply avoiding the issue.

‘I keep hearing that farmers are frustrated with the lacklustre loans on offer as drought relief,’ the rural politican said to AAP. ‘Mr Barilaro needs to spend less time worrying about Facebook and more time focusing on how to help farmers struggling with the drought.’

Perhaps the most alarming thing about the exchange is that a NSW MP should be so clueless about copyright law and the imperative to respect intellectual property.