If you’ve been in the market for a new computer recently, you might have noticed the increasing number – especially at the high performance end – equipped with internal SSD (solid state drives) rather than HDDs (hard disk drives) for data storage. 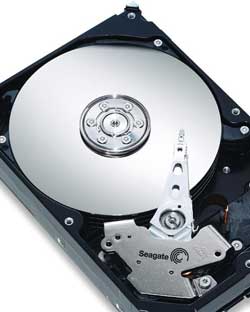 A hard disc drive consists of a series of platters spinning at 7200rpm. It’s a mature technology which is currently being replaced by faster, more durable SSDs.

So for instance all current MacBook Pros come with SSDs rather than HDDs.

SSDs are faster at reading and writing files than hard drives, and with no moving parts they are less prone to failure, are more durable overall, use less power, and are more compact. By comparison hard disk ‘platters’ spin at 7200rpm, with clearances of a millimetre of two.

An internal HDD will deliver transfer speeds of around 80-160 MB/s. An SSD will deliver over 500 MB/s – and be premium models over 3000 MB/s in ‘sequential write times’ if the spec sheets are to be believed. If you have adequate RAM and a high-performance computer chip, replacing your HDD with an SSD is probably the next logical step to increasing your system’s speed. You will first need to ensure that the your laptop or desktop computer is both compatible with and able to take advantage of the new drive.


Now with the high speed USB-3.1 (Gen 2) standard being rolled out as a genuinely universal port, and compatible with both new Mac and Windows computers, external SSDs can also perform at much higher transfer speeds, less restricted by the USB cable ‘pipeline’.

The issue has been the relatively high cost of SSDs, especially with HDDs falling in price at the same time. (A 1 TB HDD can now be purchased for under $100.)

While SSDs are still considerably more expensive than HDDs, their prices have been dropping over the past 12 months or so to the point that a professional photographer wanting the fastest, most reliable storage technology should be considering paying the SSD premium. SSDs are the future of storage for data-hungry applications – and that definitely includes photographers!

The last few months have seen big advances in both NVMe (internal) SSDs and external SSDs. 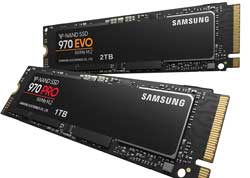 They feature a five-year warranty, or up to 1200 terabytes written – 50 percent higher than those provided for the previous generation. The Dynamic Thermal Guard technology safeguards against overheating by automatically monitoring and maintaining optimal operating temperatures, while a heat spreader and new nickel-coated controller further lower the SSD temperatures.

Western Digital Corporation has the WD Black 3D NVMe SSD, which competes directly with the Samsung SSDs at the high performance end of the market.

With sequential reads speed which match the 970s, and capacities up to 1TB, a five year warranty and up to 600TB write endurance, the drives are available from this month. Local pricing we found was $189 for 250GB and $259 for 500GB.

These are at the high end of internal SSDs and there is now a broad choice available at lower prices – but if you are upgrading an existing external hard disk, make sure your computer is able to take advantage of the extra speed. 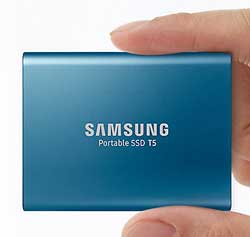 The Samsung T5 delivers transfer speeds of up to 540 MB/s – around five times faster than an external HDD.

Samsung is also a leader in external, portable SSDs, and here its star is the Samsung T5, released in the second half of 2017.

Samsung claims it is five times faster than an external HDD, which will be at its limits at or around 100MB/s. The T5 can reach 540MB/s due to its USB 3.1 (Gen 2) connectivity (see below). It has a shock-resistant internal frame to protect against drops and knocks, and weighs just 51 grams.

Security is via AES 256-bit security software, and the T5 can be password locked. SSDs have low power requirements, which should be a real boon to photographers out in the field. (Or watching a movie on your smartphone!)

We read a review of the T5 which said it was great – the best in the market – but the earlier generation T3 was a better buy, and almost as fast at 440MB/s.

SanDisk is also a player in the external SSD market, with the SanDisk Extreme Portable SSD available in 250GB, 500GB and 1TB capacities and with fast USB Type-C connectivity. It has transfer speeds up to 440MB/s and is small, water and dust resistant to the IP55 standard, and shock proof at drops of 2 metres.

Then we also have USB Type A, B and C. The numbers refer to the various generations of USB technology and the performance. The  letters refer to the shapes and sizes of the USB plugs and ports.

A USB Type A plug and a USB Type C plug.

The rectangular USB port we are most familiar with is called USB Type-A. The blocky, almost square port used in many large peripherals like printers is USB Type-B. Then there are various miniaturised versions of these – such as USB connectors to smartphones –  adding a little more complexity.

Type C plugs look something like the micro-USB plugs found on smartphone chargers, but they are reversible – there is no top or bottom side. Type C ports don’t necessary mean that the connection is USB 3.1 Gen 2 – they have been around since USB 2.0. But USB 3.1 (Gen 2) with the USB Type C shape is slowly becoming the new universal standard, and over time it’s hoped it will replace the current plethora of alternatives, such as HDMI and the various Apple options.

USB 3.1 is backwards-compatible with older versions of USB, so you just need a physical adapter with a USB-C connector on one end and a larger, older-style USB port on the other end. You can then plug your older devices directly into a USB Type-C port.

Targeted marketing ‘is everything’

Bernie Griffiths is certain the service he offers to wedding, portrait and family photographers is unique, with no one else in the world doing it quite like he does. Bernie (pictured right) operates a photography coaching business with an emphasis … Continue reading →