The Australian Institute of Professional Photography (AIPP) is encouraging all eligible accredited members to elect the new National Board, which will be tasked with taking the Institute into its next chapter. Voting closes tomorrow, March 30, with the new Board announced April 3. 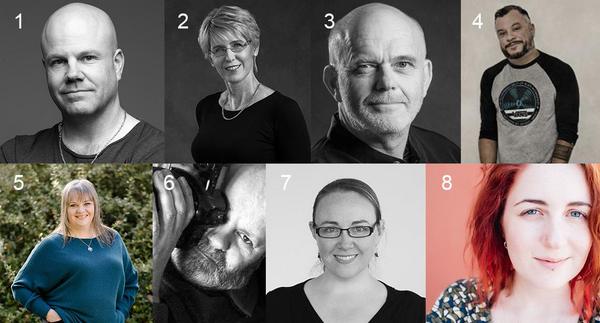 Six of the eight nominees will form the new AIPP National Board and take the reins from the interim Caretaker Board, which has overseen the Institute during its transition period.

The candidates are Craig Wetjen, Louise Bagger, David Simmons, Steve Wise, Melissa Neumann, Malcolm Mathieson, Sara McKenna, and Melinda Comerford. (More info on each nominee can be found at the bottom of the article)

The National Office officially shut this week, marking the first time the AIPP has existed without an established office in nine years.

Caretaker Board member, John Swainston, informed ProCounter they have been working tirelessly to transition the handling of administration roles, such as the complex IT systems, which were previously operated by National Office.

While the interim Board has readied the AIPP for a smooth handover, the new Board’s first six to eight weeks will require tough decision-making.

He says it will be a challenging road ahead, however a group of around 12 members have offer their various skills to help with the handover, and there’s goodwill among majority of the 3000 members.

Background
While inner tension had been brewing within the AIPP for years, a series of events at the beginning of the year caused a large faction of frustrated members to withdraw their membership and stop payments.

This resulted in a potentially disastrous financial situation that would cripple the Institute.

The AIPP National Board resigned, and resolved to close the National Office to cut administration costs.

A Caretaker Board, consisting of John, Louise Bagger, Melinda Comerford and Nick Ghionis, remained in place to prepare the Institute for the future. They have voluntarily kept members informed of the various challenges ahead as the National Office is dismantled. 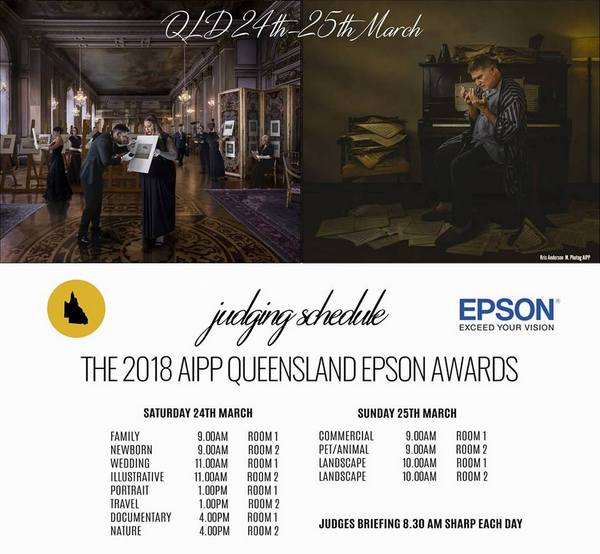 ‘We had less entries than usual, but that’s to be understood. Although if you hadn’t been aware of the turmoil that happened within the AIPP, you wouldn’t have guessed it by how we ran the event. Everything went really smoothly and it was all positive. We’re still coming off that high – we did it.’

Mel said on the morning of the AIPP announcing its structural change, the Queensland Council was coincidentally exploring how to form a team and run the awards.

‘We banded together and it was a team effort. We had a number of council members leave last year, so there was a smaller council than usual. However, after the announcement arrived, nothing really changed with what we had planned,’ she explained. ‘We were always going to go ahead with the awards – if anything this is what we need to bring people together. There was no question or doubts about running the awards.’

Despite uncertainty if the online live stream would go ahead, a new open source system was adapted and operated without a single technical glitch by Adam Hourigan and Stef Dunn. This allowed members who could not attend, including regional Queensland and interstate members, to tune in.

The Queensland Awards is the first AIPP event in recent times to proceed with minimal assistance from head office.

Epson is, no doubt, paying close attention to determine whether it will continue supporting the event.

A survey was conducted to find out roughly how many members planned on entering the awards. This was to manage costs, in terms of the venue size and catering.

‘Members who may have initially hesitated to support us actually realised they needed to enter and support us to make this continue. Up in Queensland we’re not shy to ask members these questions, and receive an answer. We’re not afraid to go it alone and act as a bit of a litmus test state for everyone!’

It’s likely the ‘new AIPP’ will operate with greater involvement from State Councils, a tighter budget and more volunteers – a throwback to the Institute in past years. Mel said the Awards operated with this approach, and she’s confident the cost cutting measures will return a satisfactory financial result.

Mel says the Queensland Council is currently working on a series of free or low-cost events to keep members engaged.

But each State Council will have a better idea of the path ahead once the National Board resumes its role.

The New National Board
The six new Board members will be the people who make the decisions that drive the AIPP into the future. They will also be able to co-opt new board members, and John has indicated he’s willing to remain with a position at the AIPP.

It’s fair to say that, given the criticism levied at the previous Board, the current nominees have guts.

So who are they? Below are the current nominees, along with their statements in image form. ProCounter doesn’t have access to the text, and apolgises for the clunky presentation and if some text if difficult to read due to image compression) 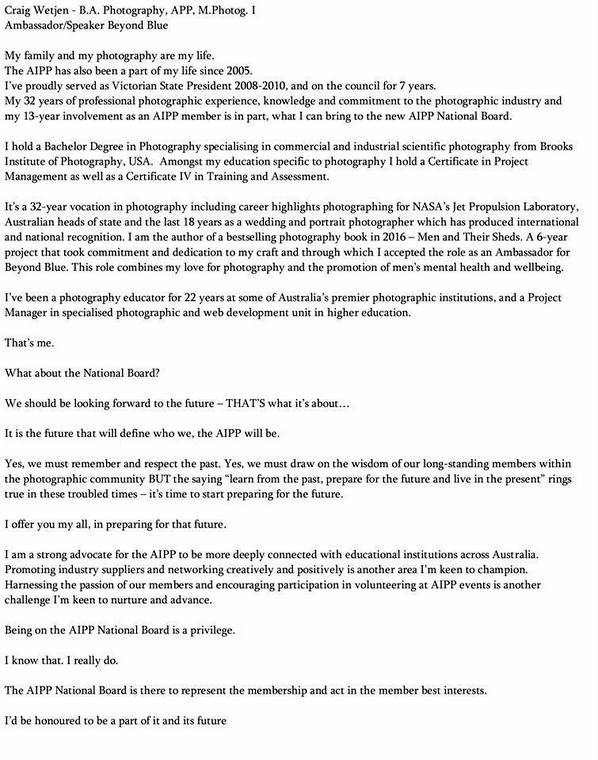 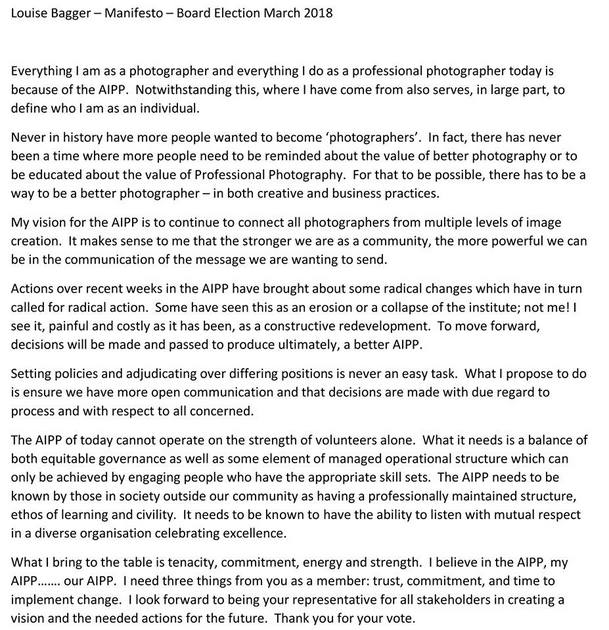 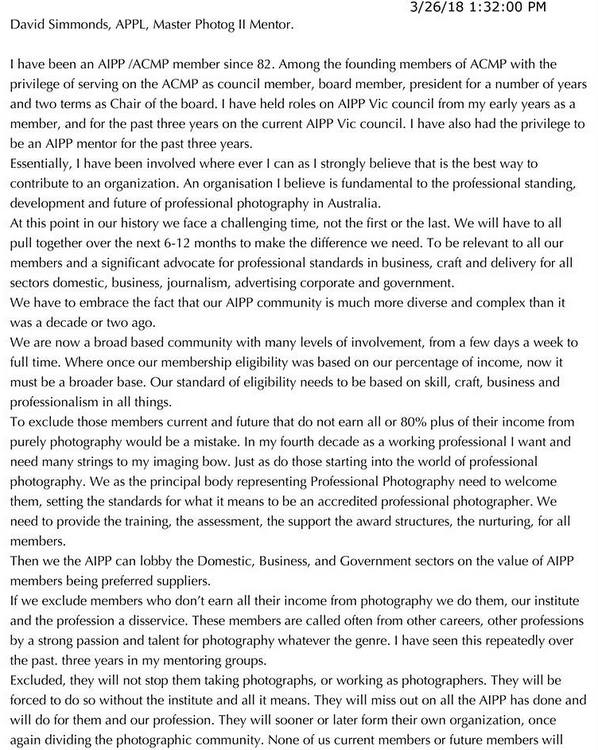 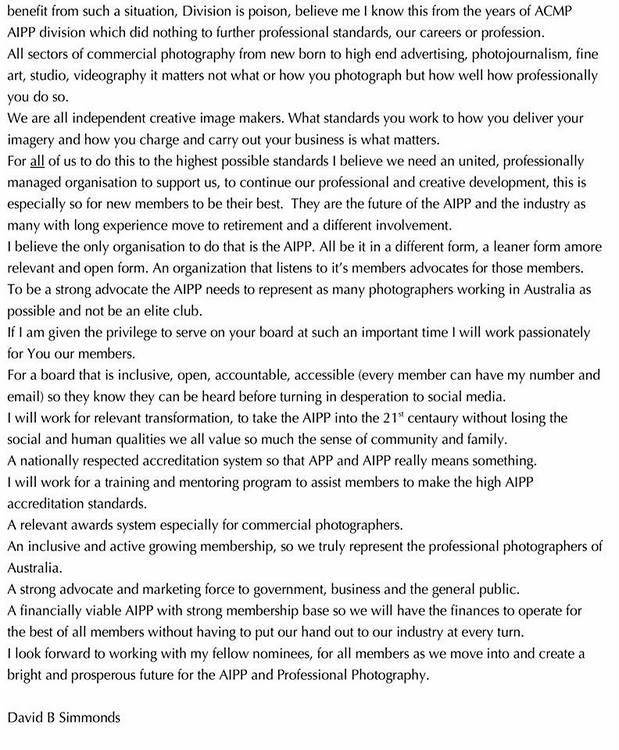 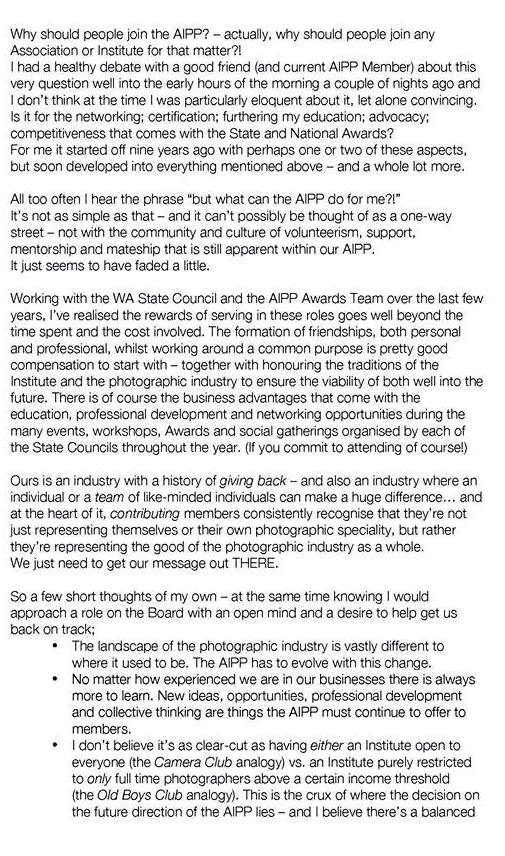 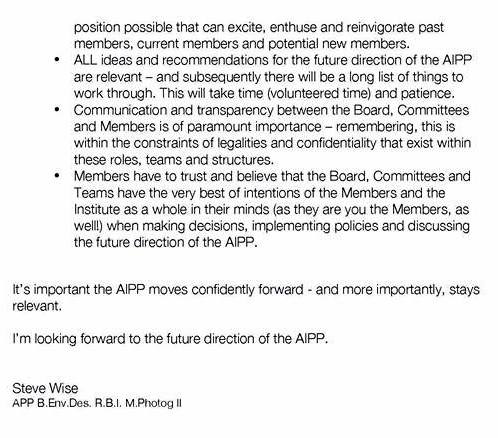 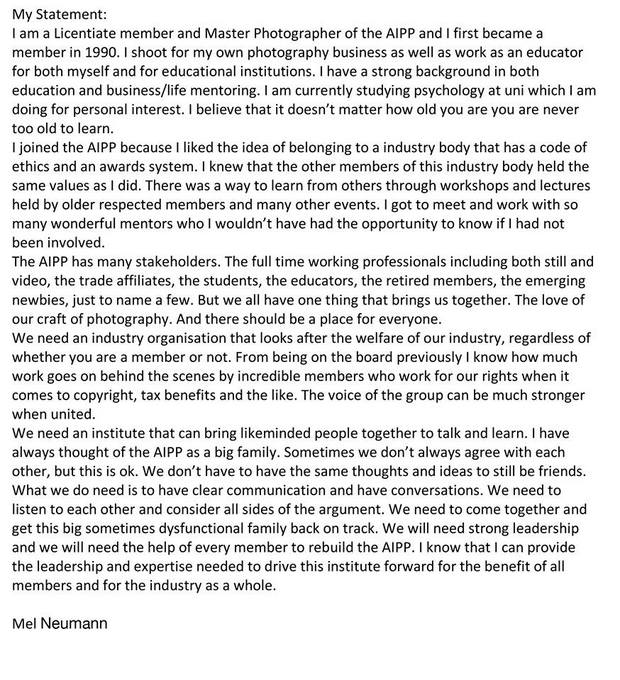 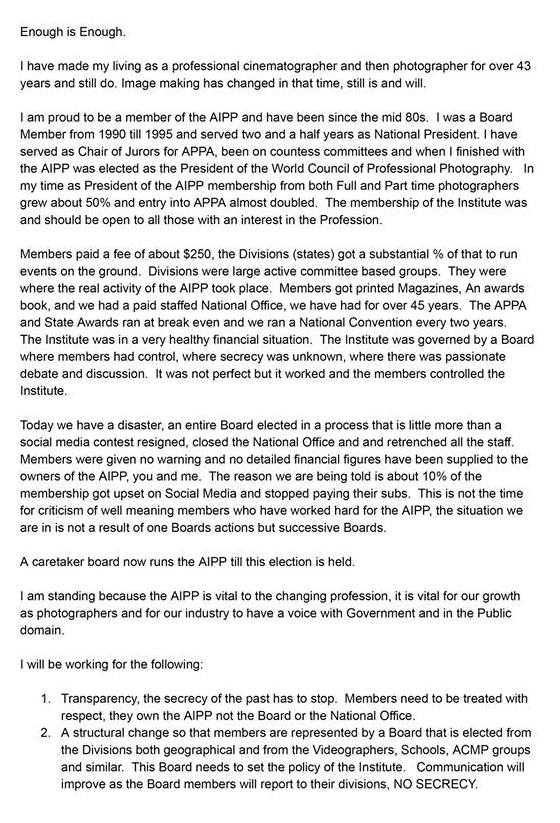 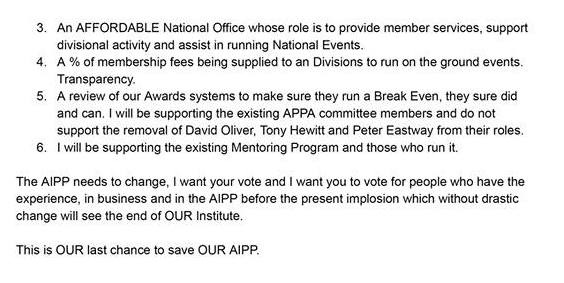 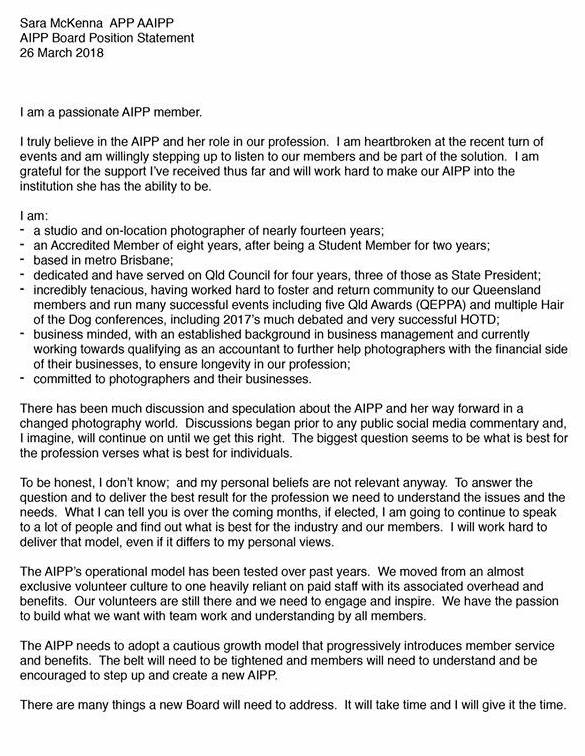 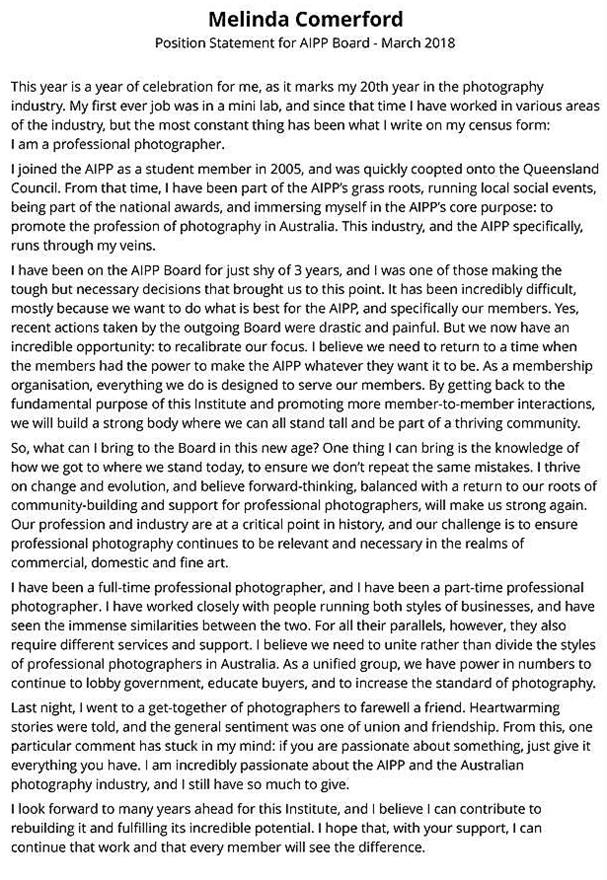 Support ProCounter by subscribing to our free fortnightly e-mail newsletter!

One thought on “The AIPP’s challenging road ahead”