Rumours that Fujifilm’s upcoming pro-oriented X-H1 mirrorless camera will be announced this week have been accompanied by leaked pictures and a press release. 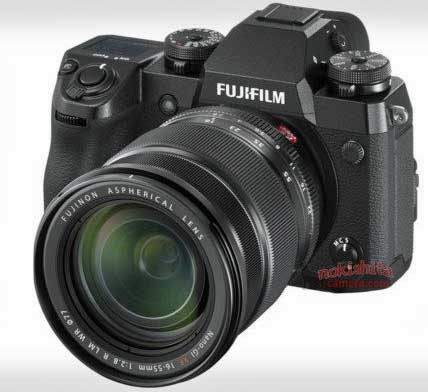 The Fujifilm X-H1 – from the Nokeshita camera rumours blog.

This will be Fujifilm’s third camera release for the year, following two more consumer-oriented cameras which have already been announced overseas – the waterproof XP130 and the entry-level X-A5 mirrorless.

The X-H1 is the first model in the popular X series with in-body image stabilisation. (IBIS) and also offers genuine 4K video (at 30fps, rather than the Mickey Mouse 15fps for five minutes the new X-A5 is capable of.)

…UPDATE Mk II: Unfortunately, the ‘guesstimated’ price above is way off the mark. Fujifilm Australia has opted to bundle the X-H1 with an accessory vertical grip, boosting the local RRP to $3399 (US price for the bundle is $2199). This represents an ‘Australia tax’ of around $250.  That’s a big premium on the US body only price, which may create some challenges for local retailers, especially if local prospects don’t really want to buy a vertical grip.