William Heimerman was the long-term director of the Photographers’ Gallery and Workshop in South Yarra, where museum quality exhibitions were held from the mid 1970s. 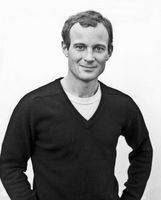 They set out on a journey to exhibit Australian and international photographic work of the highest quality. After a few years of co-directorship, from 1977 until 2015 William was the sole director, energetically seeking out the finest work from Australia, the USA, and Europe.

Many more artists exhibited work in group and student exhibitions.

Tony Perry in 1980 wrote about the gallery: ‘Today the Photographers’ Gallery is run solely by Bill Heimerman…with an enviable record of exhibitions and workshops is seen as the premier gallery in Australia; a show there is a genuine honour’.

In 1974 William accepted a teaching position with the Victorian Education Department and taught English at Coburg Technical School. It was here that he met Ian Lobb and the late Carol Jerrems, both avid photographers, who initiated his interest in and appreciation of photography. William subsequently moved to Brighton Technical College where he and other staff members established a photography program. Later William taught photography at Melbourne College of Advanced Education and Council of Adult Education, inculcating students in the techniques of fine printing and the zone system.

William was himself an accomplished photographer, producing work in abstract, portrait and landscape veins. His work is art of great poetry that will be exhibited in a posthumous exhibition that is in preparation.

William passed away on October 1 at Hammond Care in Caulfield after a relatively short period of declining health. William was a brother to Patricia, Jeff, Kevin, Jane, Ted and Robert (dec), brother in law to John, Sarah, Diane, John, Paula, and Susan. Many nieces and nephews, extended relatives and friends, survive him. He will be greatly missed by lifelong friend Barbara Derrick, and the many artists and art collectors that he befriended.