Online exposure of natural landmarks has become a destructive force, as unprecedented foot traffic leads to deterioration of fragile and pristine environments. 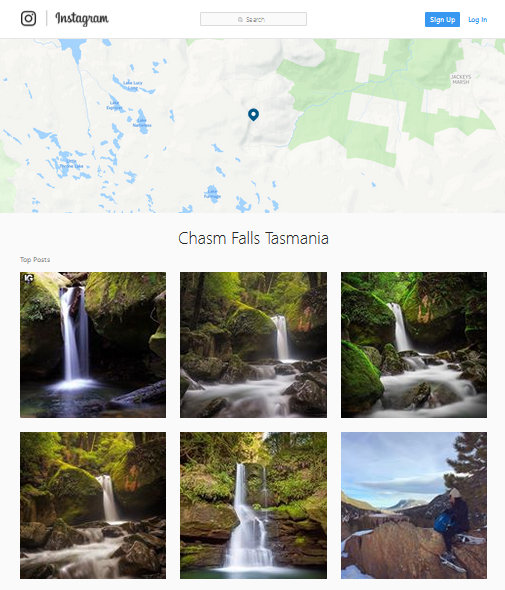 Chasm Falls, located near Launceston, Tasmania, is suffering from unprecedented levels of foot traffic (and long-exposure photography), due to social media exposure from photographers such as Jason Futrill.

That’s according to Tasmanian Instagram landscape photographer, Jason Futrill (@Tassiegrammer), who says he’s beginning to notice the toll his photos have taken on lesser-known locations.

In a blog post, he warned nature photographers to consider the consequences of publishing locations of remote or secret landmarks.

The Insta-cycle
Instagram is a driving force behind the destruction.

Photos are geotagged or hashtagged to maximise the post’s audience. This reveals the location and, naturally, if the image pops, ‘trophy hunters’ will visit to capture a similar shot.

Instagram photographers chase likes, comments and followers. Maximimum exposure is gained when a tourism board, or organisation with a large social media following, shares the image which directs a new audience to the photographer.

For the photographer, it induces warm and fuzzy feelings – maybe even an ego-inspired dopamine hit – and confirms that they captured a cracking shot. For the tourism board, it’s cheap user-generated marketing that promotes the destination.

Before Instagram, landscape photographers had most photos printed in magazines and brochures, which have a limited audience compared to social media.

‘Take nothing but pictures, leave nothing but footprints, kill nothing but time’
Jason feels partly responsible for the degradation of some once unsaturated Tasmanian landmarks.

After revisiting Chasm Falls, a location he exposed to the masses, the photographer noticed signs of deterioration – moss and foliage had worn away from foot traffic, paths have been cut back, and rubbish litters the area.

‘While I am extremely happy I have some amazing images from there, I am also quite upset at myself for not thinking about the consequences when I did rush to share this amazing place with such a big audience. I have no right to tell people not to visit these places. But sadly the “trophy hunting” that I myself have been guilty of as a photographer has caused such a beautiful place to deteriorate substantially’.

Jason adds that some locations he’s exposed are remote and dangerous to visit.

It’s ultimately low impact damage being dished out to the environment. Most people are leaving nothing but foot prints.

Section E of the guide is dedicated to Social Media Culture, and suggests a photographer posts photos with a nature conservation message in the caption. It also asks photographers limit the amount of photos they share of sensitive locations, and be careful when disclosing the location of wildlife.

Developing the environment
If high levels of foot traffic to a location are sustained over a period of time, local authorities may upgrade access and facilities, lading to tour groups visiting the area, and businesses setting up shop nearby.

Photographers like Jason believe the biggest cost is to the natural environment, which thrived prior to sustained human impact.

‘This increase in tourism numbers also requires investments into sustainable facilities in the most popular locations, and that in itself is ruining many places,’ Jason writes. ‘Locations where there were previously no pathways, accommodation facilities, cafes, roads or any other permanent facilities now require it for safety reasons, and just simply to provide access to those seeking to experience these places.

‘We are causing our natural landscape to deteriorate. We are in effect helping to damage the landscapes we so desire for our beautiful imagery just purely through the act of sharing our photos far and wide.’

In northern Arizona, a section of the Colorado River – Horseshoe Bend, a few kilometres upstream from the Grand Canyon – has become ‘Insta-famous’. 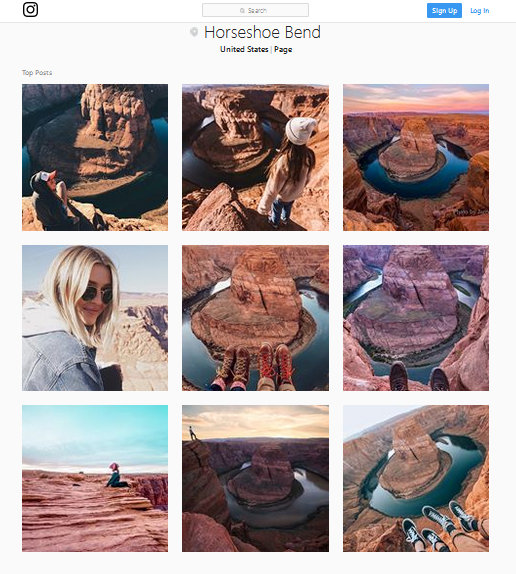 Photo tip: Top Instagram posts from Horseshoe Bend indicate that photos with legs dangling over the edge is currently on trend.

The picturesque bending canyon only had 1000 visits per year five years ago, but now has over 4000 visitors a day!

Construction has begun on a new parking lot and amenities block, along with a viewing area equipped with railing and safety signs, reports NY lifestyle publication The Outline, in an article titled ‘Instagram is loving nature to death‘.

The article states that as of November 2017, Horseshoe Bend has 226,000 posts, while the encompassing Glen Canyon National Recreation has only 26,000. Instagram has driven the crowd leading to the development.

The writer says the location’s new fame will transform it from an off-the-beaten-track natural wonder that’s untethered from civilisation, to an over-crowded pit-stop catering to the masses.

There’s also an uglier side to a landmark’s fame. A tiny portion of visitors may vandalise, litter, graffiti, or put themselves in danger for an epic selfie or stunt.

In Queenstown, New Zealand, there is a famous lone-standing willow tree at Lake Wanaka, AKA #thatwanakatree (19,000+ Instagram posts) thst has been damaged by tourists posing on it for selfies. 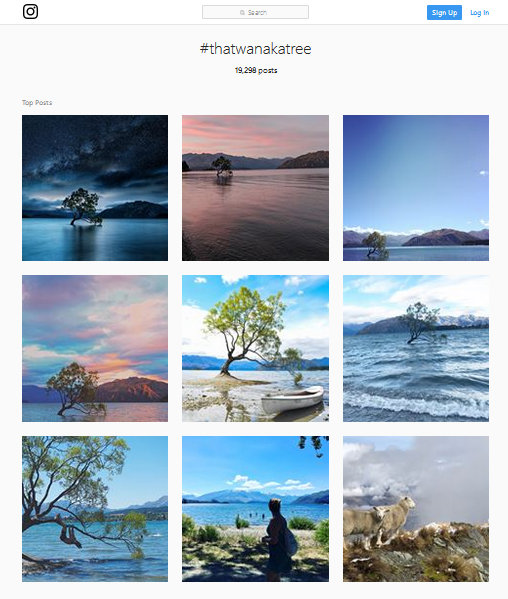 Despite warnings from the council gaining international media coverage, the photo of the man hanging off the tree was uploaded less than 24 hours ago.

‘The loss of a branch is a big concern as it takes longer for this particular tree to regenerate,’ a Queenstown Lakes District Council spokesman told NZ Newswire. ‘It’s quite a small tree growing in a challenging environment with its roots often completely submerged in alpine lake water. When bark falls off, which is more likely if people climb on it, the wound can be a focus for decay fungi and other diseases. If people weren’t taking photos, they wouldn’t climb it.’

Warning signs in English and Mandarin will be installed to ask visitors not to climb the 70-year-old tree.

Beat it, Kook!
Landscape photographers are willing to promote destinations and share the locations of images. The surfing community- not so much.

For decades surf media and brands exposed choice breaks, which drove hordes of surfers to travel far and wide to find a perfect wave.

Local surfers became increasingly frustrated when their home break was exposed. Visitors rolled into town, crowding the waves, with some tourists lacking surf etiquette and showing poor behaviour out of the water as well.

The knee-jerk reaction to the problem was localism, unsavoury tribal behaviour motivated partly by entitlement – but also conservation.

Surfers learned that over-saturation could kill a coastline.

The slightest change to the fine balance shared between the ocean and foreshore has made many surfers proactive protectors. If it all starts with a photo, it’s no surprise that cameras aren’t always welcome at sensitive surf spots.

Surf photographers who want to maintain a good reputation know that location discretion is essential to respecting an area. While it’s an imperfectly self-regulated system, most surf photographers obey this unwritten law. Although there are exceptions.

Just like Jason would have no issue with landscape photographers sharing details of hot spots like Wineglass Bay in Tasmania, a surf photographer is free to name famous surf spots, like Bells Beach.

But revealing the details of more sensitive locations may make the photographer a marked man, or simply shunned.

The overall culture dictates that it’s not cool to blabber and boast to the masses.

With Instagram and its landscape photography trophy hunters, the broader natural environment which photographers love to capture may also benefit from being protected and kept a little under wraps.