Adobe will soon release an update for Lightroom Classic which it claims will provide a much-needed performance boost. Trouble is, it’s optimised to only work on computers with 12+GB of RAM. 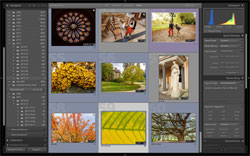 Lightroom’s sluggish performance has been the bane of many photographers for years.

Adobe, a company which rarely admits its failings, even conceded the software was slow.

Then Adobe split Lightroom into two versions – the new user-friendly stripped-back CC, and the old pro-oriented Classic. Despite claims of a performance boost, the software was still sluggish and was riddled with bugs.

Adobe removed bugs with a December 2017 update, and has promised to focus resources toward improving performance, and now it’s kind of delivering with Lightroom Classic 7.2.

Adobe says it has been ‘working with our partners at Intel on addressing key performance issues’.

Sorry, you may need a magnify glass to read this data sheet! Source: Petapixel.

Adobe claims most Lightroom Classic users have at least 12GB of RAM, but to get the results it achieved it ran tests on top-range machines. DPreview trialled 7.2 on a 2015 Quad-core MacBook Pro with 2.2GHz quad-core Intel Core i7 and 16GB of RAM, a machine photographers are more likely to own.

Export was between 10 and 11 percent quicker, while Import saw a ‘major performance boost’ of 80 percent.

Adobe says it’s far from done, and more updates are in the pipeline.

Dpreview’s top comments suggest that photographers care little for Import and Export performance boosts. It’s during this process they take a break. It’s real-time editing speeds which slow a photographer’s workflow and make the Adobe software a pain to use.