Adobe has announced major changes to its image editing software, Lightroom CC, which has been split into two apps – a new, entirely cloud-based, mobile and user friendly app, and the ‘old version’. 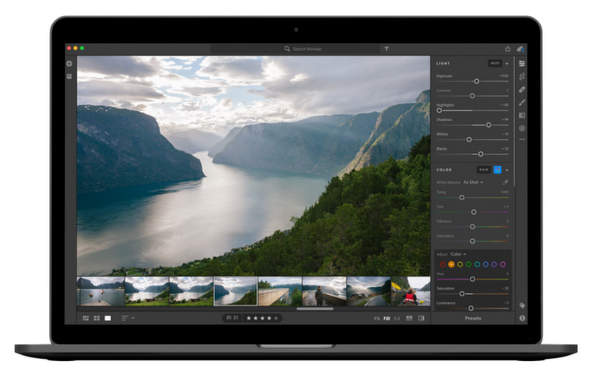 Adobe subscribers can either stick with the old version, now called Lightroom Classic, or move everything onto the cloud. It’s all quite confusing, and photographers aren’t entirely impressed with Adobe’s profit-driven direction.

The new Lightroom CC has a cleaner interface, strikingly similar to the Mobile app. All photos must be uploaded to, and accessed from, Adobe’s cloud storage.

It’s obvious the new Lightroom is targeting a wider market of consumer photographers.

Adobe has been eyeing off this market for years, but its core customer base of professionals stood in the way. By splitting Lightroom into two apps, with a preference toward the ‘dumbed down’ version, it’s clear where Adobe’s loyalty lies.

What’s changed?
Lightroom CC has been integrated for use on desktop, mobile and web. Unfinished edits can be saved to the cloud and instantly accessed across any device, provided there’s web access.

An early report from respected online review website, Imaging Resource, has bagged Adobe. It says the new Lightroom doesn’t support multiple Catalogues, only one; doesn’t support third party plugins; and can only sync an entire library to the cloud rather than a selection of individual files or folders.

The sync issue means photographers may quickly reach their 20GB storage limit with images they don’t want stored. But fear not! For an additional US$10 monthly payment, Adobe will offer 1TB of storage. (It’s not clear how much this will cost in Australia)

Raw+Jpeg files are handled as separate files. Both files can’t be filtered, and aren’t identifiable with an icon. File names are hidden, there’s no search of metadata, and no colour labels.

Instead, an algorithm will tag photos, and images will be searchable based on keywords – cat, concert, wedding, face, car, sunset, and so on.

All the same tools and controls are still there, ‘it’s just that by default we’re not overwhelming you,’ says Tom Hogarty, director of Digital Imaging product management at Adobe.

Split toning and tone curve are missing, according to The Verge. Maybe they’ll turn up somewhere down the track.

Adobe engineers will focus their energy into improving the new Lightroom, which doesn’t come across as a finished product. Adobe says Lightroom Classic will continue to be developed, but many are conscious that it has been branded as a legacy product – a sign its day’s are numbered. It needs to be remembered that in 2013 Adobe also said that Lightroom would continue to be available via perpetual licence indefinitiely.

Lightroom 6 is the final perpetual-license version of the software. It’s a matter of when, not if, the product will be killed off. After the Nikon D850, the software will no longer receive  updates for newly-released cameras.

Customers respond
The new Lightroom answers the main gripe photographers have had with the performance of the program – slowness. Due to Lightroom building updates onto an outdated foundation, it became sluggish and full of bugs.

The new version is apparently much quicker, and Lightroom Classic has also been given a speed boost, but customers didn’t want this solution to the problem.

‘Instead of just giving us a really good Lightroom, they split their resources to create these two branches of the product, building a gimped consumer-focused product from scratch and only gave us marginal updates to the “Classic,” real product,’ writes Jaron Schneider for Imaging Resource.

‘If you’re upset with this, it’s time to really root for other brands if you don’t like what you see in Adobe. Time to earnestly switch to Capture One or Affinity Photo. When a new version of a competing program is released, buy it. Adobe isn’t listening to your voices, that much is now inarguable. It’s time to talk with your wallets.’

Over at CNet, Lori Grunin described the new software as ‘bringing the limitations of mobile to the desktop’, rather than the power of the desktop to mobile.

‘Time to start looking for a Lightroom alternative,’ was typical of reader feedback. ‘I will not use any software that holds my work hostage to an ongoing subscription fee; even if the original files would still be present, I would still be locked into paying to keep access to all of my editing and PP work.’

The announcement is only a day old. This criticism is the tip of the iceberg for Adobe. Many customers see the move by Adobe, which has a near-monopoly on image editing software, moving aggressively to maximise already fat profits, while not listening to consumer demands.

Subscriptions just became more expensive, as professional photographers will need the optional 1TB of storage. With the photos trapped in the cloud, customers will be forced into a lasting relationship with Adobe.

If there was ever a time to ditch Adobe, it’s now. Fortunately, there are alternatives out there, like Capture One, On1 Photo Raw, Macphun Luminar, Affinity Photo, Corel Paintshop Pro, Gimp, and even Apple’s discontinued Aperture.

One thought on “Adobe splits and dims Lightroom”