Australian intellectual property advocates have welcomed the Federal Government’s decision to extend public consultation before determining whether to adopt a potentially harmful US-style ‘fair use’ exception to copyright infringement. The consultation period will begin in 2018. 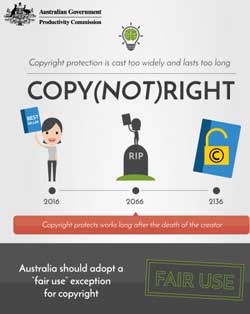 The Productivity Commission believes copyright law in broken in Australia.

While it accepted a number of PC suggestions, such as forming an IP Policy Group and phasing out the Innovation Patent System, the government backed away from the controversial ‘fair use’ recommendation and will look at ‘flexible’ exceptions instead.

‘The government’s aim is to create a modernised copyright exceptions framework that keeps pace with technological advances and is flexible to adapt to future changes. There are arguments that Australia’s current exceptions for fair dealing are restrictive when compared with international counterparts and may not permit some reasonable fair uses of copyright material. However, this is a complex issue and there are different approaches available to address it.’

‘Fair use’ permits copyright infringement provided certain factors are met. Transforming a protected work into ‘something new’ is a major factor, and ‘fair use’ in the US has allowed individuals like Richard Prince to profit enormously from a photographers’ hard work.

In Australia, ‘fair use’ would replace the ‘fair dealing’ provision – a prescribed list of scenarios which permits copyright infringement.

Photographers and other small business creatives are concerned ‘fair use’ will relax copyright law. 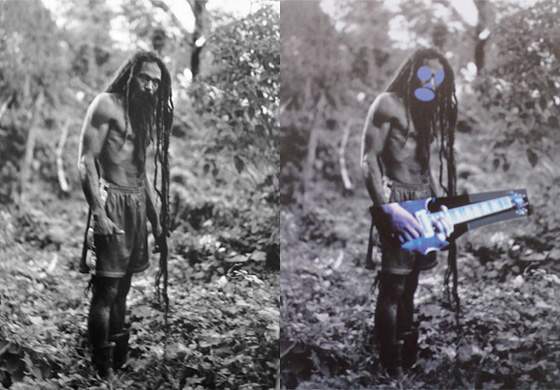 This is ‘fair use’. French photographer Patrick Cariou sued Prince in the US for copyright infringement, but Prince was let off by arguing his appropriation was ‘transformative’ and therefore ‘fair use’.

Loosely connected to ‘fair use’ is the adoption of an ‘orphan works’ policy, which would limit liability for copyright infringement when content is detached from its author. The government supports orphan works but will further consult before taking action.

In practice, ‘orphan works’ applies in instances where a ‘diligent search’ fails to find a rights holder. The policy has had strong support from the education sector, as well as libraries, which have been unable to use and distribute certain resources due to it not having a known author.

‘The government recognises the difficulties both creators and cultural and collecting institutions face in utilising orphan works. It stifles the ability for knowledge to be shared and new content to be created,’ the government said.

Like interpreting definitions of ‘fair use’, the ambiguity of a ‘diligent search’ is left wide open.

The ‘fair use’ fight
A battle has been fought since ‘fair use’ and orphan works were brought to the table in 2014 by an Australian Law Reform Commission inquiry.

On one side there are content creators – authors, photographers, musicians, artists, and professionals who rely on copyright protection to make a living. They are represented by industry groups such as the AIPP and Australian Publishers Association, as well as copyright advocacy groups and companies like the ACC, and Copyright Agency.

On the other side there’s the education sector, which stands to save millions of dollars with freer access to copyrighted material. Through the Australian Digital Alliance (ADA) lobby group, they’ve found an odd partnership with Google, which has aggressively lobbied to diminish the concept of copyright to ‘monetise’ content it has neither created nor paid for.

The ADA has been a well-funded and vocal group in campaigning for the introduction of ‘fair use’.

Both sides have undertaken major PR campaigns and lobbying efforts to persuade the public and government.

‘We welcome the government’s recognition that it is critical to have in place a copyright regime that supports Australian creators and innovators, encourages ongoing investment in creativity and the telling of Australian stories,’ said Copyright Agency CEO, Adam Suckling. ‘The Productivity Commission had recommended Australia import a fair use copyright regime from the US. The introduction of fair use would have seriously undermined Australian writers, journalists, film and television-makers and artists, as well as all the great companies that invest in Australian creativity.’

The AIPP said that it’s ‘good news’ that the government is stalling ‘fair use’, and that it hasn’t ‘just been accepted or rubber-stamped’.

It’s a victory for content creators, for now. ‘Fair use’ hasn’t been put to bed, and the two sides will continue to campaign until a resolution is found.