Jesse Walker, an Australian photographer arrested in Egypt earlier this year for conducting a nude photo shoot, has turned his bad experience into a publicity stunt for his company, Enki Eyewear. 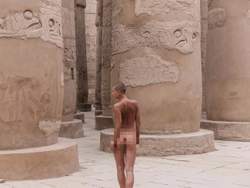 One of the photos, blurring courtesy of Daily Mail. Source: Enki Eyewear.

Walker and Belgian model, Marisa Papen, travelled to Egypt in April with plans to capture undressed photos at historic landmarks, including the Luxor temple, and at the Giza Pyramid complex.

Common sense may suggest this was not a good idea. Historic landmarks are typically sacred places – unfit for nude photo shoots which promote sunglasses. Especially in Islamic countries.

(And if Egyptian bureaucracy is anything like Australia, they were probably required to fork out hundreds for a commercial photography permit!)

Walker and Papen told media they were caught three times in Giza prior to their arrest. Each time a bribe managed to get them out of trouble.

‘As soon as we would see them (the guards) I would delete the photos because I have software that retrieves data,’ Walker told Nine News. ‘We would play a bit naïve. We would say it’s an art project and the concept is ancient Egypt, the time of the kings and the queens and the pharaohs, which was true.

‘One time, we were in the middle of the desert and this car just came roaring out of the nowhere and there was dust and smoke and sand everywhere. It was the military police and I was yelling at Marisa “put your clothes, put your clothes on”.’

The two weren’t so lucky at a temple in Luxor. A guard ‘just wasn’t going’ for the bribe. He strip-searched Walker, looking for a memory card, and hauled them off to jail for the evening.

In the early morning hours, after only a few hours behind bars with fellow inmates, Walker and Papen faced court.

‘We explained the concept to the judge that it was an art project and we basically told them that Marisa was just topless. We told them she had pants on. The judge let us off with a warning. He said this is an Islamic country and if you do it again we will put you back in jail.’

The two left Egypt shortly after and earlier this month posted the photos to the Enki Eyewear website, and Papen’s blog. Papen justified the shoot by arguing that the temples have nothing to do with modern religions, and Cleopatra would probably have dug the photos.

Rather than feeling slightly embarrassed about the ordeal, the two have used the experience as an opportunity to attract media coverage to the photo shoot and their brands.

Walker told the Manly Daily he has no regrets and would do it again.

Mainstream media picked up the story, with particular interest from Murdoch media, which can’t resist a story that covers nudity, foreign jails, and an Islamic country!