Ghosts of the Arctic, an awe-inspiring short film following Australian polar photographer Joshua Holko as he journeys through the Arctic winter to capture endangered polar bears, garnered over 100,000 viewers in less than a week. 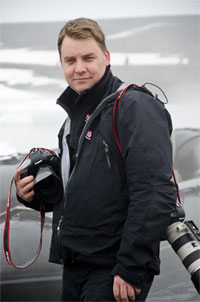 The film, a passion project planned over two years ago by an Australian-based film crew, was shot in Svalbard, Norway – an ice and snow covered Arctic archipelago sparsely inhabited by humans.

While Ghosts of the Arctic presents a beautiful, snow-covered landscape rich with glaciers – a winter wonderland – Holko explains that the conditions were brutal.

Temperatures never rose above -20ºC, leaving the crew prone to first- and second-degree frost bite, and resulting in equipment difficulties and failures.

‘We were exposed to the cold and elements for up to 16 straight hours a day. Many days we drove over 200 kilometres on our snow mobiles in very difficult terrain and conditions as we searched for wildlife. The bumpy terrain left us battered, bruised and sore,’ Holko wrote of the experience. ‘We experienced three cases of  first- and second-degree frostbite during the filming as well as a lot of failed equipment and equipment difficulties as a result of the extreme cold.

‘We had batteries that would loose their charge in mere minutes, drones that wouldn’t power up and fly, cameras that wouldn’t turn on, steadycams that would not remain steady, HDMI cables that became brittle and snapped in the cold, frozen audio equipment, broken LCD mounts, broken down snow mobiles and more. We existed on a diet of freeze dried cod and pasta washed down with tepid coffee and the occasional frozen Mars Bar.’

He adds that simple tasks like removing his gloves to change a memory card come with serious risk, and in one scene he removed his face covering for just three minutes, which left him with frostbite.

‘And whilst not all of this will come across in the film, I think I can safely say it was without any shadow of a doubt the toughest film shoot any of us have done,’ he said.

Yet, there’s few Australian photographers – or even from around the world – who feel more at home in these climates than Holko, who has carved his name into the ice as a leading Australian wildlife and nature photographer.

Despite the challenging conditions, the final result is a spectacular short film.


Ghosts of the Arctic from Untitled Film Works on Vimeo.

Joffe and West filmed the production in 2.35:1 cinema ratio in 4K High Definition with Canon, Red, Sony, and DJI camera (and drone) systems.

Holko is currently heading back to Svalbard to run a summer photo expedition.

‘Svalbard has become one my absolute favourite places in the world to visit and photograph and I find myself yearning to return whenever I have to leave and itching to get underway whenever an opportunity to visit or a new expedition approaches,’ he wrote in his blog. ‘There is something about the primordial landscape and environment in this region of the Arctic that I find incredibly haunting. It is a landscape that speaks to me on many levels and is now a place I consider very much my home away from home. I simply cannot wait to return.’

No wildlife was interfered with during the making of Ghosts of the Arctic.

One thought on “Film tracks photographer into deep Arctic”