A photo of Indigenous land rights campaigner, Eddie Mabo, and his legal team has highlighted how an image can easily become an ‘orphan work’ when it is detached from the author who hit the shutter button. 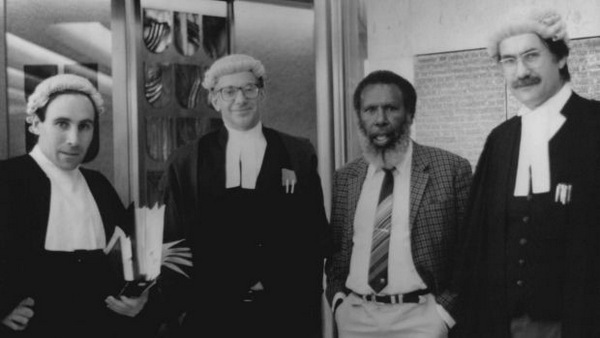 The photo above was taken in 1991 at the High Court of Australia, during the landmark court case which, after more than a decade of legal battles, resulted in the recognition of native title in Australia.

‘Orphan works’ is a component of the US-style ‘Fair Use’ exception to copyright infringement, which soon will be before the Australian parliament.

If it’s introduced, as is the Productivity Commission’s recommendation, copyright infringement will be pardoned in a number of instances, including if the work is an ‘orphan’ and an author cannot be identified. Given that stripping out EXIF data is enough to separate a photographer from their images, this is a major threat to the photographic profession.

The Mabo photo is often used to illustrate stories about native title and indigenous rights. It’s also a classic example of how easy it is for photographers to lose their copyright.

Running it through Google Images Reverse Search shows it has widespread use in mainstream media, educational institutions, activist and humanitarian organisations.

The photo is rarely credited, and in the rare instance that it is, the barrister featured, Bryan Keon-Cohen is attributed as the creator.

Australian Copyright Council director, Fiona Phillips, knows the story behind the photo and has cleared up who hit the shutter button. It was taken on Keon-Cohen’s camera – but he didn’t use a self-timer.

Instead, he handed the camera to Lindy Castan-Blashki, the daughter of the late Ron Castan (also featured), a barrister and human rights advocate who played an important role in a number of Indigenous land rights cases.

Castan-Blashki, who was studying law at the time, captured the photo and it’s likely Keon-Cohen distributed it.

Things become murkier with photos, particularly when an image takes on a life of its own online – this Mabo image for example.

It’s only because the Copyright Council’s Fiona Phillips is a friend of Castan-Blashki that she knows who hit the shutter button.

Castan-Blashki is proud of her photo’s widespread use, and that it has been a visual aid for the Mabo case, the tireless efforts from those involved, and the broader topic of Indigenous land rights.

When speaking with ProCounter she wasn’t aware she technically owned the copyright, but was glad the photo was still regularly published, as it indicates the landmark Australian case remains an important topic.

The orphan works exemption is convenient for universities, libraries and other organisations in possession of work they wish to republish or distribute, when they cannot find the author. However copyright experts such as Phillips, are concerned it may affect a photographer’s ability to control and earn a living from work. Internet giants such as Google and Facebook are lobbying aggressively to diminish the concept of copyright so they can make more money from content they have neither created or paid for.

‘In this instance, it was only because of my personal knowledge of the circumstances in which this photo was taken (and of copyright law) that I was able to attribute the photographer,’ Phillips told ProCounter. ‘This shows how easily information about authorship can be lost. Given that this photo was only taken in 1991, logic suggests that it would not be in the public domain. It is important that any provisions for orphan works not only allow for “diligent search” but also for what happens when an author does come forward.’