Frustrated Adobe Creative Cloud (CC) customers are cancelling subscriptions after yet another Australian price hike was announced, which marks an almost 250 percent increase in prices for some customers since the subscription model was adopted. 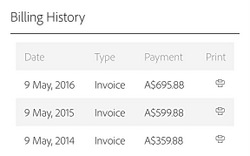 Prices have risen considerably each year for some Adobe CC customers. Source: Gizmodo.

The price rise was attributed to a fluctuating exchange rate, the same excuse used to bump prices up in May 2016.

Subscribers with the Photography Plan will pay $14.29 per month from June 5, a $1.10 increase since Adobe introduced GST to subscriptions in December. Upon its initial release in 2015 it cost $9.99.

While a total increase of $43 annually since it began shows prices have crept up – it’s customers using the entire software suite who will feel a greater sting.

This time last year Westpac Business Focus reported the Australian dollar closing at US$0.73. Whereas now it’s worth US$0.74 – not much has changed. Few are buying Adobe’s excuse that the dollar has ‘fluctuated significantly’.

A photographer who informed ProCounter of the price hike said they are tired of dishonesty from Adobe.

‘I’m considering cancelling my subscription. Not because of the price increase, but because I feel Adobe are just taking customers for a ride and blatantly lying by using the now-classic “exchange rate fluctuation” – something an Australian consumer of any digital product is sick of hearing!

‘The cost of the item isn’t so much an issue as I look at it as purely the cost of doing business, I just don’t like having my intelligence insulted by a big corporation, which knows it can get away with it.’

He suggests it could be a matter for the ACCC.

Adobe users fire up
The Adobe Australia and New Zealand Facebook page is flooded with posts from angry users, particularly design students forced to pay substantially more for a CC subscription, which is mandatory for their course.

‘As a design student I have no choice but to subscribe to the suite. In the 1 – 2 years I have subscribed, you (Adobe) raised the price by almost 250 percent. And now you’re raising it again – how can this possibly be justified by exchange rates? There is a reason we subscribe to the student package,’ a disgruntled user posted to the Adobe wall. ‘This price hike is going to mean students have to make a decision on whether to continue subscribing to Adobe or being able to afford to rent, buy groceries, and go to uni.’

Many customers hope Adobe will reconsider the price hike, while others ended their subscription – resulting in a $29 cancellation fee, no less.

‘I love the irony of the last time I’ll use an Adobe CC product is to crop a screenshot of my cancellation of their overpriced software rort. Adobe Australia and New Zealand – get real,’ said another.

While Adobe effectively holds a monopoly on image editing software, alternative products from companies like Phase One, Serif, On1, Macphun, and GIMP are becoming more attractive to those wary of the software giant’s profit-driven business model.

On1 has a marketing strategy based around adapting photographers’ workflow from Lightroom to Photo Raw, its post-processing software.

‘What’s left to say – I’ve been faithfully using these products for nearly 15 years and I’m ready to look elsewhere,’ another customer said. ‘I’m sick of the price hikes we experience here in Australia for no other reason than they can get away with it. These angry emails will continue to be ignored by Adobe no doubt, hopefully to their peril.’

Click here to read more about Adobe’s move to the subscription model, and the up-and-coming alternatives to Lightroom and Photoshop.