British lighting manufacturer, Rotolight, has unveiled the AEOS – a portable on-location LED lighting kit ideal for photographers on the move. 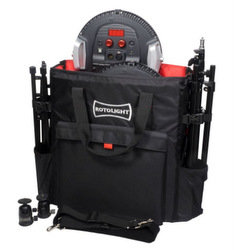 The bi-colour LED light has an ‘ultra-thin’ 1cm thick design, weighing 1.5kg, while delivering a power output of 5750 lux at 1 metre.

On a single charge of the 95W battery, the AEOS can run for three hours at 100 percent power, which Rotolight says is over twice the industry standard.

‘By being so portable and lightweight, the AEOS allows you to take a powerful LED light to locations and remote environments, enabling users to achieve shots not otherwise possible,’ said Rod Gammons, chairman of Rotolight. ‘Being both a continuous LED light, as well as a HSS flash with no recycle time provides a huge amount of versatility for photographers, in a highly compact package.’

The LED has aluminium handles which provide the ability to adjust the system to angles and positions difficult to otherwise achieve.

It doesn’t use a traditional yoke that limits the light to 30-40 degrees of tilt. Instead a aluminium level ball head provides 360-degree rotation and 200 degrees of tilt when mounted to a stand.

Other features include:
– High Speed Sync Flash (HSS) for powerful colour temperature adjustable HSS flash, at 250 percent of the maximum continuous light output for traditional photographic workflows;
– True Aperture Dimming which calculates and displays F-stop for a subject at a given distance, eliminating the need to meter.

The AEOS comes as standard with two diffusion filters – a cosmetic peach skin tone diffusion, and a magenta filter – as well as AC/DC power supply and ball head.

There is also optional accessories available, including a custom-made soft bag capable of holding up to two lights with barn doors, two batteries and two stands, as well as V-lock batteries, barn doors, rain covers, soft boxes, and a yoke for studio truss mounting.

The AEOS will be available from June.

Rotolight products are distributed by CR Kennedy in Australia.