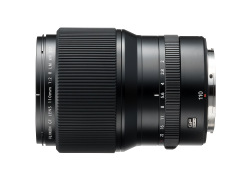 The medium telephoto, priced at $4299, is ideal for portraits. It has a focal length equivalent to 87mm in 35mm format. Fujifilm says that at f2, ‘the high resolving power of the area in focus, along with the rich bokeh unique to medium format fast diameter lenses, depicts portraits with a realistic three dimensional feel’.

The lens has 14 elements in nine groups, including four ED lens elements which are arranged around the aperture to deliver a high image quality with limited chromatic aberrations. 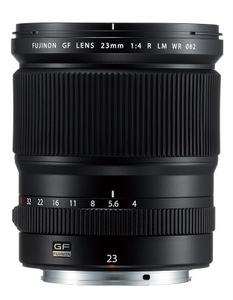 The 23mm f4 R LM WR wide-angle lens, priced at $3999, has a focal length equivalent to 18mm in 35mm format, making it optimal for landscape and architecture photography.

The lens construction has 15 elements and 12 groups, including two aspherical lens, one super ED and three ED lenses.

Despite the 99° angle of view, the construction suppresses most distortion.

The positioning of the ED lenses further reduces chromatic aberration of magnification.

Both lenses are weather and dust resistant, with nine sealed areas allowing them to be used in testing condition such as light rain, and are capable of operating in environments as cold as -10°C.

They feature an aperture ring that has a C position (command dial mode) to allow the lens aperture to be changed on the camera body. A locking mechanism has been added to the Auto and C positions to prevent unintended movements of the aperture dial.

Eyecups and adapters for GFX-50S
Fujifilm also announced a range of eyecups for the flagship medium format camera, which shield light and make it easier to see the viewfinder. The soft material also improves the fit for users shooting with the naked eye or with glasses.

A View Camera Adapter G, also set for realise in June, will allow GFX-50S shooters to use older Fujinon large format lenses, such as the CM Fujinon.