The World Press Photo Contest has denied claims that Iranian photographer, Hossein Fatemi, who was awarded second place in the Long Term Project category, broke the rules by ‘staging and plagiarising’ photos.

US-based photographer Ramin Talaie wrote a report for social journalism publisher, Medium, which accuses Fatemi of being an ‘award hunter’ who uses unethical conduct, such as misleading captions, staging and copying photos, and publishing photos without consent from the subject.

‘In the current state of the world where journalism and photography is under constant attack, and labels such as “fake news” and “alternative facts” are openly attributed for first-hand reporting, we must pay close attention to any individuals who produce fake and alternative facts,’ Talaie writes. ‘Fatemi’s manipulation of his subjects and their environment to suit his ambitions is even more dangerous as extreme use of Photoshop or altering the content of a digital file.’

Fatemi was commissioned by Panos Pictures photo agency for his award-winning project, An Iranian Journey, a documentation of the country’s complex society.

Panos Pictures said it has had to defend the work on numerous occasions, after receiving allegations against the photographer and launching an investigation which found no unethical conduct.

Talaie uses first-hand encounters from sources working alongside Fatemi to form his argument.

A former friend says he organised a shoot which resulted in Fatemi’s winning photo showing a ‘prostitute with a tattoo at the base of her spine’.

According to Talaie the friend knew the woman, who had only one child but Fatemi captioned as having two to add drama to the story.

Another photo shows a group of girls smoking shisha, ‘an act that has been banned for women in public’. Talaie asks how the photo, which was captured in public, was taken without being set up given smoking is banned – which isn’t a convincing argument.

One of the women in the shisha photo makes a second appearance in an image taken at a pool party. She is a photographer and also a former friend of Fatemi. 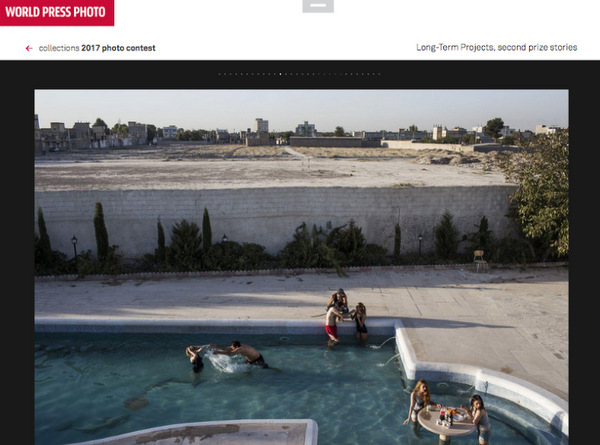 Another photo which is said to be staged, and also published without consent. Source: Medium/WPP.

Apparently Fatemi asked her to throw the party so he could photograph it, but promised not to license or publish the images. And then he did. She complained to Panos and requested it remove the photos from its archive.

‘As a result Panos removed only the one image, but kept the other photos from of same pool party including the one from WPP winning series,’ Talaie wrote.

Rostamkhani, who (you guessed it!) has severed ties with the Iranian photographer, asked Fatemi to guide the trip. The supposed arrangement was Fatemi wouldn’t use the photos, however he submitted two photos shot alongside Rostamkhani to the WPP contest.

Rostamkhani said he was surprised when he found Fatemi had published the photo on the left, as the scene was to be used solely for his own project (right). Source: Medium

Talaie made several more accusations. Some are without a factual basis, or claim that a male photographer ‘can’t have this access in Iran’ or the subject simply ‘can’t be photographed in Iran’.

This includes photos taken at a women’s gym and at a lingerie store.

Others show Fatemi has shot locations alongside other Iranian photographers.

The WPP received several other complaints against Fatemi by other Iranian photographers, but no one could produce evidence.

However Talaie’s allegations were the most convincing and prompted the WPP launch an investigation.

‘We asked him to gather as much evidence as he could, principally by interviewing people living in Iran and elsewhere, who were present when the photos in Fatemi’s winning story that were identified by Talaie as having issues, were taken. Santiago conducted hours of interviews, in addition to speaking at length with Fatemi and Talaie,’ Boering said. ‘Santiago presented summaries of his interviews and other information to the post-award jury for consideration.’

It did not ‘substantiate the allegations’, and there was ‘insufficient evidence to declare a breach of our contest entry rules’.

Boering repeatedly states the WPP could only assess whether the submitted photos broke the rules, and didn’t comment on the broader presentation of Fatemi’s work by Talaie.

‘He ignores not only the independent and unbiased nature of the Talaie Report, but also the fact that me and the  parties directly involved in the creation of some of the addressed images have all been primary sources to the Talaie Report,’ Rostamkhani said. ‘A fact that was later dismissed by the technical report of the WPP.’

Considering the allegations and broken friendships, WPP and Panos Pictures come to one clear conclusion. The Iranian photojournalism community ‘is rife with personal animosities and resentments’.