Canon is calling on professional photographers to pitch ‘remarkable projects’ through a new initiative called Show Us What’s Possible. 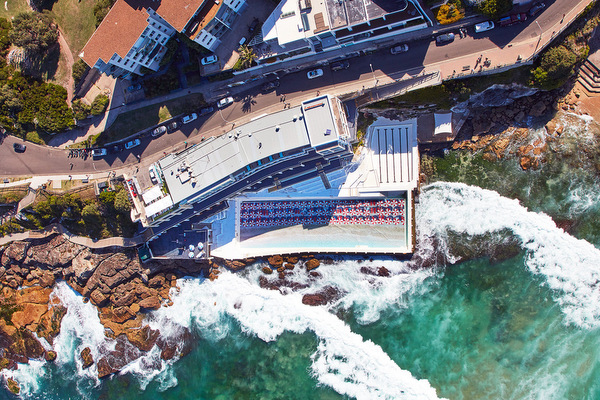 That’s a lot of paper! Photographer Eugene Tan’s image printed on the bottom of the pool in Bondi, Sydney. Photo: Eugene Tan/Aquabumps.

The company will provide funding, gear, and promotion for a series of projects which ‘redefine what we think our products can do’.

It’s open only to Australian and New Zealand photographers who use Canon products.

‘Show Us What’s Possible’ launched with an ‘audacious’ and high-cost project from Canon Master Eugene Tan.

Tan’s team installed a 46-metre long, 13-metre wide print on the bottom of the Bondi Icebergs beach-side swimming pool. The print is of an aerial photo Tan captured above the Italian Amalfi Coast, Peppermint Fresh.

The project used a Canon 5DS R camera, probably for both the Italy and Bondi photo, and an Océ Arizona 550 flatbed inkjet printer ran off the print. It took 50 hours to print before Scaffad, a building-wrap business specialising in large-scale signage, spent five hours installing the 24-piece print onto the bottom of the pool.

The Canon Master then jumped in a chopper and captured an aerial photo of his image printed on the bottom of the swimming pool.

‘I pioneered aerial beach photography in Australia over 10 years ago and have always wanted to produce one of my aerial images publicly in a huge format,’ Tan said. ‘Icebergs was a logical location choice and the closest replication of the famous Italian beach clubs on the Amalfi Coast, which has become one of my favourite locations to shoot.’

Canon has used this ‘passion project’ as an example of what it’s looking for – something it hopes will drive home the message that it is committed to supporting the industry.

Canon will launch a short documentary this month showing the making of Tan’s project.

‘We’re proud of the gear we make but it’s only in the hands of creative artists that we can see what’s truly possible when using Canon products,’ Jason McLean, Canon Australia’s Director of Consumer Imaging, said. ‘Show Us What’s Possible was born from our desire to support professional creatives in making their big dreams a reality and help them push the boundaries.’

And what’s a better way of showing support for the industry than funding a few Red Bull-style photography stunts? (We can think of at least one thing. And maybe  Canon could pay some tax at some stage if it has got the dosh for this kind of thing.)