Tourism Tasmania, a government-owned agency, has removed digital billboards that display photographers’ Instagram photos, after it emerged permission hadn’t been sought to use the images. 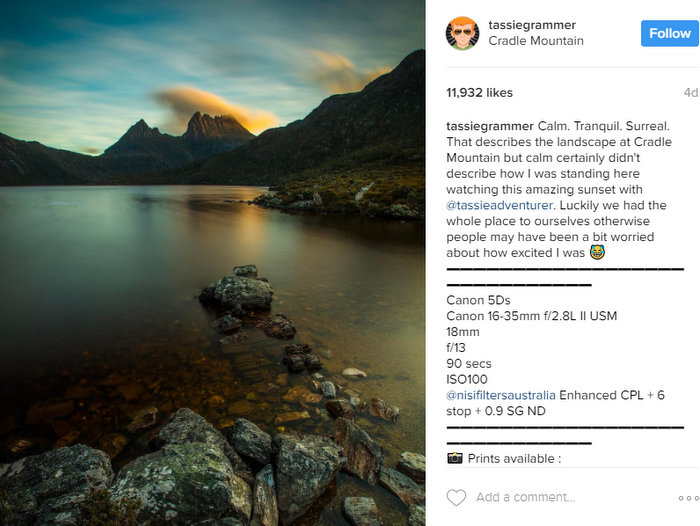 Photographer Jason Futrill, AKA @Tassiegrammer, has 42,000 followers – and is unimpressed Tourism Tasmania displayed his photos in a commercial setting without permission. Source: Tassiegrammer/Instagram.

The tourism agency sources free photos for its Instagram feed by encouraging photographers to post photos with the hashtag #discovertasmania.

This arrangement can be mutually beneficial. The agency gets free social media content, and the photographer taps into the agency’s large following by being credited.

But Tasmanian photographer Cameron Blake, who had his photos re-posted, said that showing the photos on electronic billboards at the Hobart airport went beyond the ‘social media sharing’ deal.

‘We don’t want to have a fight with Tourism Tasmania, we just want to have better conditions, a bit more understanding of what efforts we put in for our images and the fact they’re still our images, even though we’re sharing them with them [Tourism Tasmania] to share with people coming to Tassie,’ Blake told the ABC. ‘They’re not for them to just take and run wherever they like. No permission was given by us as photographers for those images to be used in that sense, and we’re just a bit disappointed that there was no consultation or any sort of discussion about that.’ 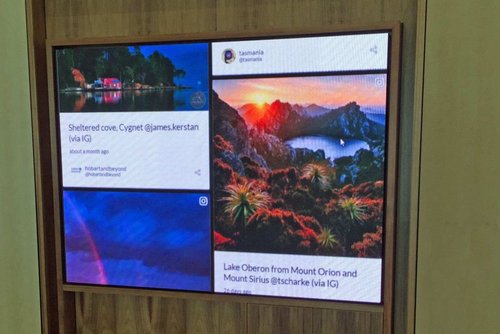 The billboard at the Hobart airport. Source: ABC

The chief executive of the State Government-funded agency, John Fitzgerald, told another photographer, Jason Futrill, that by using the hashtag he ‘implied consent’ to repost the images – a claim the ACCC may find dubious.

Futrill met Fitzgerald to speak about the digital billboards, after receiving legal advice that confirmed the use was advertising within a commercial space.

‘Our relationship with the local photography community and their ongoing contribution is important to us,’ he said. ‘They play a valuable role in our social media strategy and the sharing of Tasmania’s stories.’

Tourism Tasmania’s Social Media policy states that while it won’t ask permission to re-post photos to Instagram, it won’t do what it is apparently doing.

‘Photos posted on social media and tagged with #discovertasmania may be re-posted by Tourism Tasmania on any of our social media platforms, but we will not distribute them through channels other than social media unless we have permission.’

Tourism Tasmania adamantly denied any possibility of copyright infringement or wrongdoing to the ABC, saying the photographers were credited and the digital display was simply a projection of the agency’s feed. It’s a grey and untested area of copyright law, but by removing the billboards the agency indicated it has over-reached.

Head of the Australia Copyright Council, Fiona Phillips, said that copyright ownership provides photographers with control over how their work is used.

‘It’s all too common a situation and I suppose it’s the challenge of using social media to promote your work and the pitfalls that creates,’ she told the ABC. ‘Starting at first principles, a photographer owns copyright in their work and that gives them a number of rights; a right to be attributed as a creator of that work but also economic rights that controls who reproduces the work.’

Hamilton Island Enterprises, a tourism agency for the Whitsunday island, states in its Third Party Social Asset Usage T&Cs that the hashtag #hamiltonisland provides consent to repost and share via all social media channels. Even thgough any photographer visiting the island is likely to include this generic hashtag – if tags are their thing – whether they’ve read the agency’s policy or not. 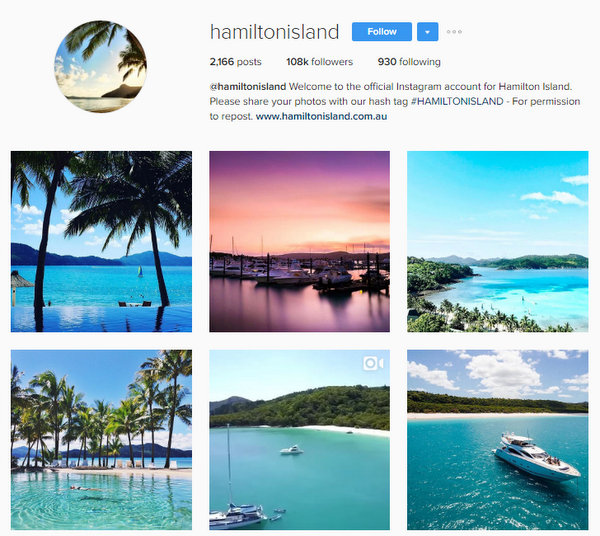 Including the less-obvious hashtag #HIShareTheLove – a tag not every man, woman and child visiting the tropical island would include in a post – hands over practically all rights to the agency, if its T&Cs are taken seriously.

‘By including #HIShareTheLove you agree to allow Hamilton Island usage of your social content. You are providing Hamilton Island or its nominees with non-exclusive, royalty-free, unlimited rights to use this content in any manner in which we may decide, including but not limited to social media, electronic communications, website, blog posts, banners, print material and other miscellaneous sales and marketing communications and materials.’

Sounds like an actual contract, and an unconscionable one at that!

The pity here is that the traditional method for an agency to source ‘unlimited rights’ photos is by hiring a photographer or licensing their photos. (Or, if advertising budgets are really low, throw a photo contest and sneaking something into the T&Cs!)

It’s hard to believe a tourist agency promoting the ‘most popular (and expensive!) holiday destination on the Great Barrier Reef’ wouldn’t have an advertising budget to cover the costs of a photographer.

As for Tourism Tasmania, it’s reviewing its use of Instagram photos.

One thought on “Tourism Tassie rights a wrong”