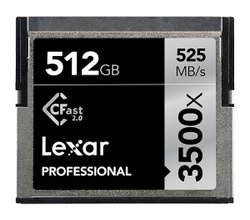 It provides read and transfer speeds up to 525MB/s and write speeds up to 445MB/s, varying based on the set up.

The card has double the memory size of the previous edition, providing cinematographers, filmmakers and photographers with the capacity and speed needed to capture 4K video and RAW photos.

‘It’s essential that professional content creators shooting in bandwidth-heavy applications such as RAW, 4K, burst-mode, time-lapse, and beyond have access to increasingly higher capacities and faster transfer speeds like those offered by the new 512GB Professional 3500x CFast 2.0 card.’

A lifetime copy of Image Rescue software is included for recovery of lost photo and video files, even if they were erased or the card is corrupted. Additionally the card is backed by expert tech support and a ‘limited lifetime warranty’.

The CFast card is compatible with the Canon 1DX Mk II, C300 Mk II, XC10, and the BlackMagic Ursa and Mini.

A version optimised for ARRI cameras, such as the Alexa and Amira, are in the works.