Every year about this time Flickr – it used to be a big deal in the photo sharing community – issues a clickbait press release announcing the grand champeen picture-taking devices for the year, as measured by the number of uploads to the Flickr site. 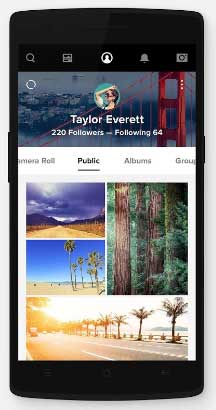 Could the autodownload feature at the heart of the Flickr smartphone app in anyway skew its ‘camera popularity’ data? (Source: Flickr)

And every year exactly the same ‘interesting/dramatic trend’ is observed, being that ‘smartphones have grown as the dominant device of choice, while point-and-shoot and DSLR cameras have both lost ground’ – or words to that effect.

Then ‘experts’ pop up with firm observations about how this spells the end of photography as we know it, and that if it weren’t for Steve Jobs no one would even bother taking pictures any more. Or that iPhones are every bit the equal of a professional DSLR kit, and its only hidebound old duffers who are clinging to such obsolete technology.

Here’s the head to the Flickr press release:
SMARTPHONES DOMINATE FLICKR UPLOADS IN 2016, APPLE LEADS DEVICE MAKERS
Nothing about the death of the camera. Here’s the twist News Ltd put on the story:
FLICKR SHOWS IPHONE, ANDROID OBSESSION IS KILLING OFF THE CAMERA
and alternatively:
Flickr shows iPhone dominates the top 10 most popular cameras ahead of Canon, Nikon and Android

And here’s what News Ltd’s veteran tech writer Rod Chester, who really should know better, wrote based on the Flickr release: ‘The smartphone revolution is killing the camera, with new figures showing how dedicated DSLRs are heading the way of the dodo.’ 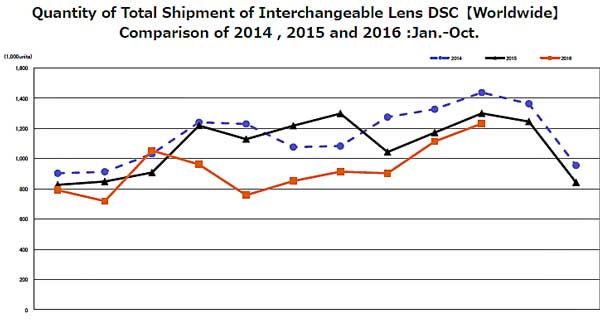 This chart from the Japanese camera manufacturers association shows that interchangeable lens camera shipments, while not as healthy as they could be, aren’t exactly dodo-like. The big dip in the middle of 2016 is largely attributable to a halt in production after the Kumamoto earthquakes in April. Manufacturers have been struggling to keep up with demand.

To justify this absurd proposition, he has to play fast and loose with the facts. Flickr has sufficient respect for accuracy to state things like: As for brands, Apple continued its dominance. 47% of all Flickr users used an Apple device to upload images to the platform (Our emphasis). But by the time old Rod has re-purposed for maximum impact, it’s become: …47 per cent of cameras used this year were iPhones, ahead of Canon on 24 per cent and Nikon on 18 per cent.

He also states that there has been a dramatic rise in the number of people who have dumped their ‘proper’ camera for a smartphone, while not supporting the assertion with any evidence – unless his misinterpretation of the data in the Flickr press release is once again his source. 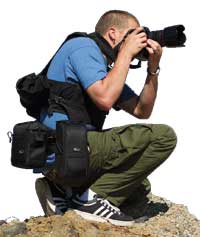 Hidebound old duffer clings to obsolete technology when all he really needs is an iPhone! (Pic source: Loewpro.)

There is no doubt that the backside is well and truly out of the digital compact, point-and-shoot camera market. And it doesn’t need much more than simply looking around you see that smartphones are replacing the compact camera. But the notion that professionals and keen enthusiasts are chucking their interchangeable lens cameras for an iPhone, or that DSLRs are heading for extinction is a touch, dare we say it, ‘post-truth’.

Flickr’s upload figures have little to do with the state of the DSLR market. For a start, Flickr has a convenient app for smartphones which by default uploads every bloody snap a user takes to the Flickr site! Uploading images from a camera is a far more considered and selective process, involving time, computers and intent. So comparing total camera uploads to auto uploads of smartphone pics to ‘prove’ the DLR is ‘going the way of the dodo’ is either deceitful or stupid. It has nothing to do with what the most popular cameras are – it only addresses the number of uploads to Flickr, and Flickr is not a microcosm of the real world – it’s just a website.

One thing the Flickr press release doesn’t address is the comparative quality of images on the Flickr site when we compare smartphones to dedicated cameras. On this criterion, another press release could be written with the headline:
SMARTPHONE IMAGE QUALITY DISAPPOINTS

Hillary Grigonis of website DigitalTrends.com distinguished herself from her technology writer colleagues by doing more than regurgitating the Flickr release with a few customised errors. She looked into the most viewed Flickr images of 2016. She found that: ‘Out of the top 50 images shared, 12 of them did not show what camera they were shot with. Those remaining 38 images with EXIF data were shot with DSLRs and mirrorless cameras, except for three advanced compact cameras and a DJI aerial camera.’

She then went on to look at Flickr’s very own nominated Top 25 images of 2016, a combination of Flickr members’ feedback and assessments from Flickr’s own curators: ‘None of the photos (that provide camera data) were shot with a smartphone.’

While Rod Chester is scuttling about like Chicken Little screaming the end is nigh for cameras, Ms Grigonis makes these salient points: ‘…the [Flickr] data only represents images uploaded to the photo sharing platform. While the trends could indicate an overall rise in the dominance of the smartphone camera, it could also simply indicate that DSLR users are leaving Flickr for another platform like Instagram, or that connectivity means smartphone photographers share more of their work than DSLR photographers.’

Rod Chester and all the other tech journalists who ignorantly put the boot into the photo industry with their ‘truthy’ take on the Flickr clickbait would do well to heed a plea from a recent Prime Minister, when referring to the media in another context: ‘Don’t write crap. It can’t be that hard.’
– Keith Shipton