Three post-processing and photo editing programs will launch this year with the aim of winning over Adobe users, and with no fresh ideas from the long-time undisputed market leader, it looks like an opportunity has emerged.

Will the Creative Cloud burst?

Serif’s well-reviewed Affinity Photo has expanded to Windows, Macphun’s recently announced Luminar, and the highly-anticipated On1 Photo Raw are described across the board as ‘serious alternatives’ to the Photoshop/Lightroom/CC range.

Even though they are a small fraction of the total costs of Adobe’s benchmark image editing software, reviewers tend to make the comparison anyway, with the new players all making claims they can do everything Adobe can do, only better (and quicker).

Available as a one-off ‘pay-no-more’ purchase, each photo editor works out way cheaper over a one-to-three year period compared to a subscription to Adobe’s Creative Cloud (CC), a monthly rental payment plan selling access, but not ownership, to the software.

CC experiences price hikes, GST and maturity
Financially, the CC has worked remarkably well for Adobe since it launched in 2012. To force the issue, Adobe replaced the one-time-purchase Creative Suite (CS) in 2013 to the dismay of many customers.

Subscriber levels have grown steadily. Each quarter Adobe reports between roughly 500,000 to 1 million new subscribers, with a total tally of 4.25 million in March this year according to tech news website Venture Beat.  (People with an arithmetical inclination might question the accuracy of these figures, and estimate it’s around double that!)

However that represents just over a third of Adobe’s estimated 12.8 million users, as estimated by investment bank firm RBC Capital Markets, indicating many customers are sticking with outdated CS programs. This is backed up by the company’s migration strategy.

‘Migration continues to represent a large opportunity,’ Mark Garrett, Adobe executive vice president, told its investors earlier this year. ‘Creative Cloud continues to distance itself from Creative Suite, and creatives are migrating as well as renewing at non-promotional pricing.’

Dumping CS and successfully migrating over a quarter of customers to an inferior rental scheme proves Adobe can do what it wants.

And incremental price hikes are tipped as inevitable – there’s been two for Australians this year, although Adobe says both are not its fault.

In May, subscription prices increased by around 20 percent, which was claimed to be due to the fluctuating Australia dollar. A Photography Plan subscription grew from $9.99 to $11.99 per month.

The second increase, taking effect from December, is apparently the fault of the Federal Government forcing Adobe to charge users 10 percent GST on top of current prices.

Chris, who doesn’t use Adobe software as a professional, said he will leave Adobe at the end of the year and is looking at alternatives, particularly Affinity. Source: Gizmodo.

The Photography Plan has had a total increase of $3.19 per month, or $38.28 per year. Maybe it won’t send a professional photographer running, but it probably won’t stop there.

A more likely factor to encourage users to embrace new software alternatives is that worthwhile Lightroom and Photoshop upgrades are these days few and far between.

Still, Adobe can rely on steady cash flow with the rental model, whereas sales would plummet if the CC updates were sold as CS7 using the old payment method. Few would bother.

Not to suggest Adobe is totally lazy, or Lightroom and Photoshop have been forgotten. Both have reached maturity, which has most customers – who are heavily invested in the software – satisfied.

After attempting to ‘dumb down’ Lightroom to make it more consumer-friendly last year, Adobe received considerable backlash from its core customer-base of professionals, and reversed the decision. It can’t get away with everything!

Adobe has moved its focus toward other ventures, such as mobile apps of traditional software, and ‘value expansion’ initiatives like Adobe Stock.

‘In terms of value expansion, we have begun to see the positive effect of Adobe Stock, our stock content marketplace. Millions of creatives use stock content and we believe Adobe has a tremendous opportunity to deliver additional value by seamlessly integrating Adobe Stock directly into the Creative Cloud service,’ Shantanu Narayen, Adobe president and CEO, also told investors. ‘We intend to become the leader in this space.’

For Adobe, it really is all about the cash, or as as Digital Arts editor Neil Bennett observed, they’re ‘money-grabbing bastards who are trying to screw money out of their customers’.

But this, um, sharp focus on monetization has left some customers furious, and allowed newcomers to enter the arena and compete with Adobe.

In the red corner…
There are long time alternatives to Lightroom and Photoshop, such as Phase One’s Capture One, Corel Paintshop Pro, Gimp, and Apple’s discontinued Aperture. But the software is built on foundations a decade old.

This is highlighted by On1 and Serif, which have prepared software purpose-built to handle huge RAW files from powerful camera sensors.

Serif, a software designer since the ’80s, has just expanded Affinity Photo to Windows.

Reviews from ePhotozine and Techradar indicate it’s extremely quick, from loading files to executing manipulations, and it has most of the desired basic and advanced tools photographers need. Editing tools are easy to locate, also, whereas Photoshop mystifies by burying them. Read more here. It’s available for US$50. 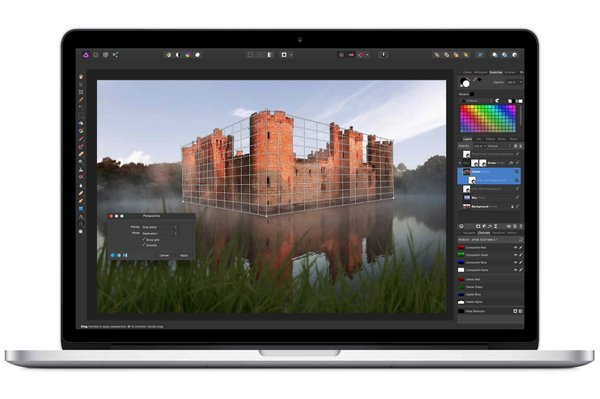 Affinity Photo received five stars from Techradar, and four and a half from ePhotozine.

‘It presents a refined approach to image editing, one that scales with your level of experience,’ writes Daven Mathies in the review. ‘Want one-click adjustments that you can set and forget? There’s a row of presets right there at the bottom of your screen. Need more advanced exposure controls? No problem – in fact, there are some 35 filters to choose from. How about layers, masks, adjustment brushes, and even a clone stamp? Yep, those are all there too.’

The interface is user-friendly and editing is done using sliders – the ‘advanced tools all work very well and there’s an impressive level of power’ according to Imaging Resource. 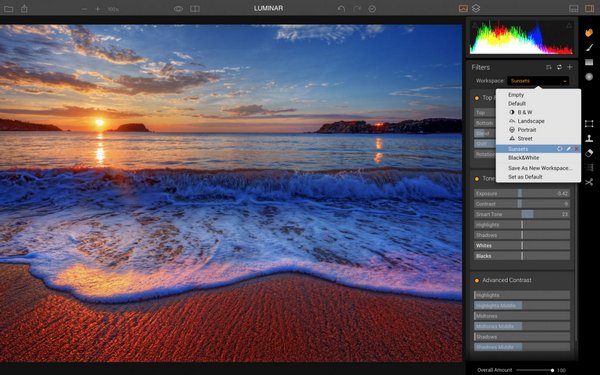 It’s quick, although US photographer Adam Ottke, reviewing for Fstoppers, noted that when dealing with 48-megapixels, things do slow down. That being said, it was a viable alternative.

‘…from what I have been able to discern, it’s an incredibly capable editor that could be a replacement for Lightroom if you don’t need or care for the file organization aspect that the Library module offers,’ he wrote. ‘In many ways, Luminar is the perfect couple-click image editor for fast adjustments or even for finishing touches on an image.’

Macphun said it’s working on image cataloguing and that the full version will be smoother and quicker. It’s available for pre-order for $84.

Finally is the much-hyped and untested On1 Photo Raw, set for a release this Spring. It claims to be way more powerful than Lightroom and the teaser video backs this up.


It has an image browser, non-destructive editing, adjustable and stackable filters, and layers.

‘Part of his plan for education is to help photographers, who are new, to come up with a good workflow,’ Patrick Smith, On1 director of marketing, told ProCounter. ‘But he’ll also be working with existing photographers’ (Photoshop and Lightroom) workflows and showing how those fit right in to Photo Raw.’

While Adobe maintains a firm grip on the creative software industry, it’s long overdue for some competition. If it’s a case of not ‘if’ but ‘when’, it appears ‘when’ is around about now. Bring it on. Monopolies by their nature are inefficient, uninnovative, and charge like bulls. Although its bean-counters probably wouldn’t agree, a bit of competition is the best thing that could happen to Adobe. More so its customers.

3 thoughts on “Will Adobe’s Creative Cloud ever burst?”