It’s official! The Civil Aviation Authority (CASA) has cut the red tape for commercial drone operators flying a drone weighing less than 2kg, and CASA reports the launch was successful with hundreds of applications coming in daily.

The DJI Phantom IV weighs less than 2kg and is the most advanced lightweight system by DJI to date.

The new rules, which can in effect on September 29, stipulate that commercial operators only need to provide CASA with details of their flight plans and carefully follow mandatory operating conditions.

‘Even before last Thursday (September 29) there were about 300 notification forms sent in by operators indicating their interest in operating drones in the under 2kg category,’ Peter Gibson, manager of corporate communications at CASA told ProCounter. ‘It was over 600 yesterday, so there’s been a pretty large and quick response. Whether those people go on to actually carry out commercial operations, who knows. But they’re filling in the form, which is free.’

The mandatory operating conditions require drones to only fly during the day in visual line of sight and below 120 metres; keeping more than 30 metres away from other people; flying more than 5.5km from controlled aerodromes; and not operating near emergency situations.

These rules are similar to what exists for recreational drone operators, who don’t require any licensing or contact with CASA. The distinguishing difference for CASA is whether money exchanges hands.

‘We were looking at the level of risk posed by the very small remotely piloted aircraft – the under 2kg ones – and the study concluded that the level of risk is far lower with these drones than with larger ones,’ Gibson said before the launching the new rules. ‘Our logic was to match the regulation with risk.’

The reality is that it’s also virtually impossible for CASA to catch anyone flying a drone against regulation unless an accident occurs or is reported. There are no drone police.

Softening the rules will please DJI, the Queen Bee of drone manufactures. It may well experience a bump in sales now the green light has been given and its two latest drones, the Phantom IV and Mavic Pro, both weigh less than 2kg.

It could have gone either way. Reports of drones falling from the sky, gory propeller accidents, and interrupted emergency service procedures could have made CASA head in the complete opposite direction with regulation. 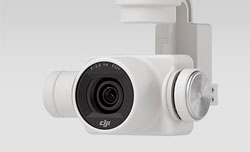 The new f2.8 aspherical lens on the Phantom 4 has ‘a 94° field of view, reduces distortion by 36 percent and chromatic aberration by 56 percent when compared to a Phantom 3 lens. A hyperfocal length of one meter allows you to get closer to objects while keeping them in pin-sharp focus’.

To perhaps curb this bad press the DJI Phantom IV is of course ‘new and improved’ performance-wise, but also has upgraded safety features.

The Phantom IV, a ‘flying camera’ with 4k video at 30fps (1080p at 120fps), has five optical sensors which can detect and avoid potential obstacles in front of it. The control will beep to warn the operator of an approaching obstacle before coming to a complete stop. The drone can also route itself around obstacles, track moving objects, and find its way home if it disappears from sight.

The advanced artificial intelligence is not quite perfect. The senses cannot detect objects to the left, right or from behind. This stops nothing or no one from smashing the $2400 toy into a brick wall, tree branch, person, or plummeting it into the ocean. It may also struggle to detect finer objects, like thin tree branches.

At the end of the day it’s over to each operator to minimise risks by acting responsible and knowing the limits. 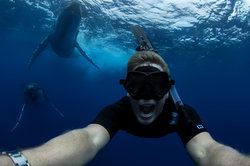 Craig Parry (left), an award-winning nature landscape photographer and Sony ambassador from Lennox Head, has grown several branches to his business thanks to his use of drone aerial photography. He recently landed assignments for Qantas and Discovery Channel.

‘It’s a pretty new form of photography, especially that straight down symmetrical style aerial photography, which is an extremely difficult angle to achieve in a helicopter,’ he said. ‘I try to think about textures and compositions before I get up there. Even now I surprise myself. Photographing dolphins and whales with no human intrusion, I’m seeing behaviours from these marine species I’ve never seen before, it’s beautiful.’

He recently visited the Daintree National Park in Northern Queensland, where he captured aerial footage of creeks, crocodiles, and the rainforest.

‘I used the Phantom IV for close proximity flying. The system enabled me to fly in tight situations, under foliage and close to creek beds without disrupting much of the leaf litter and water,’ he said. ‘I turned the safety off – it’s too sensitive and stops me from getting very close reveal shots. For instance I was flying it up a stream about a foot off the water, so it wouldn’t go that low.’

Parry is CASA certified and has flown unmanned systems for seven years. The training that came with certification was valuable, and he operates some serious drones. The Phantom IV is not his most powerful tool, however he flies it an hour a day to maintain orientation skills and technique. 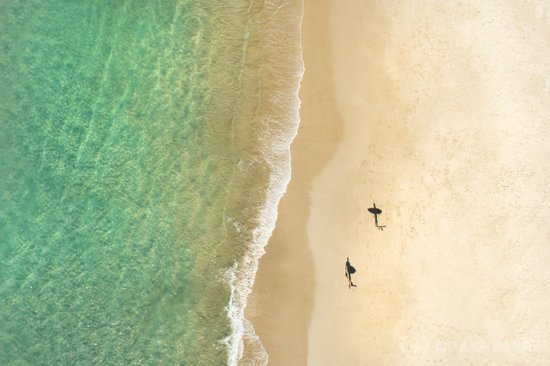 Surfers Shadows: Taken in Byron Bay, Australia. Captured with the a7r with a 55mm f1.8 prime lens, on the Tarot drone and Servo Driven gimbal. At around 2pm in May the sun creates a symmetrical shadow. Source: Supplied.

‘I’m glad I got away from it. It was a stepping stone but they are extremely dangerous – there has been recorded deaths in the past from the machines. So four years ago I was introduced to my first drone.’

This was a high-end custom-built drone, using a Tarot frame from China and a mechanical Photo Higher mechanical gimbal from New Zealand with a Canon 5K Mk III and 16-35mm lens attached.

‘I was generally just using my drone for photography, so the shakes weren’t too bad for that,’ he said. ‘Video could work if I spent enough time in (Adobe) Premier – it was far cheaper (costing around $4000 to $5000) than a ready-to-fly high-end drone.’

Last December Parry upgraded to a Freefly Alta 8, a serious eight rotor drone built for cinematography and capable of hauling 9kg of camera gear off the ground. A Sony FS5 motion picture camera or A7r II is typically attached to the system with a Freefly Movi M5 gimbal. In terms of functionality, performance and appearance it’s about as professional as a drone can get.

But it’s a heavy investment. The gimbal alone costs more than standard professional-grade DSLRs – the drone itself is upwards of $25,000. 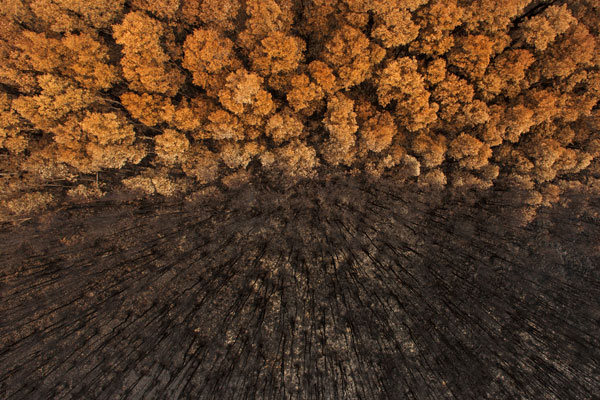 International Landscape Photograph of the Year, by Craig Parry, Australia.

So it’s hardly a surprise to learn that Parry views the Phantom IV as a toy – even though it does serve commercial purposes.

He reiterates that operating a drone is high-risk. They can and do fall out of the sky, and all professionals experience maintenance issues – the highest cause of mid-flight mechanical failure.

‘The Phantom 4 is by-far the safest and most advanced beginner system. Not only that but it is a really good tool for understanding orientation and even for professional drone operators they serve a purpose,’ he said. ‘Plus, the quality of stills and video is getting better and better.’
– This article was adapted from the original, which was published in the current issue of Photo Review Australia