Ken Duncan has stirred up a hornets nest on his Facebook page by criticising the AIPP’s direction with its Australian Professional Photography Awards, after the top prize was awarded to what he described as ‘photo illustrations’. 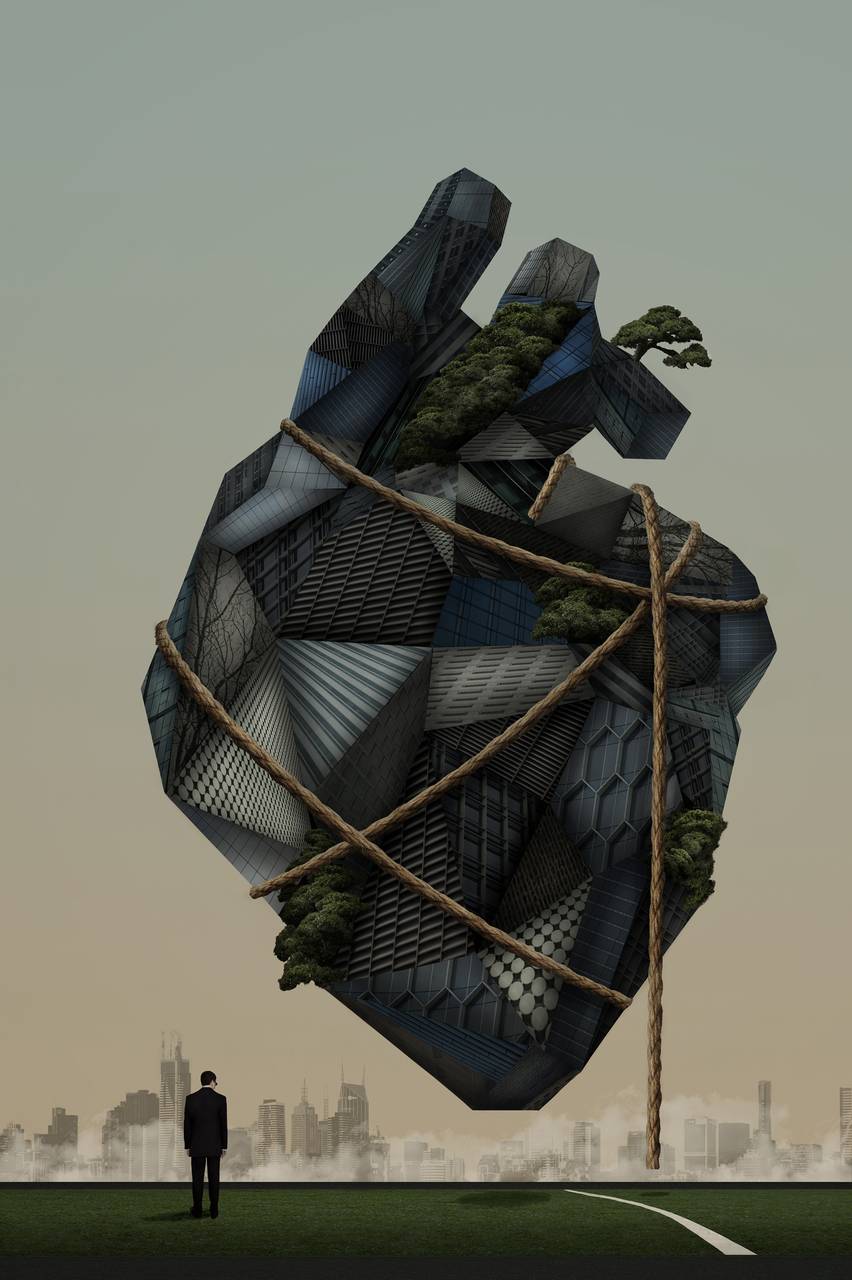 One of the winning images by Lisa Saad. Source: Supplied.

The famous landscape photographer has taken issue with the AIPP, Australia’s peak body representing photographers, for awarding the title of Australian Photographer of the Year to Melbourne commercial photographer, Lisa Saad, for a set of images that are heavily manipulated and don’t look like conventional photos.

Duncan, an honourary life member of the AIPP, began his Facebook observation by congratulating Saad but saying he was ‘concerned about the regulations and judging criteria of the (AIPP) Photo Awards after seeing the results from this year’s competition’.

‘With no disrespect to Lisa who is obviously a very talented person I just personally don’t get it. How these illustrations could be considered photographs, as lovely as judges may think they are. The word “photography” comes from the Greek words “photos”: light and “graphos”: drawing. So photography is “drawing with light”,’ he wrote.

‘This illustration and the others from the series have little to do with reflected light but more about creation by manipulating and creating pixels. I believe the AIPP have lost their way with the APPA awards as they seem to be hijacked by manipulators. Now I don’t have a problem with post-processing to a degree but when it gets to to point of having no connection to reality it then enters the world of illustration.’

Ken Duncan has campaigned to differentiate between ‘photo realism’ and ‘photo illustration’ for some time. He launched the REAL Australian Landscape Awards last year with the aim to distinguish these two emerging genres of landscape photography.

Now that the AIPP has awarded Lisa Saad the top APPA, it appears he’s broadened the scope of his criticism beyond landscape photography.

Duncan’s opinion has divided his Facebook followers, many who are professional photographers and AIPP members. There’s over 170 comments debating the topic, along with name calling, personal digs, passionate rants, and everything else you expect in an online comments section. 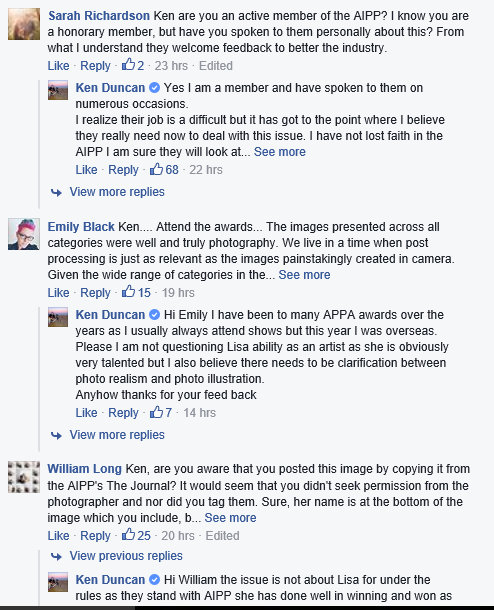 ‘All this talk about REAL photography is utter and absolute rubbish. Why on earth do we have technological advances in an industry, and then deny those who use it to be rewarded? It is short sightedness, and with respect to Duncan, he should be applauding the national body for moving with the times and rewarding work of exceptional quality,’ Adam Hourigan wrote. ‘It still holds firm to the importance of the photographic capture – but shows how the use of technology within the realm can create true works of art.

‘…views like this don’t help anyone in the industry as it stands now. Time has moved on, and just because it’s not to your tastes, doesn’t mean it’s not right. As a life member, surely you would be keen to see the institute represent photography as it is, not as it was.’

Others felt compelled to defend Lisa Saad and her images, stating that she entered and followed the rules, won fair and square, and created some amazing images.

Duncan responded to almost all these posts by saying something along the lines of ‘it’s not about Lisa and her ability as an artist it about what is a photograph and what is illustration’.

The consensus on Duncan’s Facebook post favours his opinion – but that’s expected as it’s his page, and many of his followers are likely to hold similar opinions.

There’s a fair bit of unrelated sniping at the AIPP among the commenters, indicating that not everyone is on board with the peak body representing Australian photographers.

US photography blog Petapixel posted a story based on Duncan’s controversial opinion. There, too, the comments are in favour of the landscape purist.

‘I have to agree with him. The images are great and she did an amazing job but they are not photographs, they are illustrations or digital artwork,’ said one commenter.

‘I’ve been saying this for years. Beautiful art but not to be judged as photography,’ said another.

‘One more voice to the “very nice images, but they aren’t photographs” side,’ a final commenter said.

Let us know what you think below! 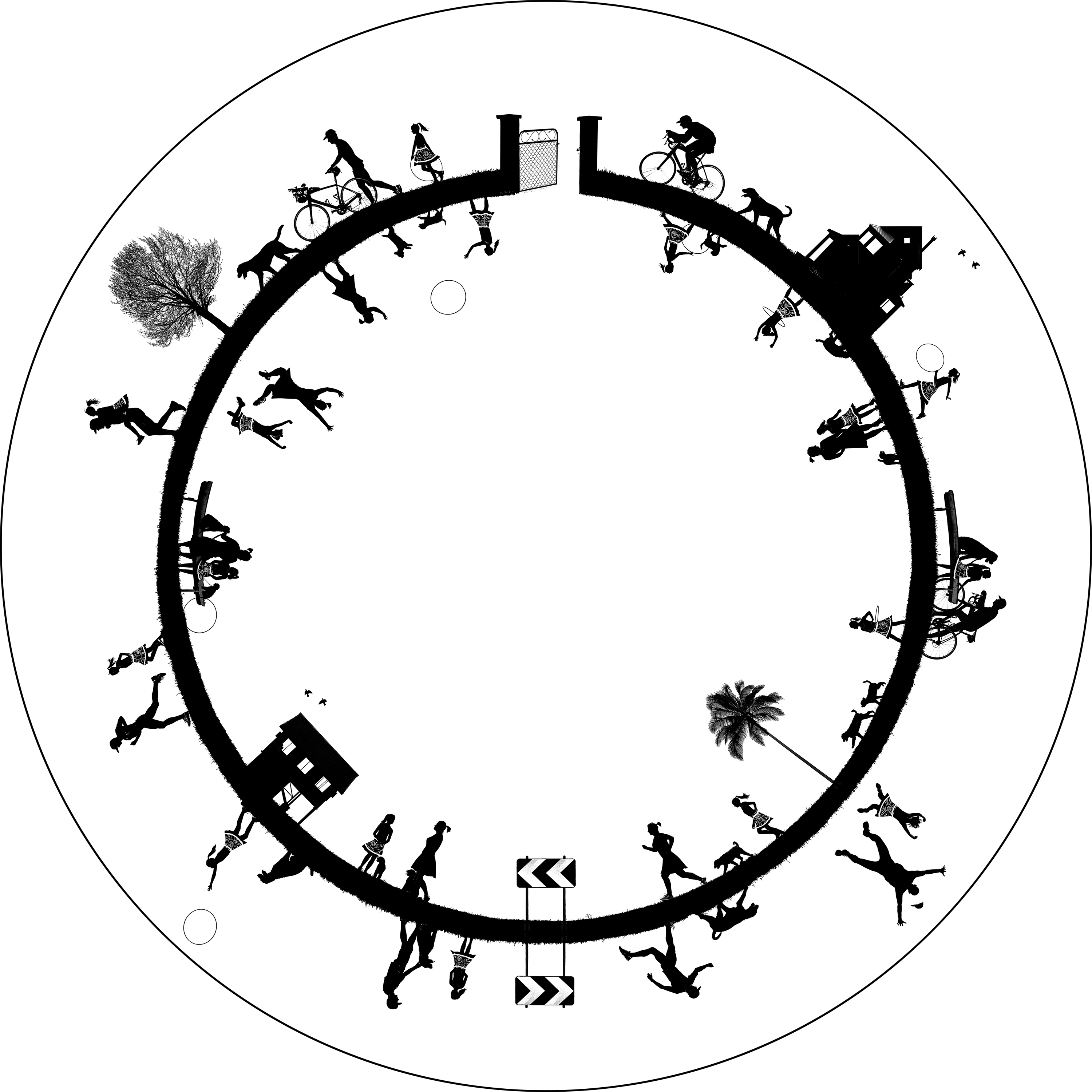 This was the highest scoring print, an image by Peter Rossi. It was also one of the four images which earned him the Portrait Photographer of the Year. Ken Duncan thinks that this is more of an illustration than a real photo. Do you agree? Source: AIPP/Supplied.