Veteran photojournalist turned visual storyteller, Steve McCurry, has been forced to defend his artistic right to manipulate photos, but promises to hold back using Photoshop for future projects. 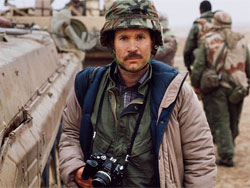 The American photographer has had a few tough weeks. He’s been the subject of a so-called Internet witch hunt that snowballed to reveal dozens of excessively manipulated photos. Not just the usual colour correction, but cloning – a practice widely considered unethical in photojournalist circles.

The US National Press Photographers Association reports that Magnum Photos, an international photographic cooperative founded by Robert Capa and Henri Cartier-Bresson of which McCurry is a member, removed several manipulated photos from its website. National Geographic also ran a ‘forensic examination’ and found two now-deleted images which violated the standards for image enhancement.

‘He (McCurry) bears the responsibility to uphold the ethical standards of his peers and the public, who see him as a photojournalist,’ Sean Elliot, NPPA ethics committee chairman, said. ‘Any alteration of the journalistic truth of his images, any manipulation of the facts, regardless of how relevant he or others might feel they are to the deeper “truth”, constitutes an ethical lapse.’

McCurry dodged questions about the photos by initially blaming a lab assistant, who he fired. Elliot asks what standards his studio has if an assistant feels they have authority to make such decisions. 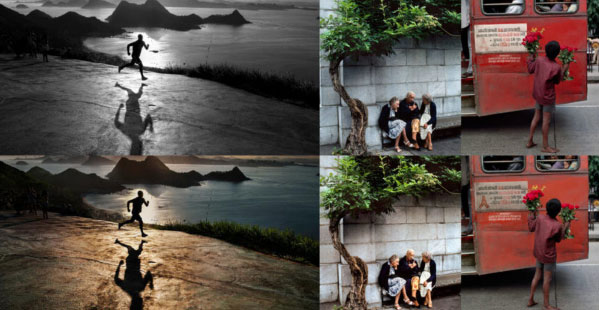 Spot the difference in the latest round of manipulated photos. Source: Petapixel. Photo: Steve McCurry

McCurry’s ultimate get-out-of-jail-free card is no longer classifying his work as photojournalism. It’s travel photography and ‘visual storytelling’, falling closer to the realm of fine art and thus not bound by a stringent code of ethics.

‘I’ve always let my pictures do the talking, but now I understand that people want me to describe the category into which I would put myself, and so I would say that today I am a visual storyteller,’ he told TIME. ‘Some of my work has migrated into the fine art field and is now in private collections and museums.

‘I understand that it’s virtually impossible to assign me to a specific category or classification, but that’s partly a function of working for 40 years, and having a career which has evolved as media itself has changed.’

As a visual storyteller McCurry believes he has the creative freedom to improve compositions by removing distracting elements. Even if that includes an entire person.

While not discussing whether it’s storytelling or photojournalism, Cole’s overall impression of McCurry’s photos is that they belong on postcards and calendars, maybe hung on gallery walls. Not on the front cover of National Geographic.

The manipulated photos, which continue to emerge, have sparked divisive opinions and articles from photographers, academics, and photo editors. It’s a new front in a debate which has been raging for some time now.

But McCurry is now ‘committed to only using the program (Photoshop) in a minimal way, even for my own work taken on personal trips…Reflecting on the situation… even though I felt that I could do what I wanted to my own pictures in an aesthetic and compositional sense, I now understand how confusing it must be for people who think I’m still a photojournalist.’