In the latest in what seems an endless stream of damaging ‘rogue photographer’ stories, a newlywed couple and former sub-contracted photographer are claiming country Victorian-based business, We Shoot Creative Agency, underpays its photographers and fails to deliver professional-quality photos to clients on time – if at all.

The couple also appeared on Sunrise to share their story. Source: Sunrise.

Yahoo7 News reported Jess and Matt Probert (right), a South Australian couple, were ‘disappointed’ and ‘shocked’ when their wedding photos arrived two months late and unedited, including shots of ‘skewed skylines… and the bridal party with closed eyes’.

‘It’s all we’ve got to remember the actual day. It ruins the memory itself,’ Jess Probert told Yahoo7.

‘They’re really disappointing. They’re not $3000 worth of wedding photos that you want to show off to everyone. They are just kind of average.’

Kelly McRae, the freelance photographer hired by We Shoot for the wedding – with only 48 hours notice – said she had her own disappointing dealings with the agency and its owner, Kirsty Daniel. She said she took on the job despite short notice, with instructions to only photograph four hours from 10:30am to 2:30pm. She stayed for an extra hour at her own expense and was unaware the father of the bride had paid for her to photograph the entire day, until 6pm.

She said she delivered the unedited photos to We Shoot two days after the wedding. Post-processing and presentation was supposed to be handled by the agency.

She was told, ‘there was a team of photographers and because they were so busy they split the work apart – she said they did 42 weddings in the last year. Little did I know the other two photographers I was told were sub-contracted had long-gone from the company. But she was still advertising they were working for her. I have contacted them both and they had similar experiences of not being paid or being paid very little.’

When she touched base with Jess Probert following the wedding, the full extent of events became clear, and since then she says she has learned that there are other We Shoot clients with similar stories.

When Jess uploaded her belated wedding photos to Facebook, Kelly saw they were unedited, despite having handed them over months prior for post-processing.

‘…When I saw them I called her (Jess) and told her they were straight off my camera and not edited at all. Kirsty told me she accidentally sent them the unedited photos and then did edit them for Jess, but they weren’t to the standard of editing you would expect from a professional wedding photographer.

‘So I told Jess I would edit them as if she was my direct client and did not charge her as they’d paid enough already.’ 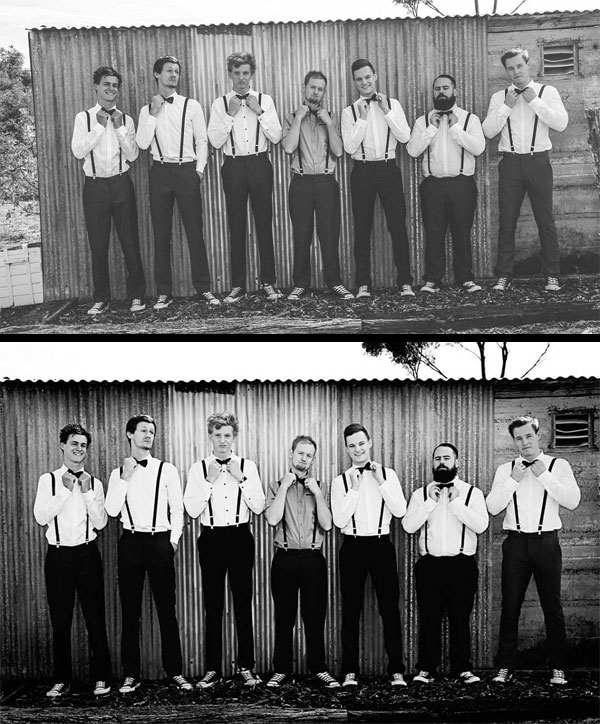 Before and after. Source: Yahoo7.

Kelly, a part-time freelance photographer based in Horsham, Victoria, who also shoots for local newspapers, told ProCounter that We Shoot  offered her 70 percent of a $1200 fee to shoot the wedding. But she said the bride’s father told her he actually paid $2800.

‘It did seem odd to me that (We Shoot) quoted the wedding at only $1200, when I had a five-hour turnaround drive (from Bendigo to the wedding location). She told me she charged less as a favour to the young couple, but when I spoke to Jess’s father I found out they paid around $2800,’ Kelly said.

After sending invoices to We Shoot it took Kelly 10 weeks to be paid, with excuses such as ‘it was transferred into the wrong account’ or ‘the client hasn’t paid’. Before leaving the company she completed two other projects, an author shoot and product shoot. She said she remains unpaid for both – a total of $600. This time she said she was told ‘the client wasn’t happy with the photos’.

‘I don’t know why she operates the way she operates because her business structure is actually quite impressive. It is a good idea and the fact that she has several photographers, graphic designers, hairdressers and make-up artists – it is very attractive to any sub-contractor because you work alongside other creative people in an industry you all love, and 70 percent is a good rate.’

Kelly isn’t interested in taking legal action to claim the $600 owed to her.
‘For me it’s not about the money but it’s that she isn’t doing the right thing by her clients or her sub-contractors and it’s a really stressful situation she puts everyone in. If you’re a client or sub-contractor, you’ll be burnt,’ she said. ‘To operate a photography business in such a manner is also tarnishing the industry. And a major concern is that my bride and groom weren’t the only couple to experience ongoing problems with the delivery of services and products.

‘So many couples have requested refunds because the service or package wasn’t or hasn’t been fulfilled. Either they don’t receive the photographs or they aren’t edited or they don’t receive a wedding album. It’s a repetition and it goes on and on – she will find more clients and more sub-contractors. People are fighting to receive the goods and services they’ve paid for.’

The Proberts aren’t interested in litigation either. Jess and Matt relayed their experience to Sunrise on the Seven Network, The Daily Mail, and Yahoo7 to warn others, but Jess said some people in the group affected – almost 15 people – are considering their legal options.

We Shoot Creative Industry was registered with an ABN in July 2015, some time after Kelly photographed the Probert’s wedding.  The business’ Faceboook page has recently been taken down.

Kelly McRae concluded that she has been put in an awkward position and doesn’t want the negative publicity to rub off on her business as a freelancer, or on the wider industry. The Proberts also stressed that Kelly was nothing but professional on the day and after the shoot.

ProCounter contacted Kirsty Daniel for comment and was told that her lawyers advised her not to make any comment – and for ProCounter to expect to be contacted by those lawyers.