Essentially, according to the AIPP, Canon was unhappy with the decision taken by the AIPP last June to combine the APPAs and the popular ‘Nikon Event’ conference and mini-trade show.

‘We did that very specifically to make it easier for the members to attend both of these fantastic events,’ AIPP executive officer Peter Myers (right) told ProCounter. ‘And we knew that as a consequence of that it may be that Canon would be unhappy with their brand being associated with an event where other competing brands would be associated.

Canon, on the other hand, put its decision down to a disagreement on the proportion of its sponsorship money going to APPA entrants and winners: ‘Importantly, we have been determined to see as much of our sponsorship dollars as possible used to support the entrants and winners directly,’ wrote Canon Consumer Imaging director, Jason McLean. ‘Over recent years, though, this has been an increasing challenge as a result of the investment decisions and changing priorities of the AIPP administration.

‘These differences of opinion between us have limited our ability to provide the help that “professional” photographers were telling us they needed through the Major Sponsorship.’

Rumours were rife as far back as The Digital Show in Melbourne last spring that Canon was intending to drop AIPP and the APPAs.

In fact, it appears the relationship with the AIPP had been showing signs of wear and tear for several years.

‘We’ve known for the best part of two and a half years that there may well be circumstances where we simply couldn’t agree to move forward, so we’ve been planning for this eventuality for some time.’

– It appears from Ross Eason’s email to members that, after a long and mutually rewarding relationship with the AIPP, Canon did not conclude that relationship as agreed: ‘We would also like to apologise to our members for not announcing the end of this relationship in a more coordinated and structured fashion,’ he wrote. ‘We believe we had agreed with Canon for the need for a joint communication that respected both parties’ views.

‘As part of that belief we agreed to delay the publication of (the AIPP’s regular newsletter) The Working Pro to allow time for Canon to refine the draft we had send to them. We were unaware they had changed their position.’

What in fact happened was that Canon put an announcement on its website last Friday afternoon over the signature of Canon Consumer Imaging director, Jason McLean, and sent it ‘directly to our pro community via Twitter, Facebook and email,’ according to a Canon spokesperson. (See text below.) This seems to have taken the AIPP by surprise. ‘This was not a media announcement and no press release was sent,’ Canon added. (Although it was in the Press Release section of the Canon website.) 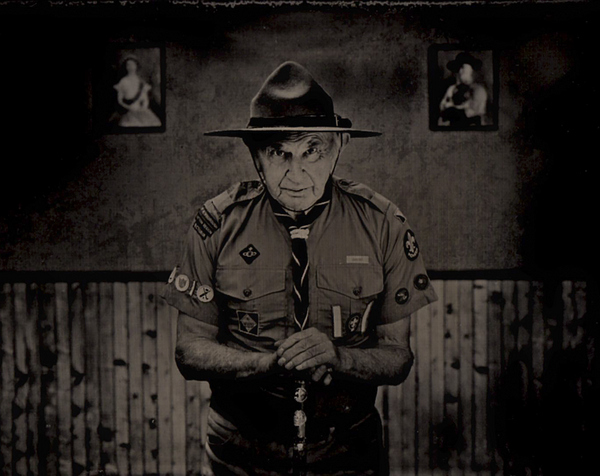 Future APPA sponsorship
When asked about a likely replacement sponsor, Peter Myers said the AIPP was ‘always looking for new trade partners that can add value to what we do.’

‘Whether that is a single sponsor or a group of sponsors depends on the conversations we have with the potential partners we’re talking to. I know that sounds evasive and I’m not trying to be evasive but we don’t have a definitive answer to that at this point in time.

‘…There are several organisations who have contacted us over the years about a greater involvement in the AIPP APPAs, and have been unable to do so because of the preclusion that Canon’s sponsorship had. So we’re now in a position to talk to those people.

‘Canon always, like anybody would, wanted a competitive advantage from their sponsorship. With that block out of the way it gives us opportunity to talk to different people,’ Peter Myers concluded. 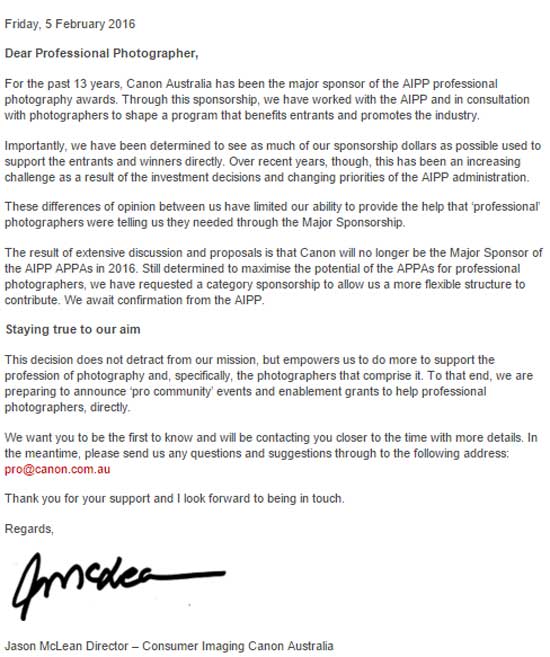 The Canon letter announcing the end of the major sponsorship was not what the AIPP expected.

Ross Eason’s e-mail to AIPP members:
It is never easy, bringing to an end a long term relationship and we know from the length of time it took, it was a difficult decision for Canon to terminate their sponsorship of the AIPP Australian Professional Photography Awards (APPA).
We would also like to apologise to our members for not announcing the end of this relationship in a more coordinated and structured fashion. We believe we had agreed with Canon for the need for a joint communication that respected both parties views. As part of that belief we agreed to delay the publication of The Working Pro to allow time for Canon to refine the draft we had send to them. We were unaware they had changed their position.
The AIPP APPA remains one of the most important events in the AIPP calendar. With a 36-year history it remains the pre-eminent awards system for Professionals in Australia, and together with the AIPP Epson State Photography Awards, forms the cornerstone of our philosophy of helping to raise the standard of professional image making in Australia through a structured peer review awards system.
We are more confident than ever that APPA will continue to evolve and go from strength to strength with the ever growing involvement of our members and the continuing support of our committed trade partners.

What does this mean for our members?
· This certainly means a new and exciting paradigm, where APPA, The Nikon AIPP Event and the new format trade show all combine to deliver, inspiration, knowledge, choice and opportunity for professional image makers.
· It also means we have the potential to work with new trade partners with the associated benefits they could offer.
· ​We can also now manage our own publicity & PR for APPA for the benefit of entrants and Category winners.

We look forward to working on this, and other initiatives, with our many trade partners, new and old, all of whom believe, like us, in the philosophy of working together for the benefit of the professional image making community in Australia.