Yet another wedding photographer has misbehaved, this time resulting in a conviction as four brides complained that the photographer failed to deliver packages, took unprofessional photos, or didn’t turn up on the day and ran off with the deposit. 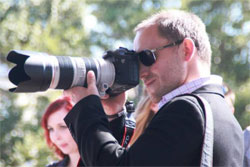 Mark Priems (right), the Newcastle-based photographer, failed to appear in court in December last year where he was convicted of multiple breaches of Australian Consumer Law. In total he owes $7500 in compensation to his clients – or victims – and has been ordered to pay $14,446 in fines.

‘This individual proved to be very evasive with consumers, as well as with Fair Trading investigators,’ Fair Trading commissioner Rod Stowe said. ‘His behaviour was unethical, and has caused considerable distress for the families involved. Fair Trading will continue to bring offenders like this before the courts.’

In one instance Simon and Sarah Williams were persuaded to transfer a $750 deposit into Priems’ account, only to never hear from him again. Fortunately the couple were informed of the photographers shoddy business practices and booked a second photographer in time for their wedding.

At another wedding Priems actually attended, he argued with the bride regarding photos and failed to capture any images of her immediate family despite charging $2750 for the shoot. 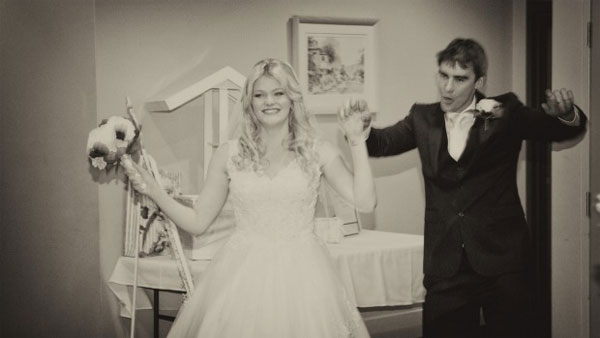 The only photo from the reception isn’t exactly worth hanging on a wall or putting in an album. Source: Fairfax.

‘The court has ruled we are eligible for a refund but he has bolted,’ Melanie Buscombe said to Fairfax. ‘I hate the thought of others having the same thing, or worse done to them.’

While convicted and now owing a substantial amount of money, Fairfax reports Priems has jumped shipped and relocated to Melbourne.

One of the couples found out about Priems in 2014 through an advertisement in a bridal magazine, and the Williams couple met Priems at a friend’s wedding and decided to book him – only to later be warned by the couple that communication with Priems had gone quiet.

AIPP Hunter Valley organising committee and Newcastle photographer Vivian Hayles spoke with the ABC, warning that brides should be careful when hiring a wedding photographer – always look for the AIPP logo, she said.

‘We wouldn’t believe it would be a common occurrence by members of our association, but that’s one of the reasons we encourage photographers to become part of our organisation. We also encourage our customers to look for people who are members of the AIPP, such that they have some guarantee of personal and professional standards.

Hayles continued ‘the association’s message is check to see that your photographer is a member of the AIPP. You can’t go back and shoot this stuff again, so better to be safe than sorry, find your professional, and use people that are accredited to a certain standard.’