Most wedding photographers will have war stories in which they clashed with or upset clients, but few – well, one to be exact – can say they have been strategically ambushed by a handful of couples as part of an A Current Affair segment.

Behind this upset newlywed wearing her gown is the A Current Affair ‘Bridal Justice Bus’, which transported the couples and crew to ambush Hollow. Source: ACA

ACA assumed the role of judge, jury and executioner in the case of Brisbane wedding photographer, Justin Hollow and his business, Lakes Photography.

Hollow was pounced on by several couples wearing wedding gowns and tuxedos who were visibly upset that he hadn’t delivered video footage of the big day as per the contract agreement. A rather bizarre scene, even for ACA.

What followed was a typical ACA-style take down of his business and his character, complete with dubious editing, nasty name calling and a one-sided argument. In true sensationalist style the photographer’s personal life was dragged into the foray.

The complaints mostly stem from the handling of video footage and the communication, or lack thereof, that followed, rather than the photography, photo albums, or photo related products and services.

One of the couples from the segment, Dean and Charmain Van Den Broek, said it has taken over nine months for the video to arrive. Several couples also confirmed they filed a complaint with the Office of Fair Trading – the appropriate authority to deal with such matters.

The photographer, who has been a professional for the last four years, states that of the 250 weddings his business has shot these are the only complaints – roughly ‘3-5 percent of clients’. He blames this on a number of factors, such as audio issues in video; hiring inadequate third party videographers and editors; and his own poor organisation.

No other media or news source besides the Gold Coast Bulletin (GCB) has reported any issues with Hollow or his business prior to the 14-minute ACA segment. The GCB report relied solely on the Van Den Broek couple’s testimony, who likely approached ACA after reading the comments section of the article to find two other couples experienced a similar issue.

And that, ladies and gentlemen, is how an ACA take-down segment is born! 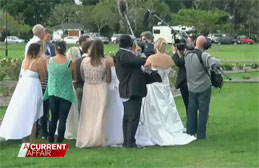 But no where else is there a negative testimonial against Hollow or his business, which employed several photographers in the past.

None of the complaints relating to Hollow is due to the quality of his photography, and he had passed the criteria to become a member of the AIPP. A statement on his website confirms he is no longer a member due to his membership lapsing, as he didn’t find the $500 fee to use the accreditation logo of value.

However the AIPP quickly distanced itself from the photographer and claimed to ACA that in April 2015 they banned Hollows from renewing his membership.

‘The AIPP, as the peak membership organisation for professional photographers, continues to advocate for advances in professional business practices, ethics and standards amongst all its members,’ the AIPP said in a statement.

‘The Accredited Professional Photographer logo, is, in an unregulated industry, a uniquely recognisable symbol of professionalism. When a photographer falls below those standards, the AIPP will always take the ultimate action of terminating membership and cancelling his/her accredited status, as was the case with Justin Hollows (sic).

So there’s an strong element of ‘he said, they said’ in whether Justin Hollow quit the AIPP or was ‘terminated’ by the AIPP but that issue aside, the photographer claims that when he was a member, the Institute didn’t offer him support or advice as to how he may be able to improve his professional business practice.

Hollow wouldn’t say anything more on the record to ProCounter but reiterated that the ACA segment has damaged his business, his own personal well-being as well as his family’s. He didn’t attempt to sidestep responsibility, and said he is doing all he can to deliver the products to his clients while fulfilling his commitments to others – and that he’s incredibly sorry.

While taking in one instance nearly two years to deliver a wedding video is way longer than acceptable, the Australian Office of Fair Trading and the Australian Competition and Consumer Commission have been set up to regulate this area of law – not A Current Affair.

Click here for the ACA segment and the AIPP statement.