The Australian Institute of Professional Photography (AIPP) has recently been granted certification of its Accreditation standards from the Australian Competition and Consumer Commission, which AIPP president Ross Eason said will help protect the industry in years to come. 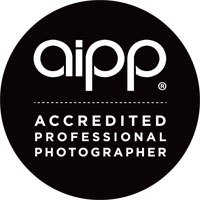 The AIPP dramatically changed its accreditation process five years ago, in reaction to a changing industry with an influx of inexperienced and unqualified photographers ‘putting out the shingle’ as professional photographers.

‘In the long run we’re hoping what the accreditation will do is create a common standard throughout Australia, where members of the public will look to that standard as a vote of confidence,’ said Ross.

Ross (pictured below, right) appreciates that many photographers run successful businesses and meet their clients’ expectations without being AIPP members, but said the point of having the ACCC grant the AIPP the right to accredit photographers is to protect the industry. 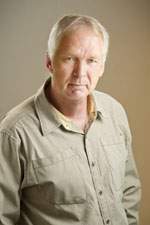 ‘For the last five or six years we’ve had members and non-members saying “the AIPP has something to do to protect the industry, and to set professionalism away from those people who mill on the fringes of professional photography”,’ he said. ‘That’s where the accreditation system came from – the demand was there and in every stage of us progressing through this, our members have been very supportive of it.’

So accreditation is a response to a global trend which the industry and the AIPP foresaw. Firstly – and as is well-known – the profession of photography has changed substantially in the last 10 years due to digital camera technology and the rise of the interwebs.

He said the AIPP often liaises with peers around the country and like organisations around the world, which are all banging the same drum – a professional standard must be set. (Which brings to mind the World Press Photo organisations attempts to set a standard on digital manipulation for photojournalists this year)

He added that the AIPP also receives an annual report on the state of professional photography from IbisWorld, an Australian-based research company that analyses and forecasts how industries will develop, with a five year projection each year.

It predicted five years ago there would be a rise in enthusiast photographers entering the professional market part-time, and they would blur the lines between amateur, semi-pro and professional photography.

Gone are the days where assistant photographers enter the industry by ‘learning those skill sets and understanding the nature of the industry through a master and mentor relationship,’ Ross said.

Instead the industry runs the risk of photographers of all skill levels being bunched into one big group with perceptions being dragged down by inexperienced or unprofessional photographers.

‘It has been incredibly accurate. Five or six years ago the IbisWorld report was forecasting in our industry the impact of the practitioner and the part-time practitioner coming into the marketplace,’ Ross said. ‘So there’s nothing we can do to stop that – there’s nothing anyone can do. It’s a free market and a free world.

‘And to be frank, for us – the AIPP – to discourage somebody else from following their passion in their career is not what we should be doing. We should be encouraging anybody with the passion and skill to follow their dreams, and the marketplace will determine whether somebody will be successful or not.’ 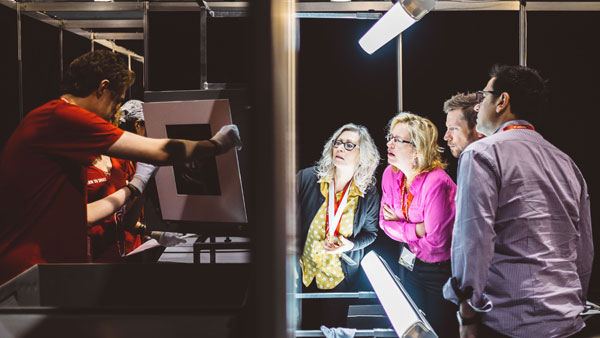 The APPAs in motion: Judges view and critique a print while volunteers prepare the next photo at the Canon AIPP Australian Professional Photographer Awards. Photo: Milton Gan (app). Source: Supplied.

The ACCC stamp of approval is part of a long-term strategy which will ideally lead to the general public seeking photographers with the ‘accredited pro photographer’ insignia as proof of their professionalism. Basically it just means an accredited AIPP photographer is much alike the aforementioned CPA; it’s a way to claim professional excellence in accordance with the requirements of peak organisation of professionals.

The AIPP will also have a greater responsibility in ensuring members are behaving at the professional standard that is expected of them.

If accredited AIPP members breach those standards there are ‘review processes’. ‘But the most we can do is remove the accreditation from that photographer or remove their membership from the AIPP,’ he said. ‘We can’t kick their doors in, arrest them and take them off to court. That’s not the aim of the AIPP.’

A different scenario which may lead to court action, however, is when a non-accredited photographer uses the accredited logo.

‘Because it’s a registered trademark, if you use that and you’re not accredited you’d be breaking at least one or two laws…Would we do something? Most definitely. We’ve already done that before, I might add. It’s not an optional situation. They can’t avoid legal action and now it’s a registered trademark and they would be breaking the law and we will pursue them quite heavily.’ (But only by reporting them to the appropriate authorities – the ACCC or state consumer affairs watchdogs, most likely. The AIPP has no plans to establishing an in-house legal or arbitration department!)

The accreditation process will remain the same, albeit a little more stringent.

Last year the Institute stepped up its scrutiny for new photographers applying to become accredited following demand from members. The amount of paperwork and proof of professionalism, and the portfolio review require a higher standard than in previous years. A photographer must have been developing a business consistently for the last two years and be able to provide documentation to prove this (ABN numbers, references from clients, public liability insurance certificate, etc.).

After that stage, the photographer will then be asked to submit a portfolio of 20 images which will be assessed by three qualified  members – and pay the annual $466 fee and agree to various terms and conditions.

It’s hard to argue that the accreditation right doesn’t give the AIPP more power – and more pulling power among those many professionals who aren’t yet members.

However Ross assured ProCounter that the AIPP has no intention of ‘putting pressure’ on non-members to sign up, but hopes it would ‘encourage’ them to think about how being a member may assist the industry.

Some Australian Commercial & Media Photographers (ACMP) ProCounter has spoken to recently have expressed scepticism after their organisation merged (or was swallowed up – depending on who you ask) with the AIPP.

The ACMP was the only professional group besides the AIPP with a high profile in the industry, and it offered a focussed alternative for commercial and media photographers.

But Ross said prior to the merger roughly 30 percent of AIPP members already defined themselves as commercial and advertising photographers. It isn’t simply an organisation for wedding and portrait photographers, he said.

Further to the point, five years ago IbisWorld predicted – correctly, according to Ross – that ‘by pure necessity the bulk of photographers would become generalist in nature’.

‘Probably the best examples of that are in the regions. Being a mainstream commercial advertising photographer in the creative hubs of Sydney, Melbourne and Brisbane is pretty easy compared to those living on the outskirts or in regional Australia. By necessity you’ll be the kind of photographer who takes anything that comes through the door,’ he said. 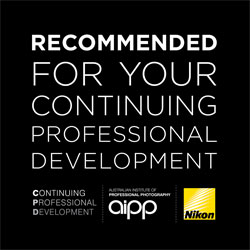 One of the upcoming Kayell events ‘Learn, Light, Shoot Hands On’, which has been granted admission into the CPD program. Incidentally it is presented by AIPP Master photographer, Natalie Howe.

A large component of the accreditation process for established members is the CPD program.

Members have to attend a number of  photography-related workshops, seminars and events on a yearly basis which qualify as continuing the development of their career.

This is similar to how doctors, lawyers, builders and accountants operate – they must  maintain and develop their standard by accumulating points to show they are up-to-date with the latest information as each industry moves forward.

But on the more mercenary side of the coin conference, seminar and workshop fees are a lucrative earner for the AIPP. The right to give the tick to other providors of continuing development could be seen as a conflict of interest.

No way, said Ross. He said it’s easy for an outside organisation running an event to incorporate the CPD logo so professionals know it will contribute to their development within the AIPP.

Robert Gatto, managing director of Kayell (an AIPP sponsor), said that he often seeks CPD qualification for the workshops and events Kayell hosts. He consults with Kim Harding, AIPP events manager, before using the CPD logo and said he is rarely knocked back – however the event does have to reach a standard decided by the AIPP. There are no fees charged to OK an event as part of the program.

‘We allow our members – our accredited photographers – to accumulate their points anyway they want provided it’s considered a legitimate professional development. They have to do that every year,’ Ross said.

‘We have no intent of controlling anything – we simply want to see the standard that the industry is proud to adhere to,’ Ross said. ‘Every now and then we hear people say “the AIPP is trying to take over the universe” and that’s simply not the case. The only thing we’re trying to do is look after the profession as it moves forward. We’re not trying to do anything other than protect the profession to make sure it’s viable for others to follow after us.’

One thought on “AIPP Accreditation: ‘A vote of confidence for industry’”