If there’s two things the Instagram community will not tolerate, it’s photos of birth and ‘terrorists’, apparently. 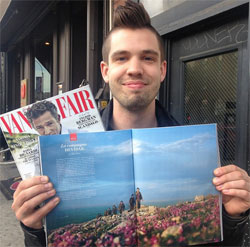 Lawrence, commonly referred to as Joey L., has had work licensed by everyone from the U.S Army through to Vanity Fair and National Geographic in his short career. Source: Joey L Instagram.

Young Canadian photojournalist, Joey Lawrence, is unhappy after scenes and portraits he captured of Kurdish rebels fighting the Syrian civil war were deleted from Instagram because they featured ‘terrorists’.

This occurred due to Instagram users reporting the image, citing this clause in the community guidelines: ‘Instagram is not a place to support or praise terrorism, organized crime, or hate groups.’

However the images on the 25-year old’s Instagram feed do not depict graphic or gory scenes, but intimate portraits and group shots of rebel fighters facing hardship – many of whom are female. 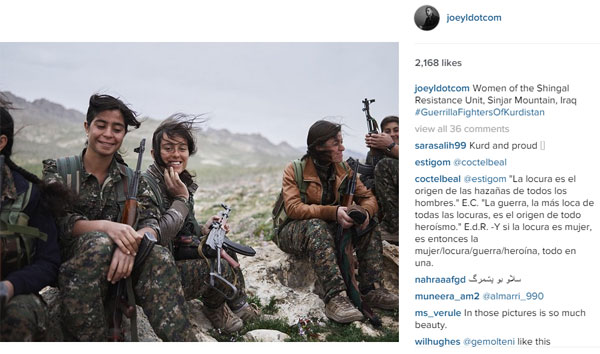 Is this photo and caption supportive of a terrorist organisation? Source: Instagram

While Instagram states it has a global team reviewing each complaint, it is hard to imagine much legwork being put into assessing the veracity of complaints or understanding the complexities of publishing newsworthy photos from unstable regions. Especially given photo editors at credible media outlets find themselves struggling with this exact topic!

The main image Joey Lawrence has drawn attention to is a portrait of ‘Sayra’ – a Kurdish woman fighting for the PKK – a group currently in conflict with ISIS which also has a long history of conflict with Turkish forces. This image, as well as other portraits and documentary photos, could be viewed as supportive of the guerrilla fighters. And only a handful of Lawrence’s 64,700 followers need to file a complaint for Instagram to take action. 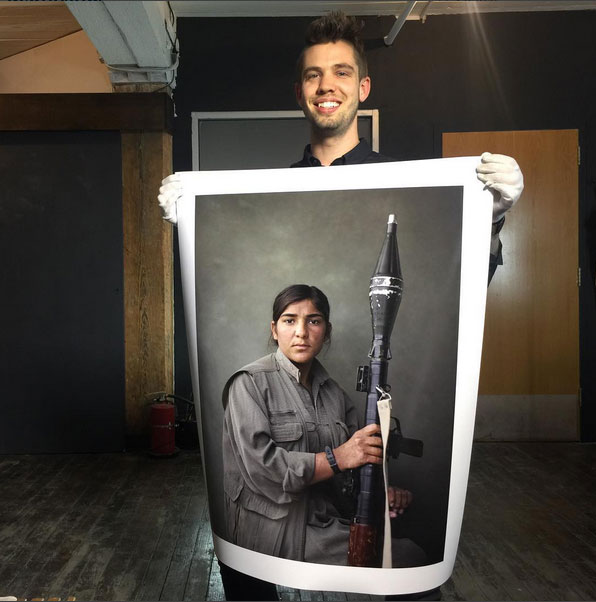 The portrait of Sayra which received complaints will be exhibited at London’s National Portrait Gallery. Source: Instagram.

But western governments and media seem confused as to whether the PKK are classed as terrorists or not.

Since ISIS has been depicted as the worst thing to happen to the region since, well, ever, and Kurdistan rebels have been reportedly backed by the US, media outlets sometimes frame the rebels as victims of the conflict – despite the PKK being labelled a terrorist group since 1997 by the US government. Which leads straight into Gerald Seymour’s classic quote: ‘one man’s terrorists is another man’s freedom fighter’ – or the ancient proverb ‘the enemy of my enemy is my friend’.

Lawrence said that Instagram is entitled to delete whatever it wants and isn’t in a position to ‘determine who is a “terrorist” and who is not’, however he views it as an issue of free speech. He feels those who reported the image may have been misled by state-owned Turkish media and silencing his photography is silencing an independent perspective.

‘Photography should be a conversation starter of intense dialogue and debate, but never silence. Silence is for cowards,’ Lawrence wrote.

Almost 4000 Petapixel readers agreed that Instagram shouldn’t have deleted the photo, whereas almost 500 think Instagram made the right choice.