When Bild, Europe’s best-selling tabloid newspaper, hit news-stands on Tuesday there wasn’t a single photo to be found on its pages – a direct response to readers who criticised the paper for publishing a confronting image of drowned three-year-old Syrian, Aylan Kurdi. 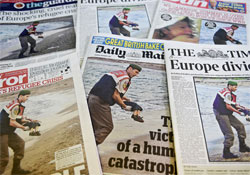 Most papers chose to publish the pictures of Aylan. Source: Andy Rain/API

Media outlets across the world were faced with a dilemma last week when images emerged of the drowned child.

Editorial staff had three main options: not publish the photos that had begun circulating on social media; publish the less graphic image of the boy’s limp body being carried by a policeman; or publish the more confronting image of the dead child lying face down on the shore line.

The Guardian was also caught up in the controversy.

‘The web story featured as its main image the picture of a solemn Turkish policeman gently carrying away Aylan’s body, while the arguably more vividly distressing picture of his lifeless body face down on the sand was used as a secondary image embedded beneath the warning to readers,’ Jamie Fahey, deputy production editor for The Guardian wrote, defending the publication’s decision following at least a dozen complaints. ‘As for the paper, the decision was made to run the striking image of human compassion – the policeman cradling Aylan – on the front page and the second image much smaller on an inside page.’

The majority of outlets decided to publish an image of the dead boy but opted for the less graphic picture, with Bild being a major exception – dedicating the entire back page to the image of young Aylan Kurdi face down. 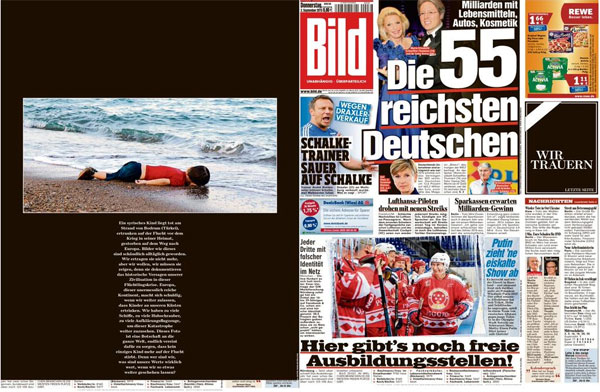 While most publications ran the ‘less graphic’ image on the front page, Bilden received backlash for running this on its back page. Source: Twitter

Pinney concludes the reason the photo received unprecedented media coverage is due to social media providing the media with ‘courage’.

‘We got to this point because individuals have had the balls to publish the pictures themselves on social media,’ Pinney said. ‘I think that gave the mainstream media the courage and the conviction to publish this picture.’

While these powerful images brought home the reality of the European refugee crisis and helped push governments including our own to alter their stance on (Syrian) refugees, some readers of Bild and other publications were offended. Enough so that Bild’s editorial team felt it necessary to make a big statement.

It removed all editorial photos and replaced them with grey boxes in the print edition, which reportedly sells 2.2 million copies a day. Images on the website and social media handles were also blanked out for most of the day. 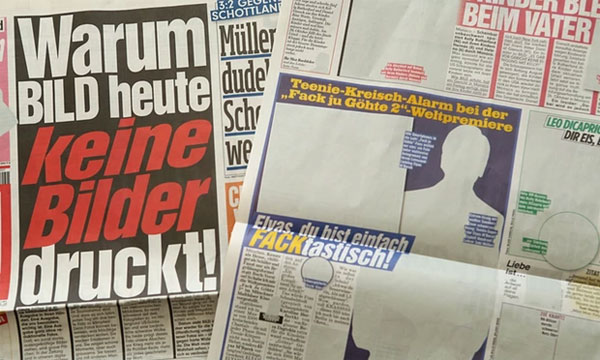 There’s something not quite right going on here… Source: Guardian

Bild, which means ‘picture’ in German, argued it was showing the ‘importance of photos in journalism’, and while the photo ’caused dismay and compassion’ it ‘rattled millions of people awake’. Bild concluded that it will always publish controversial photos despite ‘tough opposition’ because ‘the world must see the truth in order to change’.

The German tabloid – and many others – compared the images of Aylan Kurdi to Nick Ut’s iconic photograph of ‘Napalm Girl’ taken during the Vietnam War – a war which had public opposition significantly bolstered thanks to graphic photos coming from photojournalists like Nick Ut and Tim Page. 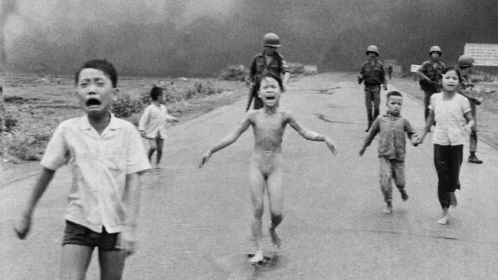 This photo shot by Nick Ut in 1972 won a Pultizer Prizer. New York Times editors were supposedly unsure about publishing it due to the nudity, but went ahead with it anyway.

Most articles exploring the significance of the image and the ethics of publishing it have been overwhelmingly positive about the message it transmits – although the majority were written by photo editors defending their decisions.

‘It’s a simple photograph that deals with an essential truth,’ Dimitri Beck, the editor of the French photojournalism magazine Polka told Time. ‘It’s not a sophisticated image, even in its framing, but the message is clear and direct: a kid has died and he’s being picked up like a washed-up piece of wood on the beach. There’s nothing more violent.’ 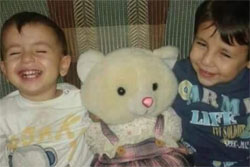 The Spectator published this photo of Aylan for O’neill’s article. But would it have had the same impact and effect on people as the graphic images?

One of the few articles critical of publishing photos of the dead child is by Brendan O’Neill, an ‘atheist libertarian’ columnist for The Spectator.

O’Neill views the sharing of the image by mainstream media and social media users as motivated by narcissism, rather than strictly humanitarian motives.

‘The desire to circumvent serious debate in favour of eliciting the visceral but ultimately pointless “Oh Jesus Christ” response is clear from the fact that these photos are often cynically cropped to exclude adults, in order to accentuate the vulnerability of the kid. Rather than focus on drowned adults, the Guardian and the Independent have instead focussed only on Aylan’s tiny, pathetic body.’

Some have been quick to point out – The Guardian among them – that publications like Bild have been critical of immigration in the past, describing the paper as ‘scurrilous, sensationalist and inflammatory’ and with a ‘fiercely nationalist’ undertone. The Guardian distanced itself from Bild, stating it ‘gave a prominent slot to a particularly shocking picture’, unlike most British newspapers that ran it ‘much smaller on an inside page’.

Regardless, support for the Syrian refugee crisis has begun pouring in. Time can only tell if this support will outlast the average news cycle, and further down the track history will tell if Nilüfer Demir’s photo of Aylan Kurdi becomes as iconic and important as Nick Ut’s photo of Kim Phuc.

Related: Should we censor war photography?